Cheap Trick is not ready to hang it up.

The veteran band from Rockford, members of the Rock & Roll Hall of Fame, delivered an impressive 19-song concert Friday night, June 7, at the packed Genesee Theatre in downtown Waukegan.

I’ve seen Cheap Trick numerous times over the years, and it’s been a long time since the band appeared so energized. There was a sense of urgency, a feeling that they were here to have a good time along with the fans. All that energy resulted in extended jam sessions throughout the show.

As usual, the band dug deep into its vast supply of songs and played some gems we hadn’t heard in a while. That’s one thing I love about Cheap Trick: The band never plays the same set list two nights in a row.

For example, this morning I checked on-line at www.setlist.fm for Saturday night’s songs  in New Lenox, a show I sadly was not able to attend. Sure enough, Cheap Trick played 10 different songs compared to Friday night. That blows me away. Most bands trade out one, maybe three songs. That’s probably one reason why the band has such a devoted following, in addition to the fact that these guys never stop touring.

A Chicago Tribune story on Friday said it’s been widely reporter the band has played more than 5,000 concerts since 1973. “I’ve heard that for many years, so it’s gotta be higher now,” bass guitarist Tom Petersson told reporter Annie Alleman. 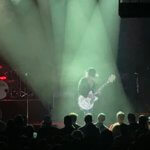 Anyhow, back to Waukegan.

After opening with the obligatory  “Hello There,” the band dug deep for “Lookout,” one of several surprises. Then it was off to “Big Eyes” which sounded a bit rough around the edges, making it more enjoyable.

It’s always good to hear “He’s a Whore” along with “Elo Kiddies.” The same goes for “Top of the World,” which featured an long lead-in by lead guitarist Rick Nielsen and ended with an extended jam session, after which Nielsen – chatty all night – joked “We are the one and only, accept no substitutes, Cheap Trick in Waukegan.”

Nielsen said the band was recently interviewed by 87-year-old Dan Rather for his “The Big Interview” show on AXS TV. No word on when that interview may air. Stay tuned, as they say.

Nielsen, 70, shows no signs of slowing down – yelling “let’s party” once – but I found it interesting that Robin Taylor Zander, the son of lead singer Robin Zander, also played guitar for the entire show. Cheap Trick is a family affair as Nielsen’s son Daxx has been the drummer for several years since the head-scratching departure of Bun E. Carlos. Yeah, I kinda miss Bun E., but Daxx does a very good job behind the drum set. He had a sweet solo leading into their cover of Fats Domino’s “Ain’t That A Shame.”

The band cranked up the intensity for “She’s Tight,” a rollicking good time.

Nielsen mentioned seeing Paul McCartney the previous night: “I said ‘Hello, Paul.’ He said ‘Hello, Rick.’ That was it.” McCartney was in concert Thursday night in Madison. “He looks great. I’ve never looked great in my whole life,” Nielsen quipped. Talking about the former Beatle introduced their interesting cover of “Magical Mystery Tour.” If you haven’t heard it, check it out on-line.

Remember how Cheap Trick is all about change? Further proof is how Petersson sang lead on two songs. He’s usually limited to one. After a four-star performance of “I Know What I Want,” Petersson, 69, held the spotlight for a rocking extended cover of The Velvet Underground’s “I’m Waiting for the Man.”  His growling vocals sounded great.

The same can’t be said for Zander on “The Flame.” It’s still a good song, but it may be time to retire it. Zander, 66, struggled with hitting some of the notes on the ballad. It wasn’t like the stirring, emotional rendition he delivered on a memorable rainy night at Taste of Joliet in 2015.

Zander sounded pretty good on the other songs, especially on “I Want You to Want Me,” one of the three songs that Cheap Trick simply must play in every concert. Another is “Dream Police, which was a lot of fun, especially when Zander playfully pushed Nielsen to the mic for his amusing rap in the middle.

One of the best moments of the night, at least for me, was when Zander told the crowd the band need their help and asked them so sing “oh, oh-oh” in the chorus of “Never Had a Lot to Lose,” with that great line, “my life’s a circus, an insane chain of circumstances.” I’m sure there are many circumstances after 46 years. Love to read that book one day.

Of course, the required “Surrender” was played – and it still sounds terrific – followed by the customary closer, “Goodnight Now.”

Some in the crowd were heard yelling “one more, one more,” but it didn’t happen. As a friend of mine mentioned after the show, “it went too fast.” The show was 90 minutes long.

If you missed seeing Cheap Trick this weekend, don’t worry. There’s always another chance to see this band. As Zander mentioned, they are touring with ZZ Top this summer. Cheap Trick will open for ZZ Top at First Midwest Bank Amphitheatre  in Tinley Park on Sept. 7.