On occasion there are stories and articles that are in keeping with a special day. Memorial Day is one Day that is a special day for all Military and Veterans, and their families and friends.  Heidi Anderson of the Novo Group, Inc. in Milwaukee cleared up a major question. Why have war veterans been reluctant to talk about their experiences?  This includes WW I, WWII vets as well as he post 9/11 vets as well.  What hit a specific nerve that why many Korean Vets did not talk much about being in South Korea, as did the other vets before us. It had been difficult for me to express myself till more than 15 years ago when I was given an assignment to help the greater South Korean Chicago community in Northern Illinois celebrate the signing of an end of hostilities across the 38th parallel. Then last year a good friend passed and I never knew he was a South Korean Vet as I am.

I had worked with Ronnie Born, an excellent musician, television producer and Emmy award winner and a Korean Veteran for nine years at WFLD-TV.  I didn’t discover until his passing last year that he too was a Korean Veteran, in the early 50’s. Specially in the 50’s when conditions were especially unpleasant.  It again recalled the comments, throughout the 50’s and 60’s: “Why were we there?”, “What were we doing there?”. “Oh, you’re back?”

Many us who are  Korean War Vets did not self-identify as being there or being in the military .  Ronny’s children said he was there and not much more. Every Korean Vet should consider that because we were there and what we accomplished, The Republic of South Korean is now the 11thlargest economically developed country in the world. South Koreans enjoy freedom, democracy and a place in world affairs. Heidi’s story below about her daughter and father offer the best reason why we as Veterans should have our oral histories recorded for our children. It’s the best story about the United States continued fight for freedom and democracy, and an example why we help all others as well.

My daughter Madelyn, now nearly 16 is studying WWII in her World History Class at Brookfield Central in WI. Today as we left Ft. Snelling National Cemetery in MN where my Father will be buried and my Mother, and their infant son are – she made a comment. “Mom, there are people who were in WWII buried there!!” I stopped in my tracks and looked at her shocked and said “Of course Maddie – GRANDPA was in WWII ( I must have told her that scores of times and he as well).” As only my daughter would she had to argue with me.

Later after speaking with my Dad, she said “Mom, Grandpa said that all of his brothers were in WWII”. And of course I stopped again and said Maddie – “You need to ask him again, he (age 93 hearing) probably didn’t quite understand what you were asking”.

So we had this conversation at the Mall of America in front of the traveling tribute wall (near to Ft. Snelling). His Dad, he and each of his brothers sans one served in a war – ranging from WWI all the way to Vietnam. They all came home which is extremely fortunate. Carl F, J. Forrest, Wallace, Kieth, Roger, Billy, Carl, Dale, David, and even my Aunt’s husbands Arlo and Ron. They all served and all came home. On my Mother’s side it is similar although they lost one of her Uncles in WWI. For the younger generations – many of my cousins and her Godfather Paul served. Of course her eyes were glossing over by then. although they lost one of her Uncles in WWI.

What an amazing gift that my parents were both here for so many years of my children’s lives. Yet the reality is that we (and kids) pay attention when it is important to us. So for Madelyn, her H.S. class was that reason and I am glad she finally registered with her Grandpa’s and family’s service in every conflict since WWI.

That leaves me with a thought and challenge to think about. While we (in HR) rightfully focus on supporting the transition and hiring of our Veterans from more recent wars and conflicts – how are we supporting the preservation of their values and sacrifices in the minds and ideas of our youth? Is that not important as well? Certainly books and memorials play a part. But shouldn’t we find a way to connect and make meaningful interactions between those who can share while they are still here and our youngest, greatest hopes? Nothing beats touching, feeling, experiencing. I am going to make sure both of my girls benefit from these stories while they still can in our family. Professionally, I will be thinking about ways to enable that as well. My thoughts for this Memorial Day… wishing you a beautiful one of thoughtful remembrance.

Just an added comment: For the Veterans today it is our responsibility to carry on the legacy of why we cherish and fight for our freedoms. That’s freedom with a plural. It is up to all Veterans, we must continue by pass on and honor those who sacrificed and suffered hardships that military, and the efforts from the families at home gave to protect our freedom. It’s why we are appreciative of our freedom. It’s why Veterans need to instill in future generations, the message on the Korean memorial in Washington D.C.  ‘’FREEDOM IS NOT FREE’

One last thought. I was talking with a Navy Veteran who was on a ship off South Korea. “I didn’t do much, never heard a bomb or artillery gun go off. I don’t feel like a Korean War Veteran, so I never joined a Veteran’s group or participated” So Wrong. When we need supplies, clean uniforms, medical supplies and the necessary other supplies, and rations, the Navy and Air Force was on the spot. The combined efforts of all Military gave the South Korean freedom. If you might be anything like our Navy man, who feels he was not important,  join a Veterans groups today, you were and are part of the team.

Comments are welcomed at jerrychicago710@gmail.com 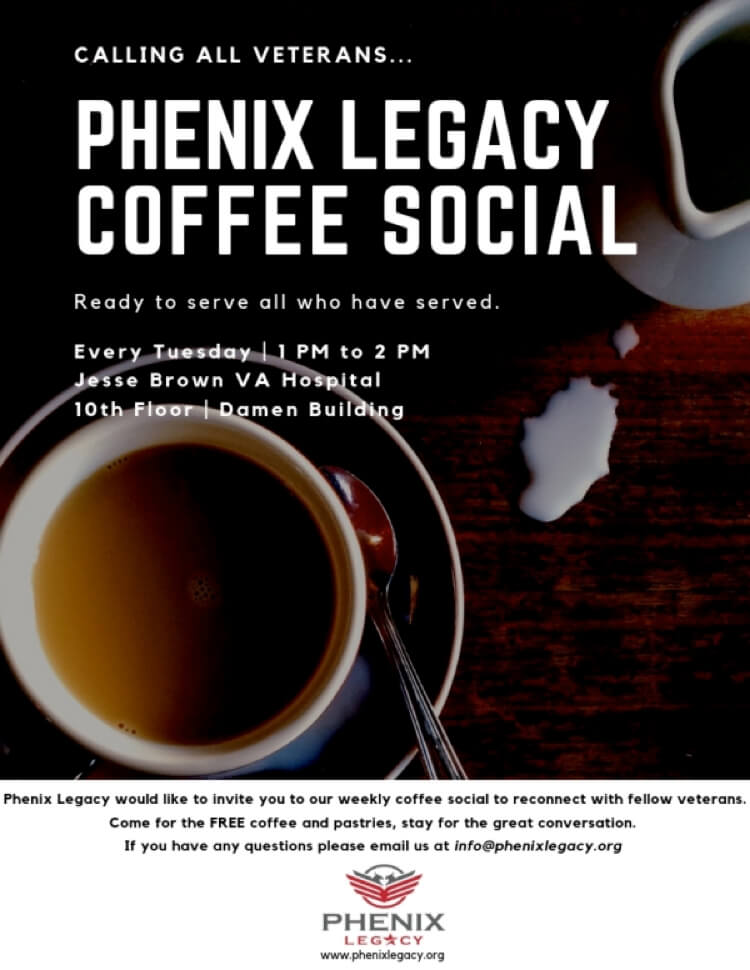 HOBART — Groundbreaking could be a few months away for an $11 million apartment complex for low-income veterans.

A Safe Haven will build the 75-unit facility.

A Free weekly discussion of topics of interest to Veterans with leader Alberto Lopez, no obligation-  join the group and add a topic or subject . 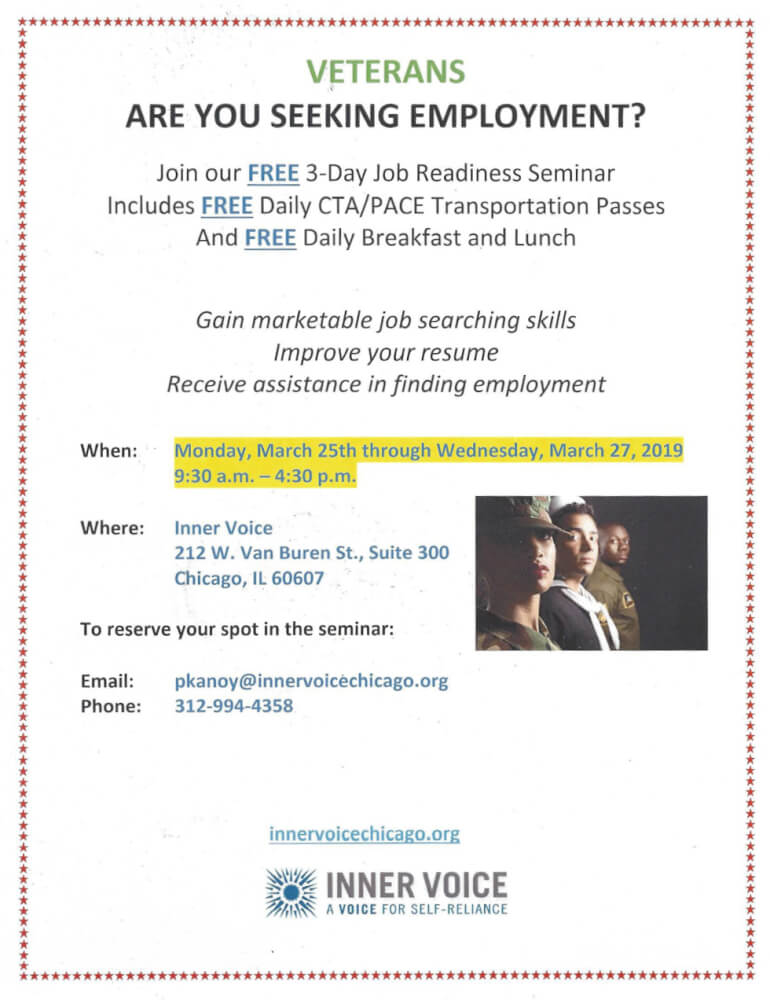 FREE TO THE VETERAN COMMUNITY

Starting on February 1, 2019, our office launched a pilot program expanding free City Stickers for many of our City’s Veterans. Residents who have

an Illinois Driver’s License or State ID with a Veteran’s designation issued on or before December 31,2018willbeeligibletoreceiveoneCitySticke,r for a passenger, large passenger or motorbike for free.

Ex-Prisoners of War, Purple-Heart Veterans, or disabled veterans with Illinois XP, PR, IS, or DV plates will remain eligible for Chicago City Vehicle Stickers for nofee.

Please note that residents can only take advantage

of this offer at Office of the City Clerk locations. There will be no refunds for already issued stickers, people will qualify when their sticker is up for renewal.

Governor Pritzker needs a reboot on his tax plan Blogger