The village of Bridgeview will be getting two warehouses at the northeast corner of 79thStreet and Harlem Avenue.

At its July 18 meeting, the board approved a letter of understanding between Sponte Sales, doing business as Hawk

“This is the sale of the south half of the shopping center on 79thStreet, about $2.2 million. The plan is to build two warehouses, close to one million square feet,” Mayor Steve Landek said.

“it’s a good win for our community. Retail is not going to be our future, I don’t think it’s anybody’s future at this point. We’re glad to take that piece of land and convert it into a profitable enterprise,” Landek said.

Sponte Sales will be doing business as Hawk Auto.com, the agreements states.

The village bought the land years ago, Landek said. “The retail section is doing well now,” he said.

The warehouses will be built on approximately 16 acres on the north side of 79thStreet, east of Harlem Avenue, behind Haunted Trails.

“We think it will be a parts warehouse,” Landek said “It’s the recovering economy. It’s been a long time coming.”

That’s part of a shopping area that has been acquired by the village for development. 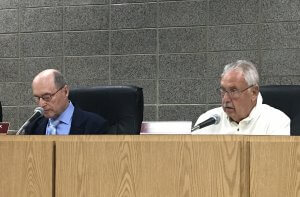 In other business, the board approved a request from public works for a new excavator. The price will be $168,000, Village Trustee James Cecott said.

The village board approved a new contract with the union representing fire lieutenants. It includes a pay raise of 2.5 percent for each of the three years, Landek said, adding, “it’s fair for everybody.”

The board approved a special use permit for a truck repair shop, to work on company-owned vehicles only, at 9720 Industrial Drive.

The board also approved two side yard variations which will allow construction of single-family homes at 7606 W. Octavia Avenue and 8633 S. 78thAvenue.

The board promoted Corey Flagg from part-time to full-time police officer.

And, the board approved an agreement with CSX Transportation for a sound wall.

The wall will be built on the east side of the tracks, between 75thStreet and 79thstreets, along Ferdinand Avenue, Landek said.

“It’s part of their transportation plan as they expand rail. This project is probably worth $4 or $5 million,” Landek said.

Noting how busy the board meeting was, Landek said, “We haven’t seen a lot of these ordinances in a long time. It’s all good news for our community.”