The Illinois Tollway Authority, which has come under attack by the Daily Herald, has done what many public agencies continue to fail to do and that is to live within their spending approving a balanced budget for the coming year. Despite this, critics continue to play politics and attack the Tollway in the hopes of advancing their cronies and selfish agendas

The Illinois Tollway Authority is under siege. Not by motorists but by a political movement determined to put their friends, cronies and pals into office to serve their agendas. One of the groups pushing this biased agenda is the Arlington Heights Daily Herald which has run a series of one-sided stories and published personal attacks to support their political cronies in the agency and on the board.

The Daily Herald Newspaper is like many mainstream major news media and have become politicized, driven by a political agenda instead of a journalism agenda. So the transportation reporter, Marni Pyke, has been publishing one-sided articles slamming the Tollway in order to support their friends, pals and cronies at the Tollway who have been pushed aside because of administration change. Pyke’s reporting looks more like opinion commentary (as this column is openly) than professional journalism reporting which is should be.

Of course, the Arlington Heights Daily Herald, where I once worked as an opinion columnist and where I won a Peter Lisagor Award for those columns, has transformed into a political advocacy group when it comes to reporting on the Illinois Tollway Authority.

The public sees through this veneer of bias and he motives for their continued assault is obvious to the public. Worse, however, and as a disservice to the best interests of the public and the taxpayers is that the Arlington Heights Daily Herald has been intentionally ignoring what the Tollway does. In other words, they publish their one-sided attacks and ignore the day-to-day business of the Tollway and the Tollway’s achievements. 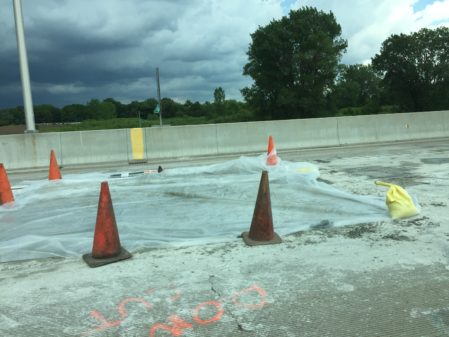 Below is a news release from the Illinois Tollway Authority that is of significant importance to the taxpayers of Illinois. The Tollway has adopted and approved a balanced budget meaning that the Tollway is living within their means, despite the exaggerated and distorted coverage from the Arlington Heights Daily Herald.

You can bet that if the Tollway had approved a budget that was imbalanced, or that had a deficit, the Arlington Heights Daily Herald would assert it is an example of poor leadership.

That bias proves that adopting a balanced budget is in fact a demonstration of the Tollway’s great leadership, a leadership that the Arlington Heights Daily Herald opposes not because of performance but because their pals, their cronies and their selfish political agenda.

This week, the Arlington Heights Daily Herald has taken their biased reporting and packaged it as a lobbying move to influence newly elected Gov. J.B. Pritzker hoping Pritzker responds to the newspaper’s negative coverage rather than to the reality.

Hopefully, Governor-elect Pritzker can see through this obvious newspaper bias and focus on what’s best for the people of Illinois, not for the newspaper which continues to seek to make itself relevant not through great reporting but through “reporting” that reads more like opinion and a biased campaign of coverage.

The lack of journalistic professionalism by the Arlington Heights Daily Herald is another example of how the mainstream news media has lost its mandate and is turning instead towards sacrificing professionalism for corporate profits and political gain. That’s not the answer to the newspaper’s declining readership.

Here is the Tollway’s press release, that you won’t read in the Arlington Heights Daly Herald because it undermines their one-sided hyperbole and attacks:

The Illinois Tollway Board of Directors today approved a balanced 2019 Budget, anticipating $1.5 billion in revenues allocated to fund maintenance and operations, debt service transfers and capital investments for the 294-mile system.

In addition, the budget will allow the Tollway to commit $1.4 billion for capital spending for the eighth year of the agency’s 15-year, $14 billion capital program, Move Illinois: The Illinois Tollway Driving the Future.

“The Tollway is committed to strong fiscal management and customer service,” said Illinois Tollway Executive Director Liz Gorman. “We are pleased to deliver a balanced annual budget for Board approval that puts the public’s money into projects and services that improve travel and safety on our system.”

The 2019 Budget allocates revenue to support infrastructure with more than $1.1 billion for direct funding and debt service on capital investments, as well as $365 million for maintenance and operations – an increase of just $13million over the 2018 operating costs.

“We are committed to delivering first-class service and roadways to our customers and working with other local and state agencies to improve mobility throughout the Northern Illinois region,” said Tollway Board Chairman Bob Schillerstrom. “As we reach the midpoint of our capital program, we are focused on keeping our existing roads and bridges in a state of good repair and delivering new infrastructure to support the regional transportation network and accelerate the wheels of commerce.”

The Tollway’s 2019 Capital Program calls for investing $1.4 billion in 2019 for the eighth year of the Move IllinoisProgram with $397.6 million budgeted for systemwide roadway and bridge repairs and technology investments tokeep the existing Tollway system in good repair and funding for key projects including continued planning and advance construction for the new I-490 Tollway and new interchanges connecting to the Jane Addams Memorial Tollway (I-90), Tri-State Tollway (I-294) and access to O’Hare International Airport, as well as reconstruction of the Central Tri-State Tollway (I-294) and $28 million to begin work to complete the I-294/I-57 Interchange.

The 2019 Budget anticipates $1.5 billion in 2019 revenues, an $55 million increase over the current 2018 estimate, primarily due to continuing increases in toll transactions coupled with a truck toll rate increase previously approved by the Tollway Board in 2008. The 2019 estimated revenues include $1.47 billion is from tolls and evasion recovery, $30 million is from investment income and $10 million is from concessions and miscellaneous revenue.

In keeping with the Tollway’s commitment to increasing transparency and accountability to the public, the 2019 Budget is posted on the Illinois Tollway website illinoistollway.com for public review. The Tollway offered a number of opportunities over the past two months for public participation in the annual budget process, including public hearings in Rosemont, Aurora and at the Tollway’s Downers Grove headquarters.

The Illinois Tollway’s 15-year, $14 billion capital program, Move Illinois: The Illinois Tollway Driving the Future, is improving mobility, relieving congestion, reducing pollution, creating as many as 120,000 jobs and linking economies throughout the region. The first six years of Move Illinois are on schedule and within budget, delivering the new Illinois Route 390 Tollway and a rebuilt and widened Jane Addams Memorial Tollway (I-90) with its new SmartRoad corridor, as well as opening a new interchange connecting the Tri-State Tollway (I-294) to I-57. Progress continues on projects addressing the remaining needs of the existing Tollway system, delivering the new I-490 Tollway Project and reconstruction of the Central Tri-State Tollway (I-294) and planning for emerging projects.