Bridgeview Bank, a community bank founded in Bridgeview in 1971 and which emphasized a personal and small business focus, has agreed to be acquired by First Midwest Bank in a cash and stock deal valued at $145 million.

The agreement was announced Thursday by both financial institutions.

“First Midwest has created significant momentum over the years because of its market-leading commitment to relationship-based banking and to providing a wide array of banking products and services. We very much look forward to joining them,” Peter J. Haleas, Chairman of Bridgeview, said in a release. “Our clients will continue to have the highly personalized service they have come to expect from Bridgeview Bank, now with the added benefit of a broader range of products and services combined with larger scale.”

“We are very excited to welcome Bridgeview Bank clients and colleagues to First Midwest,” Michael L. Scudder, Chairman, President and Chief Executive Officer of First Midwest, said in the release. “Bridgeview is a well-established and trusted financial institution with deep client and community relationships, which we look forward to continuing. Joining forces with Bridgeview brings to all of our clients an expanded footprint across Chicago and further enhances our position as metro Chicago’s premier commercial bank.”

Bridgeview has assets of $1.2 billion, which includes $1.1 million in deposits and $800 million in loans. The bank has 13 branches, including five on Chicago’s north side, one on the Southwest Side and the rest scattered across the suburbs. Most of those locations are expected to remain open.

The bank’s mortgage division was not included in the deal.

Bridgeview Bank almost fell victim to the Great Recession and financial crisis. The bank received $38 million in bailout funds from the U.S. Treasury Department as part of the Troubled Asset Relief Program.  Those shares were later auctioned off to private parties.

Founders Peter and Tom Haleas were able to raise $47 million in 2015 to redeem those shares and maintain control of the bank.

First Midwest is one of the largest independent publicly-traded bank holding companies based on assets headquartered in Chicago and the Midwest, with over $15 billion of assets and $11 billion of trust assets under management.

Founded in 1940 in Joliet, First Midwest became a publicly traded company in 1983.

The transaction is subject to customary regulatory approvals, the approval of Bridgeview’s stockholders and the completion of various closing conditions, and is anticipated to close in the second quarter of 2019.

If you see a new business in town or wonder what happened to an old favorite, drop me a line at bobbong@hotmail.com. You can track business openings and closings at http://bobbongonbusiness.com/
Latest posts by Bob Bong (see all)
SHARE THIS STORY
Business, Features Tags:Bob Bong, Bridgeview Bank, Business column, First Midwest Bank. sales 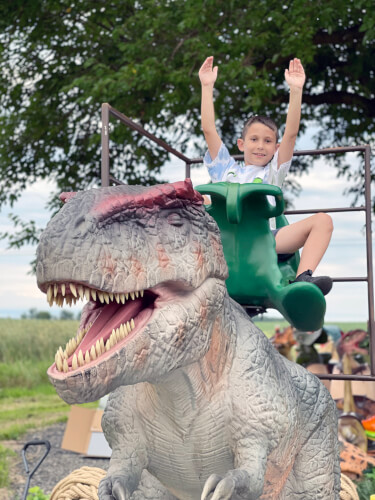 The Age of the Dinosaurs is Coming Soon to Northwest Indiana’s Family-Fun Farm Park Entertainment
Where had the Willis Tower Globe gone? Business