Seldom has a thump sounded so sweet.

“I just shut my eyes, I put my hand up and I heard a thump. I saw the ball flying toward the end-zone and then I saw Nathan Lugo recover it.” Nazareth senior lineman Louie Stec said late Saturday afternoon

That “thump” was Stec blocking a punt with Nazareth up 14-7 in the second quarter and played a key role in Nazareth’s 47-28 win over Batavia in a Class 7A semifinal in snowy La Grange Park.

Officials ruled Lugo recovered the ball at the half-yard line. On the next play, Nazareth’s Dylan Smith bulled in for a 21-7 lead with 7:57 left in the first half.

Stec had forced the punt after, on the previous play, he sacked quarterback Jack Meyers on third-and-9 at Batavia’s 32-yard line.

Stec, who starts on the offensive and defensive lines, is “old school” Coach Tim Racki said.

“He’s a state contender wrestler, a tough kid. He’s soft-spoken off the field. You’d never know he’s the force he is on the field,” Racki said.

Stec’s one-two punch that will long be remembered by Nazareth faithful, who saw defense and special teams share the spotlight with the team’s typically explosive offense en route to a shot at the a Class 7A state title. 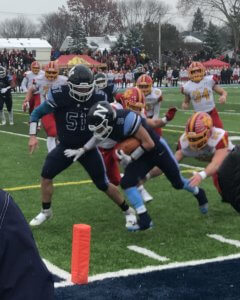 Alex Carrillo, with blocking from Louie Stec, scores the first Nazareth touchdown vs. Batavia on Nov. 17. Nazareth plays for the Class 7A title on Saturday. Photo by Steve Metsch.

“We know (the) defense has our back. We know special teams have our back. Everything’s working out. This is amazing,” quarterback J.J. McCarthy said.

The defense held Batavia to 227 yards while Nazareth rolled up 430 yards of offense.

Nazareth (12-1) next plays St. Charles North – which beat Mount Carmel – on Nov. 24 at the University of Illinois’ Memorial Stadium.

“There’s no school this week, so it’ll be all football and eating food,” Stec said with a smile.

There were a lot of smiles and hugs after a special teams special play iced the win.

Moments after Zach Weber grabbed a 15-yard scoring pass from Meyers with 1:08 left in the third quarter, cutting the lead to 35-28, Batavia grabbed the momentum. Or so it seemed.

Derrick Strongs, Jr., caught the ensuing kickoff at his own 19. He darted across the field toward the Nazareth sideline. Seemingly caught near the 40, he wriggled free and ran to the north end-zone for a 41-28 lead.

“You’re not going to win a game if special teams can’t convert and get the job done, said Jansey, who will play for Northwestern next year.

Love, who caught three passes for 100 yards, scored on a 61- pass play and added TD runs of 1 and 28 yards. Love could’ve scored twice more but each pass was picked off by Jackson Williams near the goal-line.

Receiver/defensive back Diamond Evans, never one to be called reserved, played air guitar and danced on the field in the closing moments.

“They were playing scrappy all day. I got punched. Just to dance on them, to watch them look so sad and defeated, it felt great,” Evans said. “These boys put a lot of work in. It’s great to see them happy.”

Evans made a big catch in the third quarter.

Leading 28-21, McCarthy rolled right and found Evans for a 31-yard-gain on third-and-two at Batavia’s 40 to set up Smith’s second touchdown and a 35-21 lead.

“I saw Diamond one-on-one. I’ll take that any day,” said McCarthy who went 17 for 26. Five catches were made by Breven Reifsteck for 91 yards.

“It’s so special to lead these seniors all the way there,” McCarthy added. “I couldn’t do it without them. I love them so much.”