National Night Out in Lyons

Residents of Lyons got to know their village departments, specifically police and fire, a bit better on Aug. 7.

That’s when Lyons, for the third straight year, participated in National Night Out, which was being held in widespread communities for the 35thyear.

It’s a way for communities to forge stronger links with their police and fire departments. And, a way to send a message of unity to criminals.

“When you think about it, the police and fire departments do not close, they are open 24/7, and they provide a great service to our residents,” Mayor Christopher Getty said.

“It’s important we know who these people are,” Getty added. 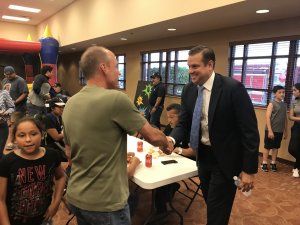 Lyons Mayor Christopher Getty greets a well-wisher during the village’s National Night Out, moved into the village hall thanks to rain the evening of Aug. 7. Residents heard from the police and fire chiefs, and Getty. Photo by Steve Metsch.

“The fire department and village are consistently working together to move forward,” Nord said.

Police Chief James Keating covered a wide range of topics, noting that the department is adding new officers to replace those who are retiring.

“It’s good to have change,” he said, adding that the department also has three new vehicles equipped with license plate reading technology that tells officers if the owner is wanted by the police.

Keating encourages officers to get out of their squad cars and visit with residents. It’s similar to the community policing concept started by the Chicago Police Department 20-some years ago when Keating worked there.

“For the third year in a row, index crime is down in Lyons,” Keating said. “In the village of Lyons, the most notable crime we have is thefts and shoplifting.”

Citations for speeding and traffic violations are up 15 percent.

“I’ve never seen a community with so many traffic accidents, and I worked the West Side of Chicago for 15 years. First Avenue, Harlem, Ogden,” Keating said.

He’s happy he became police chief in Lyons, calling it “a good village with good residents.”

Around 100 or so residents attended the event, moved inside the village hall because of rain.

Mary Elaine Bensfield, a 40-year-resident of Lyons, recently moved from her home to Lyons Grove, a development for seniors west of Lawndale Avenue.

Her daughter, Mary Ann Koudelik, who grew up in Lyons and now lives in Darien, thinks her mom is “definitely” safe living in Lyons.

Bradley Randolph, 29, was impressed by what he heard, especially from Keating.

Randolph, who now lives in Brookfield, said he is “actually looking into moving to Lyons.”

“I have an apartment right now and I still want to be around people I grew up with. I grew up in La Grange and moved to Brookfield. I think Lyons is safe. I always see the police patrolling,” Randolph said.

Dianna Golden, 42, said “Lyons has the best police and fire (departments) I’ve ever seen. The police officers and firefighters understand and are very friendly.”

Those attending were treated to free taco dinners from El Meson, a Berwyn restaurant.