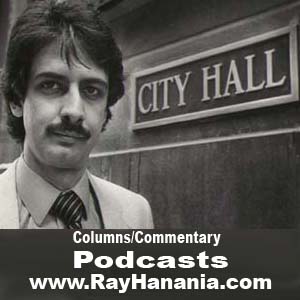 Most mainstream American journalists love to dish it out and criticize people, but they are thinned skinned and hate to be criticized themselves, especially when they are involved in their own conflicts-of-interest that they fail to mention in their stories. As a columnist who writes my opinions, I also manage a media consulting business. And when I write about a client, which is rare, I disclose it publicly in my writing.

Democratic Gubernatorial candidate J. B. Pritzker met with 30 mayors, legislators and Township officials from Chicago and the Southwest and West suburbs last week, something a candidate hoping to win office should be doing.

Not a fundraiser, Pritzker introduced himself to the officials who represent more than 750,000 Illinois residents and discussed the issues.

The Sun-Times Dan Mihalopoulos did a story on the meeting, but if you read it, you would have thought it was a secret meeting undermining the U.S. Constitution. It was filled with petty personal attacks reflecting Republican Bruce Rauner’s petty politics.

Most mainstream journalists are thin-skinned hypocrites. Their egos are bigger than their faked-up stories. They dish it out, but hate to be criticized. They can’t take it. So I expect Mihalopoulos will complain about this column.

In addition to writing my opinions each week here and elsewhere, I also manage media relations for several government clients in the Southwest Suburbs. I’m not a reporter. I am an opinion columnist, with 40 years experience in government and politics. 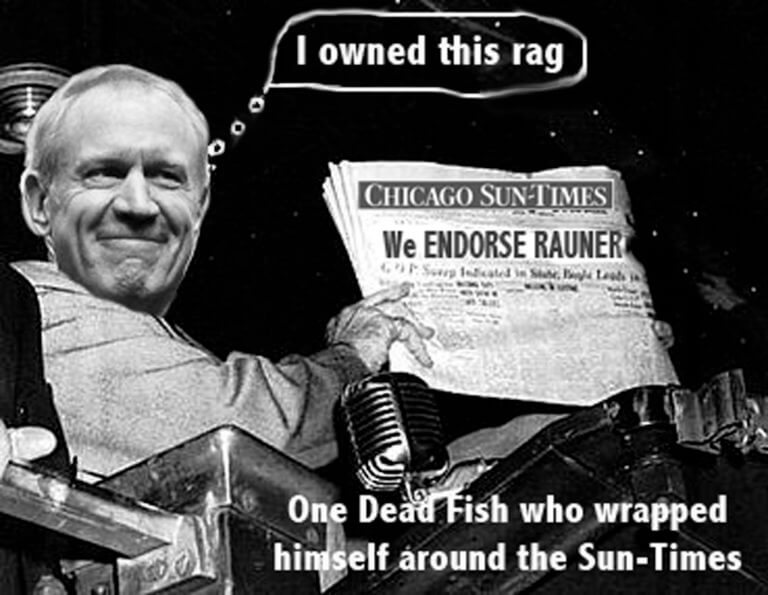 Meme of the Chicago Sun-Times endorsing Bruce Rauner, who owned a major share in the newspaper. Now the newspaper seems to do his political bidding. (Former Truman photo courtesy of Wikipedia)

When I write about a client, which is rare, I ALWAYS disclose it in my writings.

Not Mihalopoulos, who turned his column into an Attack Ad against Democratic House Speaker Michael Madigan. Mihalopoulos left out that Rauner was a major owner of the Sun-Times, with a 10 percent stake in Wrapports LLC which owns the Chicago Sun-Times where Mihalopoulos is employed, until deciding to run for Governor.

Worse, Mihalopoulos didn’t mention that the Sun-Times, after abandoning endorsements for three years, came out of retirement to endorse Rauner in 2014. Did it have anything to do with the $65 million Rauner spent on media advertising? Click here for other allegations of Rauner influence on the Sun-Times. And another story on Rauner lobbying Sun-Times to squash a negative story.

It is hypocritical when Mihalopoulos attacks one of my clients, Cicero President Larry Dominick, saying that if you wanted to run for office in Illinois, you probably wouldn’t want to woo Dominick or be seen with him, but Mihalopoulos remains silent about his newspaper’s own “clients,”  like Rauner, and nothing about his employer’s conflicts of interest or blatant political ties.

Truth doesn’t do well at the Chicago Sun-Times, one of the most conflicted newspapers in the country. Not even a dead fish would want to be wrapped in that dying newspaper’s fading newsprint.

What Mihalopoulos doesn’t get, or will report, is that Dominick does more for Cicero than the Sun-Times has ever done for its own readers.

Under Dominick, street gang-related shootings and deaths drop dramatically from 65 shootings and 14 deaths in 2004, the year before he was elected by Cicero voters. Last year, there were four shootings and one gang related death. It’s been like that for most of the 12 years Dominick has been president. The Sun-Times doesn’t report that.

Dominick’s Cicero offers unique programs providing jobs to the disabled, offering extensive services to senior citizens and overseeing a program to discourage gangs and increase community involvement. Cicero absorbs more than half of Chicago’s water rate hikes, held property tax increase to a few percent in the past 12 years, and has attracted 30 major new businesses including WalMart, Sonic and Menards.

Senior services are extensive: for Seniors, the Town has a handyman program to repair windows and paint, shovel sidewalks and mow lawns. They provide free transportation to seniors to and from doctors offices, grocery stores. And they offer two dozen free activity programs throughout the year. Click here for more details on what Cicero does for senior citizens.

Mihalopoulos doesn’t think Cicero is worth a positive story, but publishes muddied up rumors at the ethically challenged Sun-Times because mud sells at the Sun-Times. Truth doesn’t.

How do you defeat street gangs? In addition to a strong Police Department – Dominick rose to the rank of Deputy Police Chief during his 20 years as a cop – you have to get homeowners out of their homes to become engaged in year-long community programs and festivals.

Dominick launched “Parent Patrols” which has 250-plus resident volunteers who help students to and from schools, a strong deterrence to street gang influence.

If Mihalopoulos or the Chicago Sun-Times ever figured that out how to prevent gangbangers from murdering children in Chicago each week, the Sun-Times wouldn’t have screaming headlines to run and would probably go out of business.

To the mainstream news media “if it bleeds it leads” is not just a slogan, it’s a revenue-generating system. The newspaper thrives on the suffering of everyday people. They profit from the record killings that overwhelm Chicago.

They don’t want to stop the killings. If they did, many of the hypocrites at the Sun-Times would be out of jobs.

Biased reporters love to attack Madigan and suburban mayors like Dominick, but they defend their pals like our do-nothing governor and Sun-Times investor, Bruce Rauner.

(Ray Hanania is an award winning columnist, author and former Chicago City Hall reporter. Email him at rghanania@gmail.com. President & CEO of Urban Strategies Group, Hanania mentions one of his clients int his column, the Town of Cicero.)