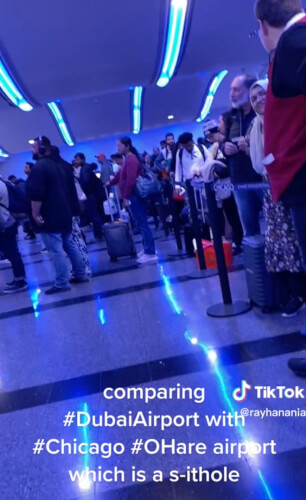 Merry Christmas and Happy New Year to readers, and the tragedy of O’Hare Airport

Ray Hanania writes to wish everyone a Merry Christmas and describes the horror of having to travel through O’Hare Airport’s filthy, disgusting condition while Chicago Mayor Lori Lightfoot promotes her candidacy for re-election in nauseating ads that repetitively broadcast over O’Hare Airport TV screens

At a time when newspapers are dying, it is gratifying to hear from so many people in the Southwest suburbs who read this important community newspaper.

I want to wish everyone a Merry Christmas and a Happy and Prosperous New Year.

It doesn’t matter what your political are, or your ethnicity or race or nationality. We’re all Americans and we live int he greatest country in the world.

Of course, I wish there was a little less hate from both sides. We can have discussions, disagreements and even passioned debates without hating each other.

I avoid most of the news and talk shows on television, these days. They are driven by angry hate and they fuel the hatred that divides this country.

If we don’t do something about it, to stop the hate, end the animosity over politics and focus instead on how to help each other, we might find ourselves in a lot of trouble folks.

MY TRAVEL TO DUBAI: I traveled to Dubai last week to attend a journalism conference hosted by Arab News, the Gulf Newspaper I work for as the US Special Correspondent.

While the American news media continues to deteriorate, the Middle East news media is growing. They had more than 160 journalists there from 10 bureaus in Saudi Arabia, the UAE (Dubai), France, Pakistan, Japan, England, Asia and, with me, the United States. All anyone talks about overseas is the polarization that has crippled America and the fragile leadership that is so divided, angry and unproductive.

But that’s not the worst thing that shocked me during the trip. The absolutely most shocking thing I experienced was the deterioration of O’Hare Airport.

O’Hare was filthy. The bathrooms were disgusting. The process of moving passengers through customs and to their planes is bogged down in laziness and poor employee service.

Honestly, the place smelled. It was a pit. I wanted to take a show in hand sanitizer when I was out of there.

It was the worst experience of my life. Customs was terrible. On returning from Dubai, I had to stand in a line of people that zigged zag through a maze of 22 roped areas (walking back and forth) for nearly three hours. The place smelled, I wanted to barf it was so bad.

The attitude of the customs officials was so terrible. Like they were angry I was returning to this country.

The baggage area was a mess with luggage piled on top of each other because the conveyor belt was jammed with bags because they couldn’t process the travelers fast enough. It was crowded and the room was small.

I couldn’t wait to get out of there,

Contrast that to Dubai, where the system was so clean, efficient and fast. They were welcoming to everyone.

Is Dubai that much better than America?

Worse is that through all that filth, I had to walk past dozens of TV terminals broadcasting an expensive advertisement over and over again promoting Chicago Mayor Lori Lightfoot.

And even worse is that while I struggled to enter this country as a law abiding, legal traveler, I couldn’t stop thinking about how much more attention and support illegal aliens who sneak into this country illegally get when they cross the southern border.

Next time, I’ll enter the country illegally and avoid customs. I am sure I will be treated better and even given a free ride to my home with so many benefits: food, healthcare, insurance, education for my kids and even money to make my illegal experience productive.

Check out my Tiktok video comparing O’Hare to Dubai at my page at Titktok.com/@RayHanania. (Even if you don’t like politics, you can see the videos of me making Middle Eastern foods which I hope you will enjoy.)

Comment (1) on “Merry Christmas and Happy New Year to readers, and the tragedy of O’Hare Airport”