Illinois Secretary of State’s race is a mess

Most elections are pretty much decided before voters even get to go to the ballot box. But the race for Illinois Secretary of State is wide open, but it’s a mess. No one is really talking about the real issues that exist in the massive statewide office that has more than 4,000 employees and provides so many important services to citizens. The focus is on race, politics and little else

A lot of elections are pretty much cut and dry, easy to sort out and good and bad candidates are distinguishable. But that’s not the case in the race for Illinois Secretary of State.

There’s Alexi Giannoulias, a friendly guy who served one term as Illinois Treasurer from 2007 to 2011. I know him. Nice guy, but the kind of politician who only talks to you when he needs something.

Giannoulias has all the big bucks, more than $4.4 million in his campaign war chest, raising more than $500,000 just in the first quarter.

Then there is a guy like David Moore who grew up in the rough and tumble Robert Taylor Homes who was inspired to get involved in politics after hearing one of Mayor Harold Washington’s many moving speeches.

Moore is a real pick-himself-up-by-the-bootstraps story who has served as Alderman of Chicago’s 17th Ward since 2015. Moore has less than $39,000 available for his campaign.

Then there is Anna Valencia, who boasts the endorsement of retiring Secretary of State Jesse White. Valencia comes from the circle of clout having worked with the racist former Chicago Mayor Rahm Emanuel, although later she improved and worked as Campaign Manager in 2014 for U.S. Senator Dick Durbin, a very popular centrist with good programs.

Valencia was appointed in 2016 to the office of City Clerk by outgoing Clerk Susana Mendoza who is now the Illinois Comptroller. She was elected Chicago City Clerk in 2019.

Politics is so incestuous, I guess. Valencia has $1.1 million in her campaign war chest and probably will raise more with White’s backing.

If you just go by the money, Giannoulias has this wrapped up. If you go by clout, Valencia has White’s endorsement, who held the office of Secretary of State since 1998, or 24 years. But if you think other issues are more important, Moore has the most inspiring story. 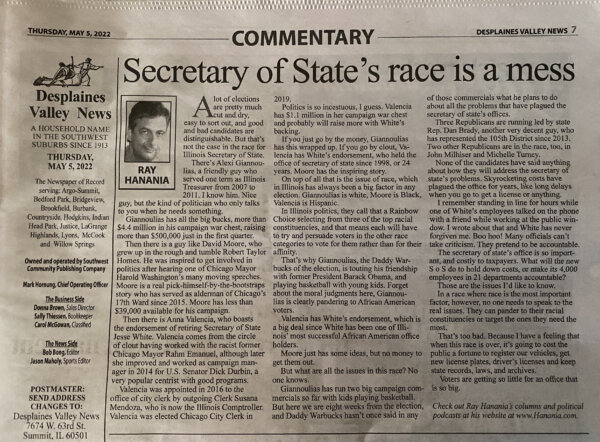 On top of all that is the issue of race, which in Illinois has always been a big factor in any election. Giannoulias is White, Moore in Black, Valencia is Hispanic.

In Illinois politics, they call that a “Rainbow Choice” selecting from three of the top racial constituencies. That means each candidate will have to try and convince voters in the other race categories to vote for them rather than for their “affinity.”

That’s why Giannoulias, the Daddy Warbucks of the election, is touting his friendship with former President Barack Obama, and playing basketball with young kids. Forget about the moral judgments here, Giannoulias is clearly pandering to African American voters.

Valencia has White’s endorsement, which is a big deal since White has been one of Illinois’ most successful African American office holders, although many believe his office had flaws, like poor service and employees who were difficult to work with. He is also very sensitive to criticism, some might say thinned-skinned for a public officeholder whose office is paid for by the taxpayers, you and me.

Moore just has some ideas, but no money to get them out.

But what are all the important issues in this race for Illinois Secretary of State? No one really knows because the issues are not the focus of the public debate. In fact, I don’t know if there will be a debate.

Giannoulias has run two big campaign commercials so far with kids playing basketball. But here we are, eight weeks from the election, and Daddy Warbucks hasn’t once said in any of those commercials what he plans to do about all the problems that have plagued the Secretary of State’s offices.

Three Republicans are running led by State Rep. Dan Brady, another very decent guy, who has represented the 105th District since 2013. Two other Republicans are in the race, too, John Milhiser and Michelle Turney. I have never heard of them before.

None of the candidates have said anything about how they will address the Secretary of State’s problems. Skyrocketing costs have plagued the office for years. Long delays when you go to the SoS to get a license or anything.

One of those problems is the unresponsiveness of Jesse White’s staff and the delays in the office and the costs.

I remember standing in line for hours while one of White’s employees talked on the phone with a friend while working at the public “Window.” I wrote about that and White has never forgiven me.

Many officials can’t take criticism. They pretend to be accountable.

The Secretary of State’s Office is so important. And costly to taxpayers. Prices have doubled and even tripled  in some cases, but no one wants to talk about that. What will the new SoS do to hold down costs, or make its 4,000 employees in 21 departments accountable?

One of White’s best ideas was to create satellite offices at local governments to help provide services to residents. Orland Park Mayor Keith Pekau, a political extremist who sole focus is on himself not on the taxpayers, kicked the office out of Village Hall fudging the reasons hoping to blur it all. White simply moved the important office to Orland Township and Supervisor Paul O’Grady embraced it, one of the most important services that benefits all taxpayers.

Is that going to change with the new secretary of state?

Those are the issues I’d like to know more about from the candidates. I think taxpayers also want to hear about all that, too.

In a race where race is the most important factor, however, no one needs to speak to the real issues. They can pander to their racial constituencies or target the ones they need the most.

That’s too bad. Because I have a feeling that when this race is over, it’s going to cost the public even more than it does now to register our vehicles, get new license plates, driver’s licenses and keep state records, laws, and archives.

Voters are getting so little for an office that is so big.

That should be the focus of the candidate’s in this election. But, it’s not.