Orland Park Mayor Keith Pekau tried to distract voters from the community’s rising crime rate by citing a real estate website which asserted that Orland Park was one of the “safest cities” in Illinois. But a recent survey by Safewise, which is considered more reliable, shows that Orland Park continues to have problems with crime. Orland Hills and Palos Hills are actually among the best on the list of Southwest Suburban communities. Orland Park ranks only 150th of the 265 communities in the state putting it the lower one-third of the state when it comes to safety.

Orland Park Mayor Keith Pekau touted assertions that Orland Park was ranked as one of the Illinois’ “Safest Cities,” citing a real estate website, but more reliable sources show that the Southwest Suburban village which has been plagued with car jackings, violence, robberies and attacks ranks far below.

Safewise, one of the most reliable online sites that measures safety in 265 of the state’s cities, reported this week that in fact Orland Park only ranks at 150, which puts it in the lower half of the safety mark, far below the top 20 that was touted during the last election which was fraught with political campaign exaggerations and untruths from the administration.

Pekau managed to eek out a win, winning re-election by only 307 votes showing that the village is still undecided about his leadership but were not favorable to challenger and former Mayor Dan McLaughlin’s return. Pekau inundated residents’ cell phones with annoying robocalls and repeated and unwanted spam text messages about how he needed support, a sign that he was very desperate as the election neared.

Despite the rising crime in Orland Park, and the manipulation of the numbers, Pekau and his team asserted that everything was “great” and that crime was on the “downslide.”

The real data from Safewise shows that of the 265 communities in Illinois, in the Southwest suburbs, Orland Hills ranks as 6th on the top 10 list of safest cities. Orland Park ranks 150. Of course, Orland Hills only has about 7000 residents while Orland Park has nearly 60,000.

Most residents in Orland Park knew the mayor’s assertions were driven more by politics than reality. And the lie was just enough to get him over the hump to plague the region for four more years.

Under McLauglin, who lost the election by relying only on his political supporters and failing to reach out to a broader coalition, Orland Park was truly one of the safest communities in Illinois for nearly three decades. McLaughlin bolstered the Police Department, improved and expanded the community, widened LaGrange Road, and fueled the growth of the village’s business community, all things Pekau has failed to do and continues to fail to do.

Pekau’s biggest concern is that his first priority is himself. Pekau doesn’t believe he should be held accountable, claiming “People over Politics,” but really asserting “Pekau over People.”

Pekau spends a lot of his time attacking journalists and columnists, trying to silence them to make his sluggish record look better. It won’t. His personal attacks are a hallmark of his meandering assertions that fill his annoying and political eNewsletters.

Other Southwest suburban communities that ranked well on the list above Orland Park are:

Not sure if Mayor Pekau addressed this issue at his recent political fundraiser. Apparently only a small handful of people actually attended based on the photo the released. But then, why would he? 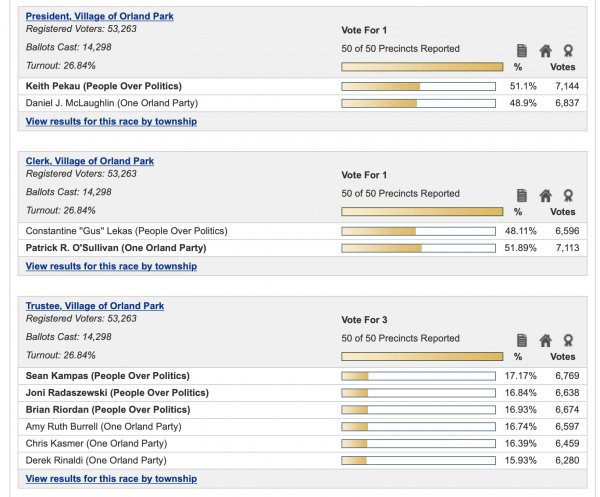