Jim Hickey is running for re-election for the Orland Fire Protection District Board of Trustees touting one of the best national records of any fire district in the country.

Hickey, who previously served as OFPD Board President, has worked to make the Fire District the best in the country.

“This didn’t come by accident,” Hickey said. “It is the result of a board of trustees that works together to make savings lives the Fire District’s number one priority. I am proud to be a part of that board.” 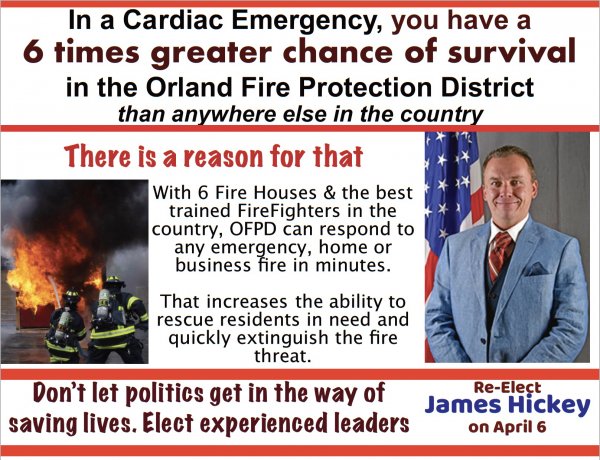 Hickey was first elected to serve a six-year term on the OFPD in 2009 as a trustee, and was elected as the board’s president in 2010. As the new president of the board, Hickey and the board cut the District’s budget by more than $2 million during the first year. Currently Hickey serves as a Trustee.

Born in Chicago, Illinois, he attended St Adrian Grammar School, St. Laurence High School, DePaul University (BA Liberal Arts), and graduated from Benedictine University with an MBA and concentrations in Finance & Accounting. He’s the director of business development (real estate) for Peace Village, a senior citizens community in Palos Park, but before that was a partner in a mortgage and real estate business. Hickey grew up on the Southwest Side of Chicago in St. Adrian Parish near 71st Street and Western Avenue “where my parents and grandparents had lived.

An attorney, Hickey has worked with the Board of Trustees to forge one of the most effective and professional Fire Districts in America in saving lives and in fighting fires.

“The focus of the OFPD has always been about providing the highest level of life-saving emergency services to the residents of the District, and to have the best trained firefighters to respond to every emergency from fire sin businesses and homes, to rescuing citizens in need,” Hickey said.

THESE ARE FACTS THAT SAVE LIVES

· Victims of Cardiac Arrest have a six times greater chance of survival in the Orland Fire Protection District than in any other region of the country. The national Save Rate average is only 10 percent. But in the Orland Fire Protection District, that Save Rate is over 65 percent. Since 2017, the OFPD has responded to 1,297 cardiac arrest calls, or an average of 324 per year, nearly one heart attack per day.

· With six Fire Houses and the best trained firefighters in the country, the Orland Fire Protection District can respond to any home or business fire in minutes not only increasing the ability to rescue residents who may be in need but also quickly extinguishing the fire threat.

· Data compiled by the OFPD shows that the district has a high emergency activity rate with an average of 10,000 emergency response calls annually, including for fires, rescues, medical service and explosions. There is an average of 186 general fires and 23 structure home/apartment fires annually during the past five years, nearly 7,000 emergency calls/rescues

· During the past five years, the budget has increased from 2016 to 2020 at a rate far below the inflation rate from $31.4 million to $36.1 million, excluding capital expenditures and Federal & State grant spending. The average annual increase has been 3.5 percent over the five-year period from 2016 through 2020.

· Additionally, the Fire District Pension Fund is 95 percent funded, the highest in Illinois and in the Midwest, reducing the tax burden on residents. As you know, many government entities have pension funds that are only 45 percent funded requiring higher taxes to cover pension obligations.

“The Priority of the Orland Fire Protection District board has not been politics. It has been focused on saving lives in some of the most dramatic emergency situations we can face,” Hickey said.

“I am proud of what we have done to maintain this level of service, making the Orland Fire Protection District one of the most effective in the country in fighting fires and saving lives. This achievement is a benefit to everyone including to our Senior Citizens who often times are in the most need.”

Additionally, the Fire District has helped coordinate COVID-19 services and assisted in administering vaccinations, hosted monthly meetings with the District’s Senior Citizens to inform them of services, provide training to citizens on CPR and other lifesaving techniques.

Is there a double standard when it comes to “corruption” Blogger