“On behalf of the city of Countryside and the Countryside City Council, we are deeply saddened by the loss of our friend and colleague Jim,” Mayor Sean McDermott said.

“He was a great guy, the epitome of a good alderman in that he responded to constituent concerns immediately, always did his homework for city council meetings and cared about helping people,” McDermott said.

Jasinski, 60, and wife Nancy were in Delaware, visiting their daughter Michelle and her family, when he collapsed and was rushed to a hospital, Ald. John Von Drasek (2nd Ward) said.

“Something happened at breakfast,” Von Drasek said Tuesday. “They took him to the hospital. They got him revived, but he went down again and he didn’t come back.”

A cause of death has not been determined, Von Drasek said. 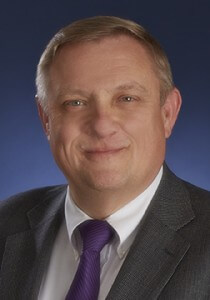 Countryside Ald. Jim Jasinski (First Ward) died suddenly on Monday. He had been on the city council since 2008. Supplied photo.

“I feel really bad,” Von Drasek said. “Jim’s just a good guy. He always had a nice angle of looking at things. He was never afraid to speak up, always there for his residents. Just a fun-loving guy.”

Jasinski started in city government on the city’s planning and zoning board of appeals in 2007.

Jasinski lived in Countryside since 1977 and was a graduate of the College of DuPage.

In 1994, he and his wife purchased a home in Countryside where they raised their daughter. They are parishioners of St. Cletus Roman Catholic Church in La Grange.

His career was in the travel industry, the city web site said, and he was working for Best Travel in Elk Grove Village. A message left there was not returned Tuesday.

“He was an avid Sox fan. We shared our affinity for White Sox baseball,” McDermott said.

Jasinski chaired the council’s special events committee. He was in charge of the summer concert series at Countryside Park, the St. Patrick’s Day Parade and a Christmas party for kids.

“An all-around great guy. A kind, decent human being. It’s a tragic loss for family and for Countryside,” McDermott said.

Von Drasek said it’s too early to speculate about who will fill the remaining two years of Jasinski’s term. “We don’t even want to think of that right now.”

Von Drasek and McDermott both praised Jasinki’s ability to listen and respond to residents.

For example, the day after a resident called about ice on the trail near Ideal School after the big snowstorm in February, city crews were removing the ice, McDermott said

“He was really good to his residents. They’re going to miss him,” Von Drasek added.

On Tuesday, many friends and residents posted their condolences on the Facebook page of Countryside United Party for Progress.

“Very saddened to hear this,” Valerie Chrysokos posted.” Shocking! I’m in total disbelief. A good man. Condolences to Nancy and the Jasinski family.”

Von Drasek fondly recalled how Jasinski “doted” over his granddaughter: “Man, that kid lost the most awesome grandpa. He’d talk about that granddaughter and just light up.”

An avid cyclist, Jasinski played a key role in getting the bike path built along Brainard Avenue from 55th Street to Joliet Road, McDermott said.

A moment of silence was held Tuesday night when the Township of Lyons board met. McDermott is the township highway commissioner.