Board members will not seek re-election

When voters cast ballots for the Lyons School District 103 board of education, they will not see three familiar names.

Longtime board members Sharon Anderson, Marge Hubacek and Shannon Johnson have decided to not seek re-election.

The three represent the board minority. And the three candidates who are running are aligned with the current majority.

That means there will likely be no dissenting votes for the next two years. In 2023, the four-member board majority will be up for re-election.

For Anderson it’s simply time for a break after 15 years on the board.

It was reported in the Riverside-Brookfield Landmark that Johnson plans on moving out of the district to be closer to her job teaching school in Glencoe. She and her husband welcomed a baby daughter in 2020.

Hubacek said she decided to not seek re-election because she is tired of the bickering that goes on at board meetings where  seldom is seen a unanimous vote.

Votes tend to go 4-3 with the majority having the four votes. 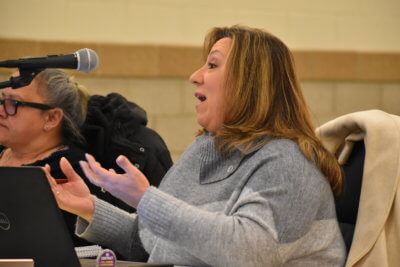 After 15 years on the Lyons School District 103 board, Sharon Anderson has decided to not seek re-election in April. Nor will Marge Hubacek and Shannon Johnson, two other members of the board minority.  Photo by Steve Metsch.

Contacted Dec. 29, Hubacek – a former president of the board – said it had become harder and harder to attend board meetings.

“Do you think I could sit through two more years of that?” Hubacek said. “I can’t. No. No. I’m done.

“They have their three candidates who are running, but no, no, I decided early on because it would be two more years of being (in) the minority on the board,” Hubacek said.

Board President Jorge Torres said he had heard the three may not seek re-election. The filing deadline was Dec. 21.

“The day came about for the deadline to file. (Then), to me, it was a reality. Now, I can believe it,” Torres said. “I did not believe it until that day.”

“It’s kind of wild,” Torres said.
The three candidates who are running for the board – and will be unopposed – are Sara Andreas, who is on the Lyons Public Library board; Slagjana Aleksikj, who has worked at the library; and Mario Ramirez.

Torres supports each candidate: “They are people we know. We asked them if they would volunteer for this type of work, and they agreed.”

“It will be a great mix of people,” Torres said.

Torres is up for another four-year term in 2023 along with fellow majority members Winifred Rodriguez, Vito Campanile and Olivia Quintero.

“Now, in two years, there’s four seats up,” Hubacek said. “That gives the people in the community two years to mount a good, solid campaign.”

Asked if she thought she and the other two minority may have won re-election had they tried, Hubacek said: “You know what? Maybe.”

In the end, though, she said “it’s not worth it,” adding “it certainly will be a change” not being on the board.

Asked if she will run in 2023, Hubacek said, “I don’t know about that, but I’m willing to help whoever wants to come back.”

Anderson, 54, was appointed to the board and then won three straight four-year terms.

Torres said any conflict “was just disagreements,” adding the entire board celebrated the birth of Johnson’s daughter.;

“It’s just disagreements. They’re a little more intense than we are,” Torres said.

Regarding the 2023 election, Anderson said, “you never know what can happen in two years.”

Looking back, Anderson said:  “I’ve made some really good friends, and I think staff, over the years, came to know I was there not only for the kids but them as well. So, I think that was an accomplishment.”

Expansions of Costello School and George Washington Middle School, improved test grades, computers for students and air-conditioning for the schools are among the highlights, Anderson said.

In a side note, Hubacek remains not happy with the sound quality of board meetings that the public can only attend on-line because of the pandemic.

“I was remote and muted three times,” Hubacek said. “They don’t do anything about it. There’s got to be a way to fix that.”

National Night Out a success News