The village of Lyons faces a deficit after the pandemic hit revenues hard, but trustees have passed a balanced budget for 2021. And finance department officials think the village can weather the storm.

The village will have a $240,000 deficit with a fund balance of just over $2 million, Assistant Finance Director Christina Bishop told the village board at its Dec. 15 meeting.

“This deficit was largely driven by the pandemic and actually could’ve been much worse,” Bishop said.

Sales tax and gaming taxes were down. And the village did not receive anticipated income from Cemex, a cement company that changed its mind and did not locate on the former quarry land beside the village hall.

Looking at the 2021 budget, department heads were asked to tighten their spending, which they agreed to, and some fees were hiked like ambulance costs for non-residents.

“The result of this process is a balanced yet realistic budget.” Bishop said 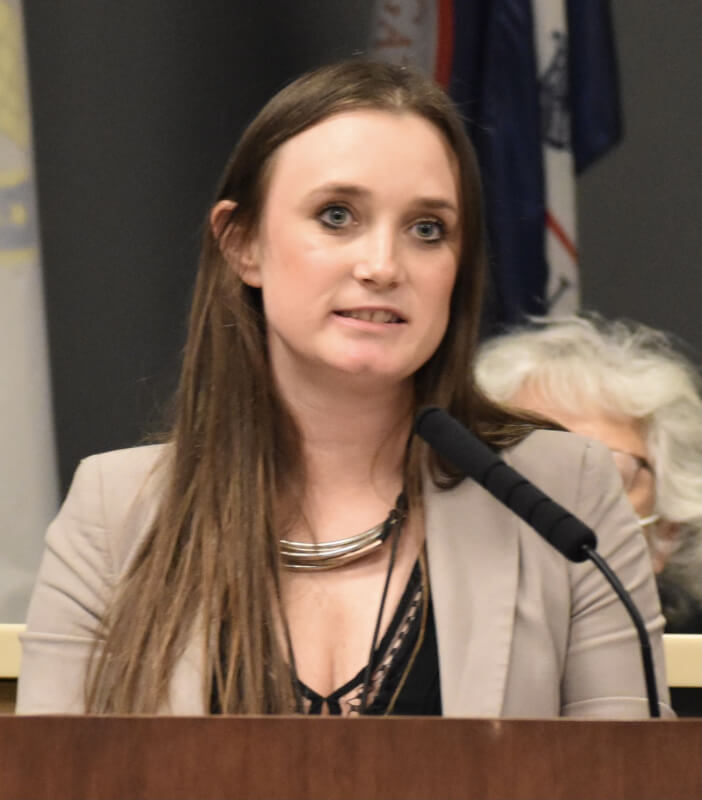 Lyons Assistant Finance Director Christina Bishopsaid the pandemic had a financial impact on the village, but it could have been worse. Photo by Steve Metsch

“This did a great job of increasing accountability throughout the whole process,” she said.

Finance Director Dan Denys said a $240,000 deficit “is not too bad, given what’s going on.” He noted that the village has nearly $2 million in reserve.

“I thought it was going to be a lot worse but things haven’t impacted us as much as we thought,” Denys said.

“Pretty much, when it’s all said and done, that’s what’s causing the deficit,” Denys said. “But we do have the resources to cover the losses.”

The 2021 budget has expected revenue of $11 million with expenditures of $9 million.

The biggest revenue source is a variety of taxes expected to bring in $8.7 million. Of that, $1.5 million is expected from sales tax.

The biggest expenditures are police ($3.2 million), fire ($1.5 million), and administration ($1.9 million). Most of that spending is for salaries and insurance.

Getty said he was pleased with the finance department. “We’re very happy with the outcome. …It’s a well-balanced budget, but we had to look outside the box and to address different items that didn’t’ negatively impact our residents.”

Non-resident ambulance fees, for example, are rising by $295. Contractor license fees are also going to be increased.

Losing the Cemex revenue was a “live and learn” experience, Getty said, referring to budgeting for anticipated revenue before a business is actually up and running.