Democrat Tammy Wendt sworn in to Board of Review

Tammy Wendt was sworn in as the new commissioner for the Cook County Board of Review for the First (1st) District during ceremonies on Monday, Dec. 7, 2020.

Wendt was sworn-in to her new office by Cook County Judge Pat Coghlan.

Here are Tammy’s remarks following the swearing-in ceremony at the Cook County Board.

“I am truly humbled and honored to be elected commissioner of the cook county board of review.

“I first want to thank Judge Pat Coghlan for swearing me in as Commissioner of the Board of Review.  I know you are busy in court today and I appreciate your time.  It really means a lot to me to have such an esteemed Judge do the honor of swearing me into office, especially one that I have known for many years and having had the pleasure of working with as an assistant State’s Attorney.

“Thank you to all of you out there who are virtually in attendance today to watch this ceremony.

“Thank you to Dan Patlak, my predecessor, who has given 10 years of service to district 1 and the taxpayers of Cook County.

“Thank you to my loyal constituents, the residents and voters of Cook County who believed in me and had faith in my candidacy. I promise you, just as I did in my campaign, that I will always do my very best to ensure fairness and to be your voice at the BOR. I am here for the betterment of Cook County and I am excited to start this journey by diving in with both feet. 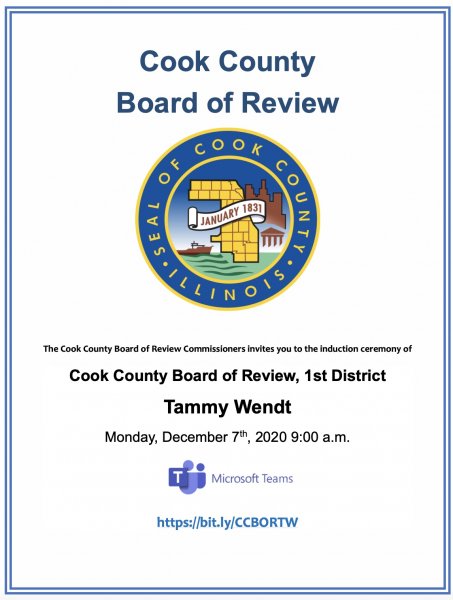 “And in the words of one of our greatest presidents, Abraham Lincoln,

” ‘ These men ask for just the same thing, fairness, and fairness only. This, so far as in my power, they, and all others, shall have.’

“I look forward to working with fellow Commissioners Larry Rogers and Mike Cabonargi and hope to learn much from their many years of experience.

“Gentlemen, I might be adding a women’s touch to the BOR. Maybe some bling, sparkles, idk, we’ll see.

“Finally, thank you to the Secretary of the BOR, Jim Thompson and our IT team and Chris Belz who worked very hard to made today possible in our virtual world.

“Thank you all again, and I hope that someday soon, we can all meet in person and I can extend my gratitude face to face.