Opinion: Are Census funds to improve count or politics?

Illinois Gov. J.B. Pritzker has allocated $20 million for the Census count in Illinois, monies additional to funds allocated by the U.S. Census. But how much of that money is going to count the most undercounted constituency in Illinois and Cook County, the Arab American community? Originally published in the Southwest News Newspaper Group

Are Census Funds and the Census about counting people? Or, is it really all about politics and money? Lots of money.

The government is boasting they are spending hundreds of millions of their hard-earned taxpayer dollars to ensure that everyone is “counted” through the 2020 Census.

In Illinois, Gov. J.B. Pritzker announced granting $20 million to some 50 organizations to help ensure everyone in the state is counted. (See press release below.) 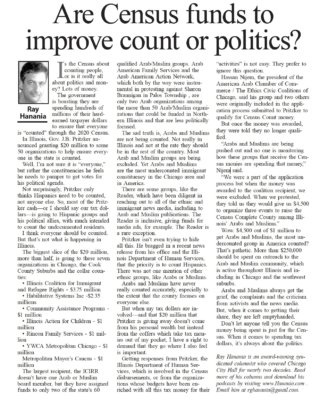 Well, I’m not sure it is “everyone,” but rather the constituencies he feels he needs to pamper to get votes for his political agenda.

Not surprisingly, Pritzker only thinks Hispanics need to be counted, not anyone else. So, most of the Pritzker cash – or I should say our tax dollars — is going to Hispanic groups and his political allies, with much intended to count the undocumented residents.

I think everyone should be counted. But that’s not what is happening in Illinois.

The biggest slice of the $20 million, more than half, is going to these seven organizations in Chicago, the Cook County Suburbs and the collar counties:

The largest recipient, the ICIRR doesn’t have one Arab or Muslim board member, but they have assigned funds to only two of the state’s 60 qualified Arab/Muslim groups. Arab American Family Services and the Arab American Action Network, which both by the way were instrumental in protesting against Sharon Brannigan in Palos Township. They are only two Arab organizations among the more than 50 Arab/Muslim organizations that could be funded in Northern Illinois and that are less politically focused.

The sad truth is, Arabs and Muslims are not being counted. Not really in Illinois and not at the rate they should be in the rest of the country. Most Arab and Muslim groups are being excluded. Yet Arabs and Muslims are the most undercounted immigrant constituency in America and especially in suburban Cook County and Chicago. The biggest undercounted constituency is in the 3rd Congressional District, which has one of the largest and Palestinian, Christian and Muslim, constituencies of any congressional district.

There are some groups, like the Reader, which have been diligent in reaching out to all of the ethnic and immigrant news media, including to Arab and Muslim publications. The Reader is inclusive, giving funds for media Ads, for example. The Reader is a rare exception.

Pritzker isn’t even trying to hide all this. He bragged in a recent press release from his office and the Illinois Department of Human Services, that the priority is to count Hispanics. There was not one mention of other ethnic groups, like Arabs or Muslims.

Arabs and Muslims have never really been counted accurately, especially to the extent that the county focuses on everyone else. There are more than 50 Arab American groups, Muslim Mosques and Christian Arab Churches that should be a part of this Census Count drive but are not.

When my tax dollars are involved – and that $20 million that Pritzker is giving away doesn’t come from his personal wealth but instead from the coffers which take tax monies out of my pocket, I have a right to demand that they go where I also feel is important.

Getting responses from Pritzker, the Illinois Department of Human Services (IDHS) which is involved in the Census disbursements, or from some of the groups whose budgets have been enriched with all this tax money for their “activities” is not easy. They prefer to ignore this question. I’ve asked. They haven’t answered.

Hassan Nijem, the president of the American Arab Chamber of Commerce / The Ethics Civic Coalitions of Chicago, said his group and two others were originally included in the application process submitted to Pritzker to qualify for Census Count money.

But once the money was awarded, they were told they no longer qualified.

“Arabs and Muslims are being pushed out and no one is monitoring how these groups that receive the Census monies are spending that money,” Nijem said.

“We were a part of the application process but when the money was awarded to the coalition recipient, we were excluded. When we protested, they told us they would give us $4,500 to organize three events to raise the Census Complete County among Illinois’ Arabs and Muslims.”

Wow. $4,500 out of $1 million to get Arabs and Muslims, the most undercounted group in America counted? That’s pathetic. More than $250,000 should be spend on outreach to the Arab and Muslim community which is active throughout Illinois including in Chicago and the Southwest suburbs.

Arabs and Muslims always get the grief, the complaints and the criticism from activists and the news media. But, when it comes to getting their share, they are left emptyhanded.

Don’t let anyone tell you the Census money being spent is just for the Census. When it comes to spending tax dollars, it’s always about the politics.

Here is Pritzker’s press release through the Illinois Department of Human Services:

SPRINGFIELD/CHICAGO – Governor JB Pritzker and the Illinois Department of Human Services (IDHS) announced the 30 local community and government organizations across the state that will receive a combined $20 million to maximize Illinois’ success in the 2020 Census. The grants are the largest Census investment made by any state in 2019.

“My message to Illinoisans is that the Census is one of the best ways for your voice to be heard. My administration is committed to ensuring an accurate Census count so that Illinoisans get both the representation and funding for critical services that they deserve,” said Governor JB Pritzker. “These regional hubs are the first step and they will help maximize grassroots outreach and education through collaborations and other funding opportunities with local organizations in diverse regions across the state.”

The Regional Intermediaries chosen for the 2020 Census include:

Note: The Northwest region of Illinois, which includes Jo Daviess, Carroll, Whiteside, Lee, LaSalle, Bureau, Putnam, Henry, Mercer and Rock Island Counties, was not awarded a competitive grant in this round due to the lack of an applicant that met the necessary criteria. A new Notice of Funding Opportunity (NOFO) is also being released today to ensure every area in Illinois is fully included in the Census 2020 program. Please visit census.illinois.gov for more information on how to apply for the Northwest region NOFO.

“We’re grateful that Governor Pritzker and state legislators dedicated significant resources to the 2020 Census,” said IDHS Secretary Grace B. Hou. “At our agency we touch the lives of some of the most vulnerable residents in Illinois. We need their voices to be heard and represented in government. We also need to ensure we receive enough federal funding to support them and help them get through what can be some of the most difficult times in their lives.”

In August, IDHS released a NOFO that adhered to all Grant Accountability and Transparency Act (GATA) requirements, which exist to protect taxpayers by ensuring accountability and fairness in government grantmaking. The NOFO process encourages feedback and participation from community partners, stakeholders, legislators, and members of the Census Advisory Panel.

Illinois’ final Census count is consequential. An undercount of residents could diminish the state’s proportional share of federal funding for critical services and programs. The number of seats Illinois has in the U.S. House of Representatives for the next 10 years will also be determined by the Census count in 2020.

Learn more about the 2020 Census in Illinois and find a map of the Illinois regions at www.census.illinois.gov.