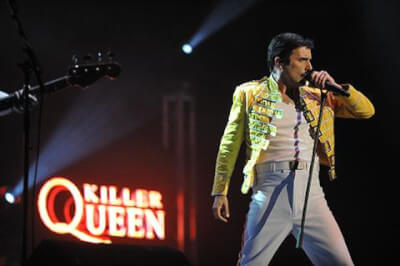 Aurora, Il., June 5, 2019 – If you want to go back in time to see what a Queen concert with Freddie Mercury looked and sounded like, then you want to get tickets to Killer Queen, the premier Queen tribute featuring Patrick Myers as Freddie Mercury, Saturday, April 3, 2020, 8 p.m., at Paramount Theatre, 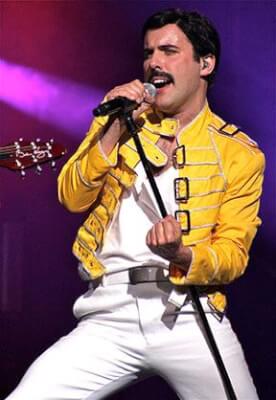 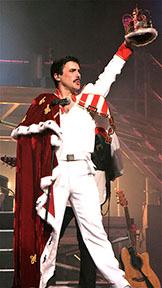 “Simply uncanny,” said the Daily Mail. “Kings of the musical impersonators,” hailed BBC-1. “A real life Bohemian Rhapsody…as near to the real thing as you’re likely to get,” raved The People.

With more than 25 years performing, Killer Queen is as thrilling, daring and electrifying as Freddie Mercury himself. They’re the only Queen tribute band who have sold out the same venues that Queen played. They have toured all over Europe and in the U.S. at Austin City Limits and Red Rocks Amphitheatre. No detail is overlooked.

Killer Queen formed in June 1993. Their first shows were at London University, following in the footsteps of the real Queen who had played their first shows there 21 years earlier. By 1995, Killer Queen’s U.K. popularity had grown to such an extent they secured a residency in London’s Strand Theatre attracting nationwide BBC coverage – the first tribute to have a show in the West End. Their reputation continued to grow both in the U.K. and abroad. As Killer Queen toured into their second decade, the audiences grew. In 2005 they played Ahoy Stadium, where the reformed Queen would be performing only a few months later.

The next year Killer Queen joined forces with Bjorn Again and The Bootleg Beatles for a Waverley Stadium show in Edinburgh. That show led to the band being selected to represent Queen in a re-staged tribute LiveAid concert held by Sir Bob Geldof. In 2016 they set their sights on America including Red Rocks Arena in Colorado, now a regular stop on Killer Queen’s tour sheet. 2019 sees the band’s fourth and biggest 10-week U.S. tour as well headlining across Europe, Scandinavia and Russia.

Lead singer Patrick Myers said, “It’s been an amazing journey. That first show back in June 1993 changed my life. We thought our band would last maybe a summer at the most but it’s a very addictive thing performing these songs! The concerts grew and grew and we’ve ended up playing and selling out the same arenas that Queen played at their peak. It’s been quite a surreal ride.” 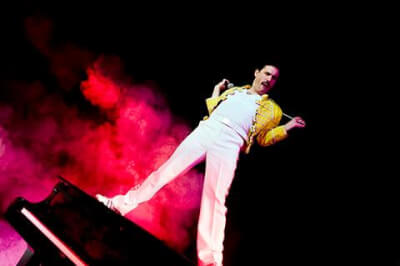 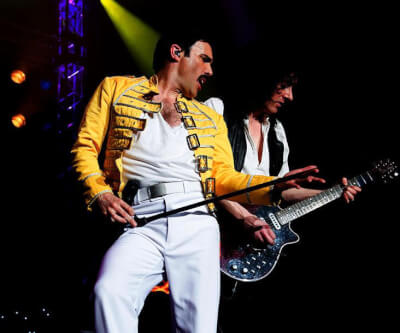 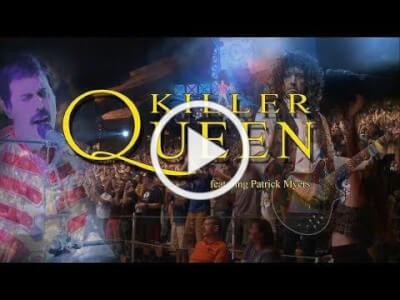 Other shows already on sale at Paramount include: 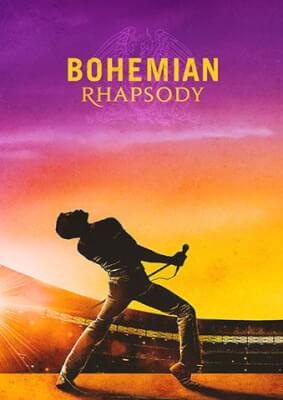 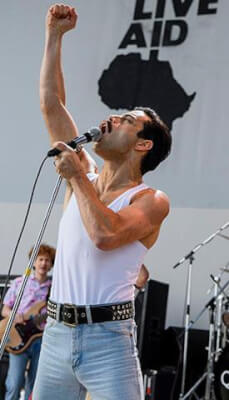 One of the biggest films of 2018 is coming to Paramount’s giant two-story movie screen, and this time, you get to sing along. 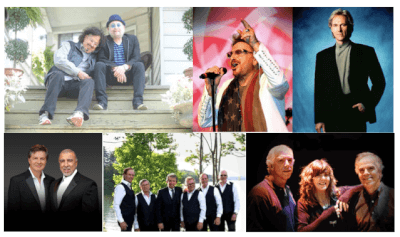 An annual end-of-summer tradition at Paramount, this year featuring six headline artists responsible for many of the biggest hits of the ‘60s and ‘70s: The Turtles, Chuck Negron (formerly of Three Dog Night), Gary Puckett & The Union Gap, The Buckinghams, The Classics IV and The Cowsills. 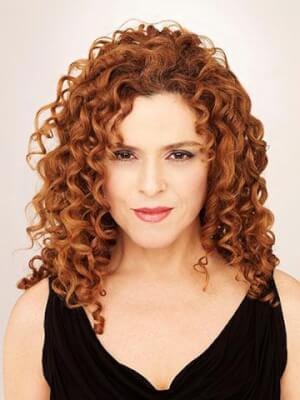 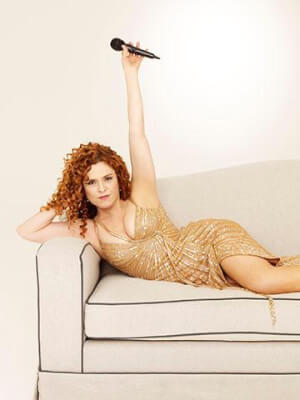 Throughout her illustrious career, Peters has dazzled audiences and critics on stage, film and television, in concert, and on recordings. Best known for her work on stage, Peters recently starred in the hit Broadway musical Hello, Dolly! Here’s your chance to see this vivacious mega-star perform live on Paramount’s stage.

Fastlove: A Tribute to George Michael 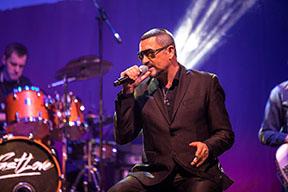 The U.K.’s finest George Michael tribute show is packed with crowd-pleasing anthems from Wham classics to the chart-topping success of the 80s album Faith, plus the awesome tunes of the 90s. Fastlove stars Andrew Browning, one of Europe’s leading and most accurate sound and lookalike to George Michael. 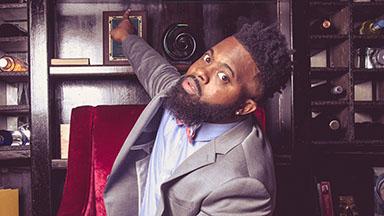 America’s favorite teacher/stand-up comic is changing the comedy game, tapping into the minds of everyone who’s ever stepped foot inside a school and selling out major arenas throughout the country. 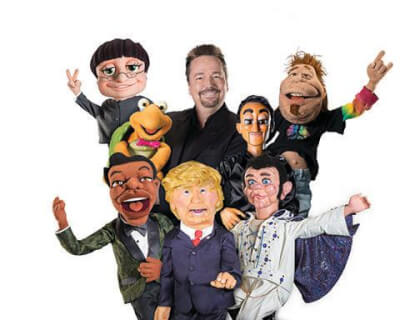 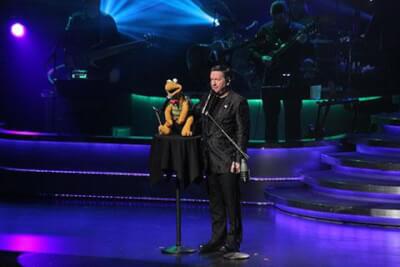 Celebrity impressions, singing, comedy and ventriloquism, America’s Got Talentseason two winner Terry Fator does it all with the help of his hilarious puppet pals Winston, the Impersonating Turtle, Maynard Thompkins, the Elvis Impersonator and many others. 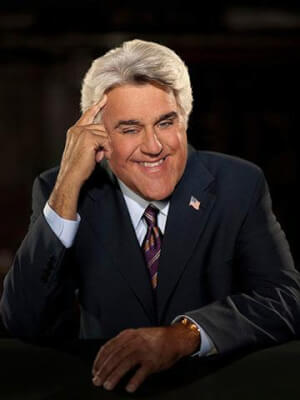 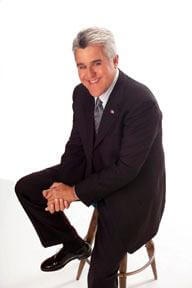 For more than two decades, Jay Leno was America’s favorite late-night comedy host, dominating the airwaves, winning an Emmy and a slew of other awards, including a star on the Hollywood Walk of Fame. Known as “the hardest working man in show business,” Leno is synonymous with quality entertainment. 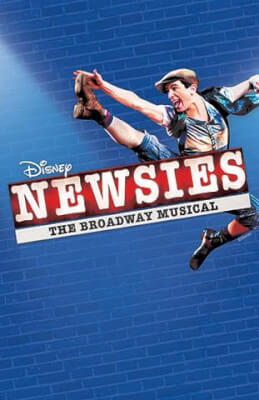 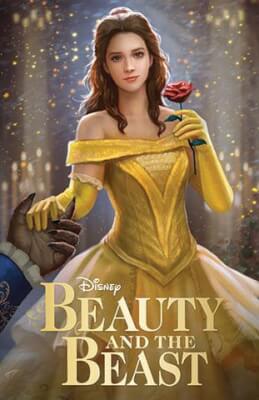 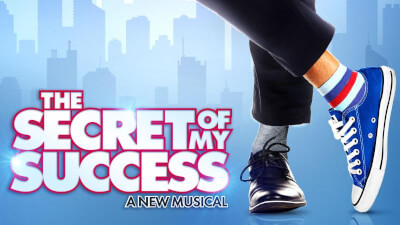 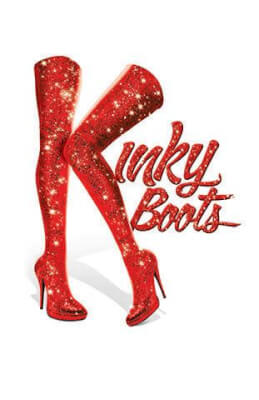