Instead, they voted into office the Parents for Student Excellence slate led by incumbent, Jorge Torres.

Torres, a village employee, and three newcomers were endorsed by Getty, who has often said his goal of improving the schools will improve property values and the village as a whole.

According to the Cook County Clerk’s unofficial results with 16 of 16 precincts reporting, Getty’s slate rolled to victory.

They easily defeated the PSF slate led by Joanne Schaeffer, whose four decades on the board ended with her getting 1,092 votes.

Asked to comment, Magsaysay said “no, not right now” as she left Slager’s On 47th, in Brookfield, site of her party’s post-election gathering that quickly turned from hopeful to somber. 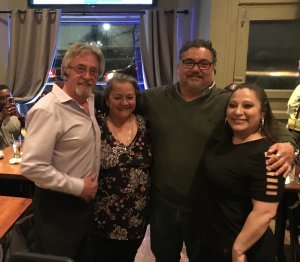 It was quite the opposite atmosphere at Irish Times, in Brookfield where dozens of people crammed into a party room.

An ecstatic Getty climbed atop the raised hearth in front of a fireplace around 9 p.m. to address the troops, the many village employees and volunteers who pounded the pavement and knocked on doors to get the vote out.

He noted the win came two years after a bitter defeat when his slate of candidates was voted out.

Roars of approval rang out as Getty announced Tuesday’s vote totals for each.

“It takes a lot to be a candidate, to say ‘I’m going to run.’ These four individuals deserve a lot of credit,” Getty said.

Torres, who’s spent the past two years of his four-year term often at loggerheads with the majority, beamed with pride.

“People learned that old practices have to come to an end. Our community was tired of the bad handling of our schools. People expressed their concerns in voting for us. We’re going to change the schools. We’re going to hold everyone accountable,” Torres said.

Torres thought last year’s hiring of a teacher charged with attempted murder “was one of the turning points, along with miscommunication, wasteful spending and mishandling of all the problems.”

He was critical of the board majority for failing to renew the contract of Robinson Principal Al Molina, after 20 years. Asked if Molina can get his job back, Torres said, “I don’t know.”

Quintero was all smiles: “I feel wonderful. I am thankful for everybody who supported us. We couldn’t have done it without them.”

Rodriguez is “excited,” and said she heard from many residents “mad about the thing with the teacher and not being able to speak at board meetings.”

Campanile smiled and said, “this is the beginning of a new era … we’ll make a solid foundation of the five communities we represent.”

“Now, it’s time to make our children proud of us, to get a harmonious board working in a positive direction,” Campanile said.

Taking a break from the celebration, Getty said we “had an organized effort to ultimately bring our schools to a higher standard.”

“Schools are the biggest factor in property values. We’ve had struggling schools for many years. I put a lot on the line to support candidates to bring about change and I’m very happy with the decisive victory. We need good schools,” Getty said.

“I feel bad not for myself, but for the kids and the taxpayers. They can’t afford these politicians,” she said.

“It’s over for our district because of the way they’ll be spending money. I guarantee, in five years they’ll have to do a referendum,” Schaeffer said.

She will still attend board meetings, but in the audience.

“Jorge will be president, but Chris and Ken will be running the school board, pulling the strings, because Jorge or Olivia or Rodriguez or Vito have no clue to how a school board runs,” Schaeffer said. 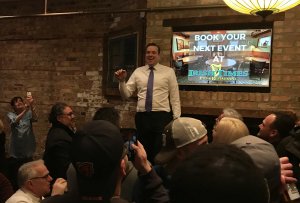 A happy Lyons Mayor Christopher Getty announces vote totals to the troops Tuesday night after his slate swept the four contested seats on the school board. Photo by Steve Metsch.

Mayor Getty said he will “have little say in what happens in the schools, but I am concerned on improving test scores no matter who’s on the school board.”

Getty added: “People who I helped elect are going to listen to me more closely than some people who should’ve been off the board 20 years ago.”

Current board president Marge Hubacek, not up for re-election, shrugged and said “it’s not what we expected, but what are you gonna do?”’

“The people have voted. They decided they like politics in their schools. They got what they voted for. Move on. Stay tuned,” Hubacek said.

She expects Torres will be the new board president.

“As long as I stay on the board, my approach will be to do what’s best for the kids and not become a habitual ‘no’ vote,” Hubacek said.

Board members Sharon Anderson and Shannon Johnson, also of the former majority, are skeptical about the new majority’s intentions.

She had been principal of Home School when the old majority appointed her to the HR job in May 2018. “So, she saw it coming,” Getty said.

Lyons Village Trustee Dan Hilker called the school board “a piece of the puzzle.”

“We could pave the streets with gold. Nobody’s going to move into Lyons unless the schools are better,” Hilker said.

At the Lyons Village Hall, two precincts both had more than 80 voters. The tiny 2ndprecinct, which covers Riverside Lawn, had one.

“But we had two early voters,” judge Will Moriarity said.

Turnout was light at Lincoln Elementary School in Brookfield.

Al Ermitage took a day off from his job in the Lyons Building Department to be an election judge for the 12th year.

Ermitage kept a running tally. Only four people voted in the first two hours. By 5 p.m., 53 had voted in the precinct. How did he fill idle hours? “We’ve been talking about the White Sox.”

As one woman was leaving Lincoln around 5:30 p.m., Schaeffer and supporters of Getty’s slate thanked her for voting.

“This is very intimidating, everybody attacking you. That’s why people don’t like to vote,” the woman said.