Five candidates remain on the ballot for April

The five people whose candidacies for the Moraine Valley Community College board were challenged, are staying on the ballot.

The college’s three-person electoral board on Friday, Jan. 18, ruled that the signatures on their petitions were legitimate and the panel found no reason for the candidates to be removed from the ballot.

MVCC board trustee Eileen O’Sullivan, who is on the panel, said it was a unanimous decision.

“Personally, I’m very happy about that because I think the voters should decide who is on the board,” O’Sullivan said Monday.

“As a trustee, I’m a little surprised (by the challenges),” O’Sullivan said. 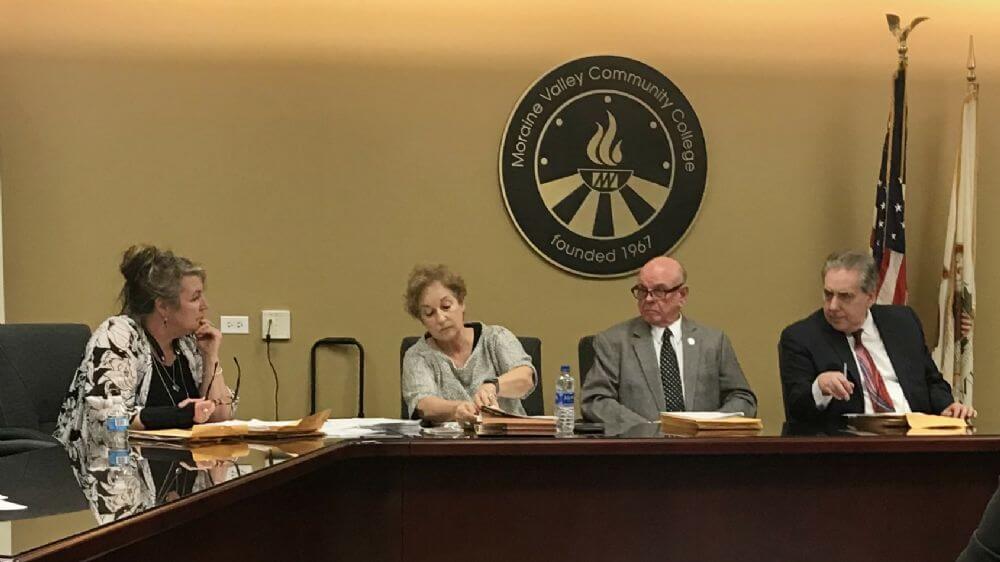 The MVCC panel of trustee Eileen O’Sullivan (left), John Coleman and Gil Grossi ruled to deny a challenge that five candidates names be removed from the April ballot. Board attorney Judy Kolman is second from left. (Photo by Steve Metsch)

The challenges were made by Craig Schmidt, a former employee of the Village of Orland Hills. He also was the notary for three candidates who were not challenged.

“Now Craig Schmidt, whoever he is, can appeal this to the circuit court. If he’s not happy with their decision, he can appeal it to the appellate court. Who is that going to cost again? The taxpayers,” O’Sullivan said.

“I feel like this is exploitation of the system. That’s what frustrates me as a six-year board member,” said O’Sullivan, who is not seeking re-election in April.

Incumbents Joe Murphy and Sandra Wagner are among the five who were challenged and will remain on the ballot. Also staying on the ballot are Linda Ehlers, Brendan Houlihan and Shadin Maali.

Ehlers said Monday that she was happy her name would remain on the ballot.

“It’s been pretty wild. Who knew there was so much politics for a local, unpaid position? I can’t imagine how much money (Craig Schmidt) paid to do this. It’s crazy,” Ehlers said

O’Sullivan wondered: “What was the point of challenging them? How are they a threat to the school?”

Murphy thinks it was a political move by Schmidt’s former boss, Orland Hills Mayor Kyle Hastings, to gain control of the board. Hastings’ daughter and his assistant village manager are already on the college board.

Hastings has denied any involvement in the challenges.

Murphy, an 18-year incumbent seeking another six-year term, is also pleased the challenge was denied.

“The claim our petitions were incomplete is not how the hearing board interprets it,” Murphy said.

Schmidt also claimed 50 to 60 percent of the signatures on Murphy’s petitions were not genuine. That was proven incorrect by a “binder check” conducted by the Cook County Clerk’s office, Murphy said.

“I’d like to know what research, evidence or proof did Mr. Schmidt have to make such a claim,” Murphy said.

Murphy was impressed by Gil Grossi, a retired judge, who served on the panel, saying he was “extremely eloquent and thoughtful.”