Governor-elect J.B. Pritzker also announced plans to give his top cabinet members a 15 percent raise, and is rumored to be preparing to demand resignations of all appointees on state-held boards and commissions

Today, the Pritzker-Stratton Inaugural Committee announced the schedule of weekend events leading up to the inauguration on Monday, January 14.

Governor-elect JB Pritzker and Lieutenant Governor-elect Juliana Stratton are kicking off their inaugural weekend with a day of service on Saturday, January 12. They will attend more than half of the 13 service opportunities in every corner of the state coordinated by the inaugural committee.

Illinoisans can join the day of service at the following locations:

RSVP to an inaugural community service event at www.ilinauguration19.com/serviceday. 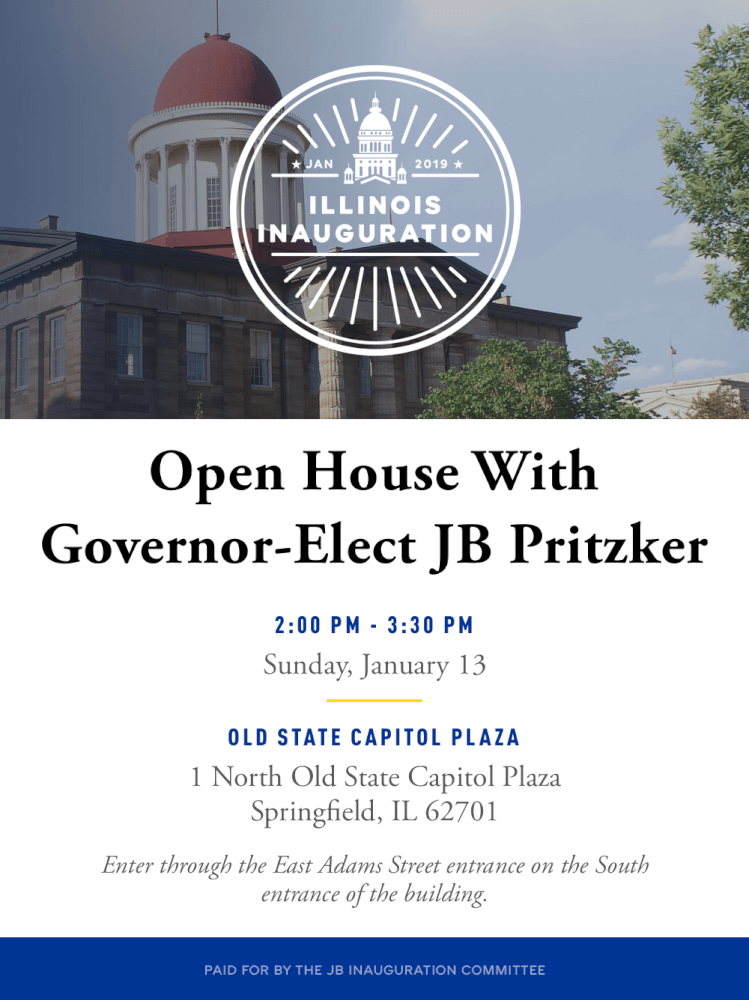 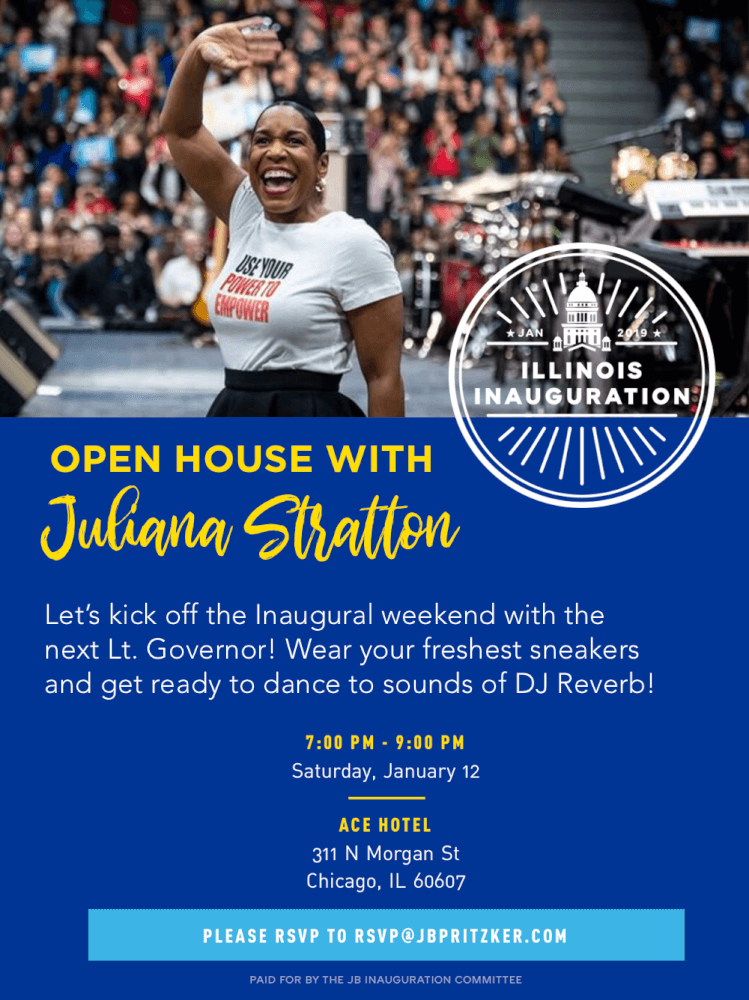 These events round out inaugural weekend, which includes the swearing-in ceremony and celebration. Tickets for the inaugural celebration are available here. Media advisories with complete event details will be sent out later this week.

For more information about the inauguration, visit www.ilinauguration19.com.

On Thursday, December 27, 2018, Governor-elect JB Pritzker and Lieutenant Governor-elect Juliana Stratton made the following personnel announcements for their incoming administration:

Ann Spillane will serve as General Counsel in the Office of the Governor. Spillane has served as chief of staff for Attorney General Lisa Madigan since her election in January 2003. In the role, she oversaw an office of more than 750 employees, including over 385 attorneys, and an annual budget of more than $80 million. Previously, Spillane served as a senior staff attorney at the Environmental Law and Policy Center and partner at Sachnoff & Weaver. She also clerked for the United States District Court for the Central District of Illinois and the U.S. Court of Appeals for the 10th Circuit. She received her Juris Doctor and Bachelor of Arts in political science from the University of Illinois at Urbana-Champaign.

David Harris will serve as Director of the Illinois Department of Revenue (IDOR).Harris is a retiring member of the Illinois House of Representatives where he served as the Republican spokesperson for the Appropriations-General Service and Revenue & Finance committees. He has held his House seat since 2011 and previously served the same chamber from 1983 to 1993. Harris also served as Senior Vice President of the Illinois Hospital Association, Adjutant General for the State of Illinois, and Deputy Director and Chief of Staff of the U.S. State Department’s Iraq Reconstruction Management Office (IRMO) where he oversaw $18.4 billion in Congressional funds. Harris is a Life Member of the Association of the US Army, the Military Officers Association of America, the National Guard Association of the US, and the Illinois National Guard Association. He received his Bachelor of Arts from Georgetown University, and his professional military education includes the U.S. Army’s Command and General Staff College in residence, Military Police Officer courses, and training and leadership seminars at the U.S. Army War College.

John Sullivan will serve as Director of the Illinois Department of Agriculture (IDOA). Sullivan served as state senator of the 47th district from 2003 to 2016 and as chair of the Senate’s Agriculture and Conservation committee. During his tenure in the Senate, Sullivan was a strong advocate for the state’s vital agricultural industry and pioneered new agricultural and renewable fuel programs. He also championed legislation to create jobs, improve industry and infrastructure, and grow the economy. Before elected office, Sullivan managed his family-owned auction business that specialized in farm real estate and machinery. A Rushville resident, he received his Bachelor of Arts in history from Quincy College, now Quincy University.

Sean Rapelyea will serve as Deputy Chief of Staff for External Affairs in the Office of the Governor. Rapelyea currently serves as deputy transition director and previously as political director for JB for Governor. Prior, he served as Illinois Political Director for the Hillary for America campaign during the general election, where she garnered a 17–point win margin. Rapelyea previously served as Deputy Director of Government Affairs for the Office of the Mayor in Chicago after working as a Regional Field Director and Advisor to Mayor Rahm Emanuel’s 2011 and 2015 re-election campaigns. In 2010, he worked on Arkansas Senator’s Blanche Lincoln’s primary, runoff, and general election campaign. He received his Bachelor of Arts in English literature from Washington College.

On Thursday, December 20, 2018, Governor-elect JB Pritzker and Lieutenant Governor-elect Juliana Stratton made the following personnel announcements for their incoming administration:

Dan Hynes will serve as Deputy Governor. Hynes currently serves as a senior adviser to the transition committee and as a senior executive at UBS Asset Management in Chicago, following a distinguished 12-year career in public service as the Comptroller for the State of Illinois. Hynes was elected Comptroller in 1998 as the youngest state constitutional officer since World War II. He was re-elected in 2002 and 2006 by wide margins. In 2011, President Barack Obama named Hynes as the United States Observer to the International Fund for Ireland, which makes investments in Northern Ireland for the purpose of promoting peace and stability in the region. Hynes also serves as a member of the Democratic National Committee. He received his Juris Doctor from the Loyola University School of Law and Bachelor of Arts in Economics from the University of Notre Dame.

Christian Mitchell will serve as Deputy Governor. Mitchell currently serves as a senior adviser to the transition committee, state representative of the 26th District, and executive director of the Democratic Party of Illinois. Mitchell began his career as a community organizer on the south side of Chicago before entering politics. He served as a deputy field director on Attorney General Lisa Madigan’s re-election campaign and was Midwest Paid Media and Polling Director for President Obama’s re-election campaign in 2012. He has consulted for state assembly, city council, and congressional races across the country and was a senior adviser to U.S. Senator Tammy Duckworth’s successful 2016 race. Before being elected to office, Mitchell also served on the senior staff for Cook County Board President Toni Preckwinkle. He received his Bachelor of Arts in Public Policy Analysis from the University of Chicago and is pursuing a Juris Doctor from the Loyola University School of Law.

Nikki Budzinski will serve as Senior Adviser. Budzinski currently serves as transition director and previously served as senior adviser to the JB Pritzker for Governor campaign. Budzinski led JB Pritzker’s exploratory effort for Governor and advised the campaign on political strategy, messaging, and outreach. From 2015 to 2016, she served as the labor campaign director on Hillary Clinton’s 2016 presidential campaign. Previously, Budzinski worked in the labor movement for ten years in Washington, D.C., working for the Laborers International Union of North America, International Association of Fire Fighters, and United Food and Commercial Workers Unions. From 1999 to 2004, Budzinski served numerous roles in the Office of the Comptroller in Springfield. Budzinski is a Peoria native and received her Bachelor of Arts from the University of Illinois at Urbana-Champaign.

Alexis Sturm will serve as Director of the Governor’s Office of Management and Budget (GOMB). Sturm has over 20 years of experience in Springfield working on state fiscal policy, debt management, and administration. She currently serves as the director of cash management and bond reporting for Comptroller Susana A. Mendoza. Sturm previously served in the administrations of three Republican governors and Comptroller Judy Baar Topinka. From 2015 to 2017, she served as chief of staff and deputy director for debt, capital, and revenue in Gov. Rauner’s GOMB. From 2004 to 2015, Sturm served as director of research and fiscal reporting and senior fiscal advisor for Comptrollers Hynes, Topinka and Munger. Under three governors’ administrations from 1997 to 2004, she worked in senior roles in debt management, revenue and economic analysis after beginning her state government career as a Dunn Fellow in 1997. She grew up in Carbondale, received her Bachelor of Arts in Economics from Miami University and a Master of Arts in Economics from Washington University in St. Louis.

Erin Guthrie will serve as Director of the Illinois Department of Commerce & Economic Opportunity (DCEO). Guthrie currently serves as the regional general manager for Uber Midwest in Chicago where she partners with cities and regulators to create safe, positive experiences for customers and residents. From 2013 to 2017, she was a client engagement manager and partnership portfolio manager at McKinsey and Company in Chicago. Previously, Guthrie worked as a product manager (MBA intern) at Amazon’s Seattle headquarters, as an account executive at 4INFO and as a business development manager at Nokia in San Francisco. She received her MBA from the University of Michigan Stephen M. Ross School of Business and Bachelor of Arts in Public Policy from Stanford University. Erin lives in Wicker Park with her husband and son.

Additional personnel announcements will be made on a rolling basis.