The Lyons Township boys basketball team had a memorable run in the 45thAnnual Jack Tosh Holiday Classic at York High School, nearly playing for the championship.

After losing an overtime semifinal game on Dec. 29, they played in the third-place game on Dec. 31, losing 78-61 to St. Laurence.

As a result, the Lions finished fourth in the 32-team tournament in Elmhurst.

The Lions looked great early, racing to an 11-0 lead, and holding St. Laurence scoreless until 4:08 remained in the first quarter. 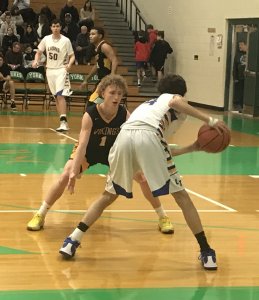 After that, however, it was all St. Laurence, which outscored Lyons 44-26 in the second half. Nolan Niego led Lyons with 17 points. Tyrese Shines added 15.

On Dec. 29, Nolan Niego poured in 25 points, but it wasn’t enough as the Lions suffered a 59-55 overtime loss to Downers Grove South in the semifinal.

The sharp-shooting senior scored a 4-point play, nailing a three-point shot and the following free throw, to tie the score late in the game. Lyons Township, however, ran out of gas in overtime.

That put the Lions into the third-place game Dec. 31 vs. St. Laurence.

Those wins put Lyons into a wild quarterfinal game Dec. 28 against a tough Riverside-Brookfield team.

But Lyons caught fire in the third quarter, and grabbed a 47-39 lead en route to a 70-62 victory. Shines closed the scoring with a breakaway slam dunk.

Balanced scoring was the key as Grant Niego and Shines both scored 19 points, and Nolan Niego chipped in 14.

Nolan Niego and Shines were both named to the all-tournament team.

The tournament’s MVP was York forward Sam Walsh, who led the Dukes to the championship. York beat Downers Grove South 55-52 in the title game on Dec. 31.