The Bridgeview Village Board was thinking beneath the surface at its latest meeting.

The board approved a contract that will review its sanitary sewer system for illegal hookups.

The board also okayed an agreement that will allow Advocate Christ Medical Center security officers to use the firing range located beneath the police department.

“We were going to rehab that firing range. Did we complete that project?” Trustee James Cecott asked during the Oct. 3 meeting. ”The lighting needs improvement and it needs soundproofing.”

The range has not been rehabbed, Police Chief Ricardo Mancha said.

“Think about what you want to do to that place and maybe we can spruce it up a bit,” Cecott said to Mancha during the meeting.

Mancha is aware of the need and plans to come up with suggested improvements soon.

“There’s no need to rush into it I don’t think they’re standing at the front door with their guns ready to go use the place,” Cecott said. 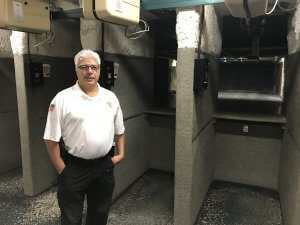 Bridgeview Police Chief Ricardo Mancha in the firing range beneath the station. The range may get some improvements. Photo by Steve Metsch.

Several suburban police departments and agencies rent out the firing range, Trustee Norma Pinion said. Funds from those agreements could eventually be used to improve the range, she said.

Advocate, for example, will pay Bridgeview $1,200 a year to use the firing range for one year.

“We were going to improve the lighting and put better sound proofing in there, and check to make sure everything is in good order. It was put on hold because we were in the process of hiring a new chief,” Cecott said.

In other business, the board unanimously approved a contract that will result in the entire village’s sewer system being inspected for illegal hookups.

“The MWRD is demanding that all suburbs, cities and villages go through their sewer system and check and see how functional it is,” Cecott said.

“We talk about this all the time at mayors’ meetings that I attend. It’s been going on for two or three years,” Cecott told the board.

“We’ve gone to Robinson Engineering, and their estimate was $144,712 to do what’s required.”

Two bids were submitted for the work that uses a small camera that is sent through the sewer system.

National Power Rodding bid $130,704. Visu-Sewer of Illinois was the low bidder at $106,746 and was awarded the contract by unanimous vote of the board.

The MWRD requests that municipalities inspect their sewer systems because of flooding concerns, Cecott said. Illegal hookups that may send in water for sump pumps could overload the sanitary sewer system.

“There are so many people cheating, putting storm water in with the sewage. That’ a no-no and the MWRD wants to get rid of that,” Cecott said.

It’s also important, he said, for homeowners to know if the line from their home is “going right down that pipe or if it’s hitting a broken pipe out in the street and its contaminating that whole area.”

“You’ve got to cooperate to keep things going. It’s either that or turn off your water,” Cecott said.
With October being Breast Cancer Awareness Month, Trustee Pat Higginson urged women to get mammograms.

“Men as well as women should check, because men get breast cancer, too,” said Higginson, a breast cancer survivor. She will often be seen in October wearing pink, the color of Breast Cancer Awareness Month, she said.

“This year the theme is ‘Look, Listen and Learn.’ Be aware that fire can happen. The fire department urges testing your smoke detectors monthly and to have an escape plan (in your home) in case of a fire,” Higginson said.

Joseph Mazarka was appointed by the board to fill an open position on the Bridgeview Personnel Board.

“The personnel board picks people to fill positions in the village. Fire. Police. They read all the resumes, things like that,” Cecott said.

Mazurka has served on the park district board for several years, Cecott said.

There were no public comments during the meeting. The board next meets at 7 p.m. this Wednesday, Oct. 17,

Give the Gift of Holiday Safety: Drive Sober or Get Pulled Over Crime
Forest View woman missing News
Blues hit it big in Lyons News