You know it’s your night when your punter, sensing an imminent blocked kick, scampers 57 yards untouched for a touchdown.

With Nazareth leading 28-7 early in the third quarter Friday night, Michael Love was set to punt from his 43-yard line.

Noticing Joliet had stacked the line, he did not punt. Love instead ran down the right sideline for a 35-7 lead to sew up the victory.

The heads-up play did not surprise Nazareth Coach Tim Racki.

“It was going to be blocked. They brought everybody. I told him, ‘Just tell the press I made that call’,” Racki said with a smile. “He’s a smart football player. And he just went.”

“You want to start getting momentum going into the playoffs. That’s why it was good to get humbled last week (a 34-13 loss Oct. 5 to Marist) so we can get re-focused. You either get better or you get worse,” Racki said.

Nazareth got much better.

Just ask Derrick Strongs, Jr. The senior running back had first-quarter touchdown runs of 4 and 39 yards to give Nazareth a 14-0 lead.

“I enjoyed it. I liked it a lot,” said Strongs, who carried five times for 61 yards.

Stongs smiled and shook his head when asked about Love’s punt-turned-touchdown: “Amazing. I don’t think anyone touched him.”

“We responded well from last week, we came back and got stronger. Practice was a lot better,” Strongs said. ”We were locked in all week.”

Quarterback J.J. McCarthy was certainly locked in. The sophomore sensation was 13-for-14 for 190 yards and two touchdowns. He nearly had a third, but Colin Cox made an acrobatic interception in front of Love at the goal-line.

Joliet Catholic Coach Jake Jaworski said McCarthy “is a heck of a player, one of the best I’ve seen in 13 years of coaching.” 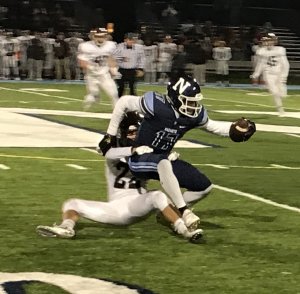 McCarthy threw a 34-yard scoring pass to Love with 1:23 left in the first half and added a 6-yard TD toss to Diamond Evans moments later for a 28-7 halftime cushion.

Last seen on crutches with an ice pack on his right knee after an injury against Marist, Evans caught five passes for 64 yards. “The knee is okay,” he said.

“Mike Love did his job by turning the cornerback out, and the safety followed. Nothing to worry about,” said Evans, who showed great concentration catching the touchdown pass after it was deflected.

Nazareth outgained Joliet Catholic 448 yards to 236, according to stats from Nazareth. Dylan Smith and Alex Carrillo each scored touchdown in the third quarter.

“We’re not taking our foot off the pedal,” Evans said.

Joliet Catholic did make it interesting.

Facing 4th-and-8 at Nazareth’s 16 and a ferocious pass rush, quarterback Jordan Alvarez scrambled and evaded two sacks. He then found Kurt Weis in the end-zone to cut the lead to 14-7 with 4:29 left in the first half.

Jaworski was frustrated by how his team could not maintain the momentum.

“The first bit of adversity, our eyes get big. You can’t give good teams opportunities and extra possessions,” Jaworski said after the Hilltoppers committed five turnovers. 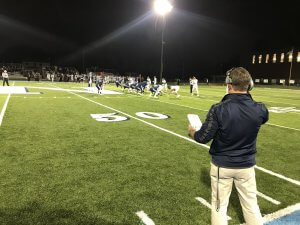 Nazareth Head Coach Tim Racki said the team must cut down on its penalties when it enter the playoffs. Photo by Steve Metsch.

Racki was pleased with the win, but, like all football coaches, dislikes the color yellow. Nazareth was flagged for eight penalties.

“Turnovers are going to happen. All the penalties drive me crazy. You don’t want that going into the playoffs. We’ve got to clean that up,” Racki said.

Nearly every congressman, candidate has taken money from AIPAC Blogger
Toyota Park: Through the years News