On the 17thanniversary of the terrorist attacks of 9-11, about 30 people gathered outside the Summit Fire House on 59thStreet Tuesday morning.

The American and POW-MIA flags were lowered to half-staff.

A wreath was placed at the base of the flagpole by Cindy Motzny and Charles Fries, associate advisors of Boy Scout Venture Crew 2035.

Various speakers shared recollections and memories of that awful day. 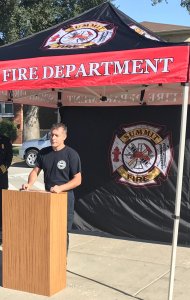 Summer Fire Lieutenant Paul Bojan asked for people to focus on healing during a 9-11 memorial service. Photo by Steve Metsch.

But Summit Fire Lieutenant Paul Bojan left the morning’s biggest impact with his impassioned plea for those attending to “use today to heal.”

“On Sept. 11, we focus on the death and the people we lost. The media, the things we see on TV feed a lot of anger. It’s easy to be angry,” Bojan said.

“It wasn’t a nation that did it. It was a group of people. Challenge yourself on a day like this (to think about that), instead of focusing on the anger and the negativity,” Bojan said.

A 20-year veteran of the Summit Fire Department, Bojan asked those attending to remember “there’s no one race of people on this planet that’s bad. There’s just groups of people that have bad ideas and carry them out.”

Fire Chief Wayne Hanson recalled the confusion of Sept.  11, 2001, when reports first from New York City about the twin towers being struck by airplanes.

“This was a day that changed our world forever. It changed our daily lives, what we believe in, how we travel. Many innocent people were injured or killed that day,” Hanson said.

“Millions of Americans would die a little bit that day as well,” Hanson added.

Police Chief John Kosmowski said “we should say to ourselves, ‘We will never forget this day’.”

Village Trustee Sam Dardovski, who 17 years ago thought the initial reports were “like some sort of Orson Welles movie,” thanked those who attended Tuesday.

He and Village Executive Director Jerry Hurckes thanked the police and fire departments for their service.

Micah Windle, pastor of Summit Bible Church, in his opening prayer asked that we remember the dead.

In closing, he prayed for the first responders “who stepped forward in spite of their fear.”

“I ask that we remember this. Our hearts turn toward the people who allowed hatred and fear to be ruling factors in their lives. I pray that you move in their hearts and minds. And. that we are moved in forgiveness as well,” Windle said.

“I can see not forgiving the group that did it, but it’s not the race. It’s easy to point a finger,” he added.