Team is 0-3, and loses starting QB

Lyons Township’s football team finds itself in an unenviable situation.

The Lions are winless in three games after being blanked 28-0 at home Sept. 7 by York. And, starting quarterback J.J. Dutton is out with a broken wrist on his throwing hand.

“We’re a family and we need to pull together. We all have a hand in getting our butts kicked. We need to improve as coaches, as players, as a football team,” Head Coach Kurt Weinberg said.

Losing Dutton is a huge setback. He fell on his right wrist and broke it during practice last week, Weinberg said. 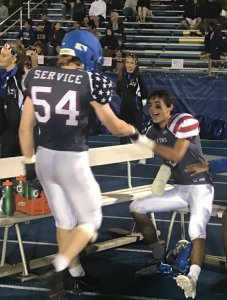 Lyons defensive back J.J. Dutton is congratulated by Adam Suknovich after a fourth-quarter interception. All the players wore “Service” on their uniforms for “Salute to Service” game. Photo by Steve Metsch.

“J.J. was someone we centered our attack around, and now he’s out. It is what it is. But at least he’s not out completely. He was our defensive MVP last year. There’s a reason for that,” Weinberg said.

Dutton is able to play defensive back, and somehow snared a fourth-quarter interception with one hand.

Quarterback duties are now in the hands of juniors Blaise Reichert and Colin Pasko. Reichert was 6-for-18 for 71 yards and one interception. He lost 49 yards on 11 runs. Pasko was 0-for-1 with one pick. Pasko lost 9 yards on two carries.

Numerous snaps were either high or bobbled. “Some were not on target, but some were on hands. You’ve got to catch those,” Weinberg said.

The ineffective aerial attack confined Lyons’ offense to runs by senior running back Tyrone Smith. A senior-laden York defense keyed on Smith, holding him to 22 yards on 14 carries.

How bleak was the offense?

Lyons gained 71 yards passing and lost 71 yards rushing. Toss in 20 yards on penalties and the total offense was negative 20 yards, according to stats provided by Lyons.

“They definitely whupped us,” Weinberg said.

Head Coach Mike Fitzgerald said the Dukes “have a chip on their shoulder” after last year’s 1-8 campaign.

“These guys are out to prove themselves. The kids are aggressive. I’m extremely proud of them,” he said. 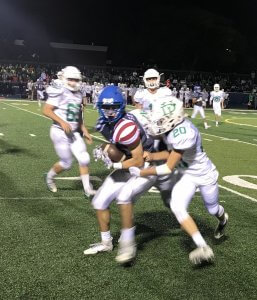 Junior Chris Clarke hauls in one of his team-high three receptions for Lyons Township. Photo by Steve Metsch

One bright spot for Lyons was the play of junior Chris Clarke, who boomed several punts deep into York territory. But his best punt was an amazing, athletic effort that had the crowd buzzing.

Trailing 7-0 late in the first quarter, Clarke stepped back to punt from Lyons’ 30. The snap sailed over his head. He recovered the ball inside the 5, avoided a horde of hungry Dukes, and kicked a line drive from about the 2-yard line that skipped and rolled to York’s 29-yard line.

“Chris is a heck of a player. He’s got a lot of upside. He’s got some athleticism. He’s tough. Not afraid. He’s a very good player. He’s smart, savvy. We’re excited about Chris’ future,” Weinberg said.

While Lyons struggled passing, York racked up 290 yards with three touchdown passes, two by backup Dan Dunn and one by starter Joe Javorek.

Dunn closed the scoring with a 39-yard bomb to Josiah Scott.

Fitzgerald smiled when asked if there’s a quarterback controversy.

“They both are tremendous kids. The flow of the game dictates (who plays). It’s a good situation to be in,” he said.