It’s doubtful the Brookfield Ale House has ever been so packed at 4 p.m. on a Tuesday.

But it was standing room only Aug. 28 when J.B. Pritzker, the Democratic nominee for governor, paid a visit. The Lyons Township Democratic Organization hosted.

“We have our work cut out for us,” Pritzker said, after he entered to cheers, but noted he’s been endorsed by President Obama.

“He told me the future of the free world is at stake in 2018, and I do believe that is true. Not only do we have to take governorships all across the nation, but we have got to take back the U.S. House of Representatives,” Pritzker said.

Pritzker, who was a few minutes late, joked he was tardy because he drove himself. He was dressed comfortably in slacks and an open-neck dress shirt  for the Brookfield bar, 8900 Fairview Ave.

His message was well-received by a crowd that often roared its approval of Pritzker’s plans, and booed the mention of Rauner 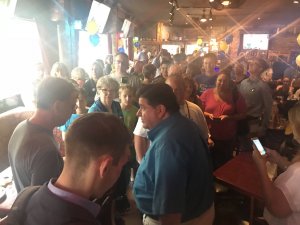 J.B. Pritzker was warmly received when he visited a tavern in Brookfield. Photo by Steve Metsch.

Rauner, Pritzker said, is working hard at destroying the public universities of Illinois so he can consolidate them. And once kids leave the state for college, “70 percent of them don’t come back to Illinois,” Pritzker said.

“We want to keep them here. They’re very much a part of our future,” said Pritzker, who hopes to help education and business.

“We want a thousand flowers to bloom. All the big businesses started as small businesses,” he said.

Pritzker mentioned 1871, the small business incubator he founded. It has helped create 7,000 to 8,000 jobs and hundreds of companies, he said.

The crowd roared when Pritzker said he supported unions and opposes “right to work” legislation.

He reminded those attendin they had “70 days and two hours” before the polls close on Election Day. He asked for their help “making phone calls and knocking on doors.”

“Bruce Rauner has not run one positive (campaign) commercial. Why is that? He has nothing to brag about,” Pritzker said.

After speaking about 15 minutes, Pritzker spent 20 shaking hands and shooting the breeze. Dianne Duner, of Brookfield, squeezed through to have her photo taken with him.

Enrollment is down at many state universities, she said. She agreed with Pritzker that if students leave Illinois, “they stay where they went to school.”

“I loved it. It was refreshing,” Siegel said of Pritzker’s speech. “I love to see so many younger people here, too.”

Pritzker “is a better guy than he’s portrayed to be (by Rauner),” Patti Ernst said. “We’re going to work hard for the election.”

Her husband, John Ernst, missed the speech, but said Pritzker has his vote: “I’m a Yellow Dog Democrat. I’ll vote for any Democrat over any Republican.”

A union carpenter, he likes that Pritzker “stands strong with the unions and won’t be pushing for ‘Right to Work’.”

When he asked his wife what Rauner has accomplished as governor, Patti quickly replied: “Nothing. He can’t get anything done.”

Several Lyons Township officials and Village of Summit trustees attended, as did Illinois Treasurer Michael Frerichs. He stressed the importance of voting, noting he won by 9,225 votes in 2014, less than one vote per precinct statewide.