Standing on the stage, shoveling into his mouth the hottest peppers known to man, Jonathan Gilbert appeared ready to keel over or hurl a few times Sunday.

But the 6-foot-10 man from Chicago’s Portage Park neighborhood managed to persevere. He ate as many Carolina Reaper peppers as he could in one minute.

Then, he passed another test – going another minute without drinking liquid and without throwing up.

Gilbert left the stage to applause from those attending the first-ever Chi-Town Hot Sauce Expo held Saturday and Sunday at Toyota Park in Bridgeview.

His wife, Andrea, filming on her phone, shook her head, smiled and said, “he’s crazy” when asked about Jonathan’s attempt to break the world record of 120 grams eaten in one minute.

“He may be spending the night in the spare bedroom,” she said. 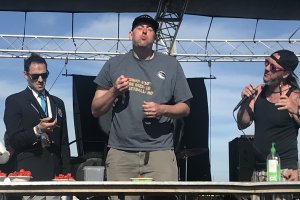 Jonathan Gilbert, of Chicago, said eating Carolina Peppers was “awful,” but he wants to compete again next year at the Chi-Town Hot Sauce Expo held at Toyota Park in Bridgeview A representative from the Guinness Book of World Records, left, times Gilbert as promoter Steve Seabury urges him on June 24. Photo by Steve Metsch.

On Monday, 24 hours after the contest, Gilbert said he felt fine.

“For two hours after, I felt like I was out of my own body. We went to Chinatown for dinner and once I ate some rice, I wasn’t feeling like I was going to ‘lose my businesses.’ It was awful, awful,” he said.

He entered the contest because he loves hot foods. In hindsight, he wished he had prepared better. Backstage, he noticed several contestants drinking milk, eating starchy foods or sipping Pepto-Bismol beforehand. But he loved the spotlight.

“It was exciting being up on stage, and having the world record pace for a half minute. I had a good run and I’d like to try it again next year,” Gilbert, 39, said.

When he coughed during the contest, pepper juice sprayed on his face and got into an eye, he said. But he was able to wash it out.

Gilbert, who works as a registered nurse, said he spit up and “had the dry heaves” in the first half-hour afterwards. But he said “everything burns, the shower, (going to ) the bathroom, everything.”

Steve Seabury, owner of High River Sauces, one of the expo’s presenters, was master of ceremonies for the pepper-eating contest that tried to set the Guinness World Record.

“These guys for the next 36 hours are going to experience more trauma and pain than they ever have in their lives. We had a woman in the contest in New York City. She said she’d rather give birth to quintuplets than ever do this again,” Seabury said.

About a dozen contestants, all male, tried their best to the cheers and jeers of several hundred spectators. One man wound up vomiting.

The standard jalepeno is about 1,000 Scoville Heat Units, he said. A Carolina Reaper is more than 2 million Scoville heat Units, Seabury said.

“Molten lava is about 1.5 million. These peppers are hotter than molten lava,” Seabury said.

The hot pepper eating contest was among several eating competitions held during the two-day expo. Some 40 hot sauce vendors from around the country were there, selling their wares and offering one and all samples on tiny plastic spoons. 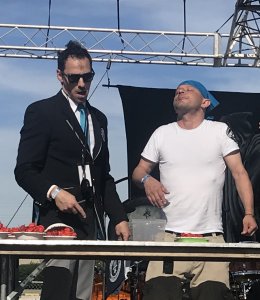 A contestant who later yelled “Yes, it’s hot” struggles to down Carolina Reaper peppers during the contest. Photo by Steve Metsch.

The brave, like Jake Wyderski, of Wilmington, went all in, sampling the “Angry Irishman Why?” hot sauce.

“It ain’t that bad. That’s good, good sauce. That’s a (deleted) good sauce,” said Wyderski , who bought a $10 bottle.
“The flavor was fantastic, right on point. The heat did not kill you. Some people have a high tolerance for hot sauce. Some don’t. There are sauces that make me wince. But this was flavorful and good. You can put this on anything and you’ll be happy,” Wyderski said.

It took him “seven years of trial and error” to perfect his first recipe. “We’ve had a very good response this weekend, and we’ll definitely come back.”

Rex Bacita , 36, of Chicago’s North Side, has been hooked on hot sauces since high school. He tested samples at booths.

“It’s like a drug,” he said. “Your mind almost gets addicted to it. It needs it.”

That’s where holsters come in handy.

A man who calls himself Canugator Steve owns Hot Sauce Holsters, based in Maryville, Tenn. He sold leather hot sauce bottle holsters, $30 for a five-once size, $20 for two-ounce.

The leather holsters, with a variety designs, can be attached with a belt loop or a swivel snap to a belt or bag. “You’ll never be without your hot sauce again,” he said. 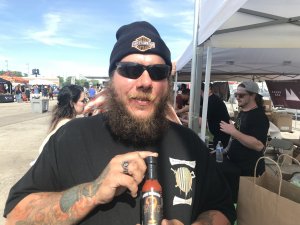 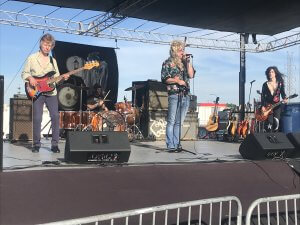 After the contest, Ed Currie, the man who developed the Carolina Reaper, tossed those not eaten to the crowd.

Eric Nuernbeg, of Palatine, refused to touch one: “I would never eat one. That’s ridiculous. But it was fun to watch.” His girlfriend, Lori Moss, gingerly held a stem between two fingers.

High River Sauces and FM Entertainment co-presented the expo, which Seabury said will return in 2019.

Frank Mastalerz, owner of FM Entertainment, said Monday: “I didn’t know what to expect because we had to create awareness from zero.”

“But it was fun. The people were having a great time. That’s half the satisfaction as a promoter, the gratification from seeing the people at our shows who are happy.”

He, ahem, did not sample a Carolina Reaper.

“A guy in our cleanup crew said one brushed up against his leg. He said his leg was burning for an hour,” Mastalerz added with a laugh.