“Nothin’ But A Good Time” tour is just that

After an entertaining nine-song set by Pop Evil, a fan wearing a “Hall & Oates 2018” T-shirt asked me – maybe it was my Cheap Trick T-shirt? – why the band from Rockford would open for Poison. The pairing, he said, seemed odd.

I told him it’s because Cheap Trick loves to perform and plays hundreds of shows year after year. They don’t care where they play or for whom they open. “I’m sure you’ll have a good time,” I said.

I didn’t see that fan later, but judging from the reaction from fans at Tinley Park’ s Hollywood Casino Amphitheatre, Cheap Trick and Poison sent them home happy Saturday night. 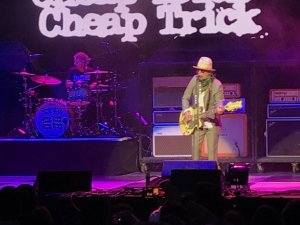 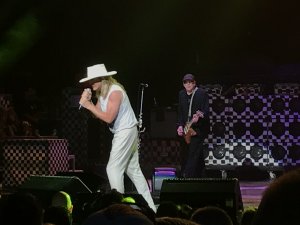 Midway through Cheap Trick’s 15-song set, lead guitarist Rick Nielsen cautioned “We only have an hour to play. It’s hard to pick songs.” But they chose wisely, blending songs they must play with newer songs and dusty tracks.

Their newest single, released two weeks ago, was the perfect fit for a pleasant June night. “The Summer Looks Good On You” is their typical  fun, punchy pop tune. Another newer song, “You Got It Going On,” is a solid rocker.

As mentioned, there are certain songs Cheap Trick must play: “I Want You to Want Me,” “Dream Police” and “Surrender.” All still sound fresh, and were well-received by the fans.

As usual, the band managed to dust of a few gems from the vast catalogue. They dug way back for “Lookout,” featuring a nice solo by Nielsen; and ripped through the double-entendres of “She’s Tight,” a fun song that saw Nielsen, lead singer Robin Zander and bassist Tom Petersson bouncing all over the stage.

For an unexplained reason, Zander’s son, Robin Taylor Zander, played guitar throughout the concert. He left the solos to Nielsen, 69, and sort of filled the gaps. Maybe it’s another family-friendly move by a band that finds Nielsen’s son, Daxx, on drums. Longtime fans still ask about original drummer Bun E. Carlos, but Daxx Nielsen does a fine job pounding out the backbeat with Petersson.

Petersson, 68, played his obligatory bass solo and sang lead for “I Know What I Want.” Zander, 65, continues to amaze with his singing. I’ve seen the band seven times since 2013, and each time walk away wondering how his voice sounds ageless. “It’s good to be home,” he said with a smile before “Dream Police.”

It was great hearing “Never Had a Lot to Lose,” one of those audience-participation songs in which Zander asked fans to sing along. Why wasn’t it a bigger hit? Rick Nielsen thanked fans for keeping “Long Time Coming,” from last year’s “We’re All Alright!” CD, atop the classic rock charts for “18 weeks nationally, 20 weeks in Chicago.” The solid rocker is worthy of being played each night.

Another band that is still in high gear is Poison, the night’s headliner.

Truth be told, I knew very little about Poison, other than a few of their hit songs. But after seeing them in person, I’d be happy to see them again. Front man Bret Michaels, 55, has the most energy this side of Mick Jagger. He’s all over the stage. His bandmates share his enthusiasm, often breaking into huge smiles. These guys were clearly having a blast.

Michaels made a point of often thanking fans for their support over the years. “We’ve had three generations of awesomeness. Thank you for being here,” he said after the band opened with sizzling takes on “Look What the Cat Dragged In” and “I Want Action.”

Bass player Bobby Dall looked a bit out of place in his flannel shirt that had me thinking he should be in a grunge band, but he set a steady backbeat all night long with drummer Rikki Rockett. Lead guitarist C.C. DeVille, just like Michaels, was having a great time bouncing around the stage and playing solid leads throughout the show.

There was a drum solo, a lead guitar solo AND a bass solo. Does that seem a bit cliche? Perhaps. But who cares? The band was having as much fun as the fans who were cheering all night long. If that’s what you do, do it right. No complaints here. 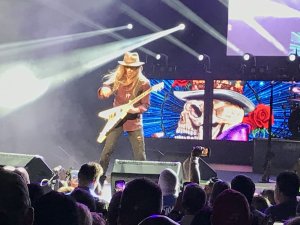 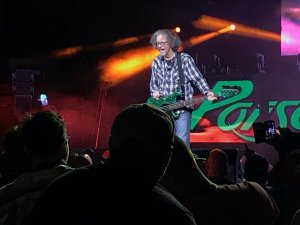 Highlights included the rollicking “Talk Dirty to Me,” which Michaels introduced as “the first song we did in Chicago.”  Another was their rocking version of Loggins & Messina’s “Your Mama Don’t Dance,” featuring Michaels on the harmonica. Both were a lot of fun.

A poignant moment was when Michaels invited on stage seven  men and one woman, whom he said served in the armed forces, as the band played a heartfelt rendition of  “Something to Believe In.” He said that he’s the son of a Navy veteran, adding “this is not about politics.” The eight people, he said, “are the real rock stars.”

It’s hard to top “Every Rose Has a Thorn” with Michaels strumming an acoustic guitar. “This is the first song you helped make No 1. Let’s sing it together,” he said. Poison closed with “Nothin’ But a Good Time” and it was.

The encore, a cover of KISS’ “Rock and Roll All Night,” featured Leigh Kakaty, lead singer of Pop Evil, singing with Michaels. It was a fitting finish to a rocking good time.

“Oh, What Fun” Festival of Trees is Back to Usher in the Holiday Season in the Quad Cities  Entertainment