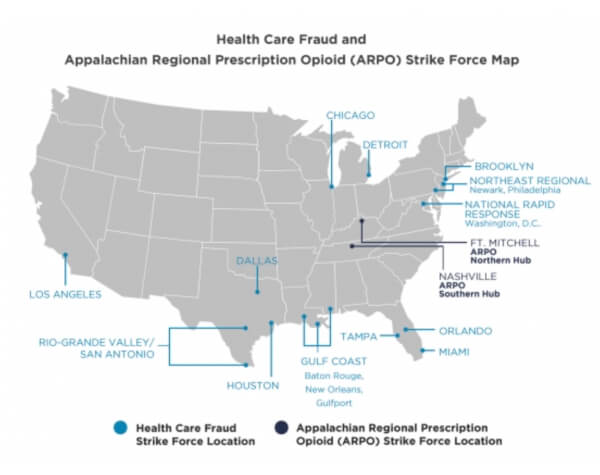 A federal jury in the Northern District of Illinois convicted a Chicago man yesterday for participating in a conspiracy to pay approximately $25 million in illegal kickbacks to generate business for his durable medical equipment pharmacy.

According to evidence presented at trial, Mark Sorensen, 53, worked at Symed, a Chicago pharmacy that paid illegal kickbacks to obtain patients to bill to Medicare, TRICARE, and the Department of Labor’s Office of Workers’ Compensation Programs (OWCP).

Between 2015 and 2018, Sorensen illegally bought patient leads from Bernie Perconti. Perconti obtained the leads from others, including Christine Anderson and Craig O’Neil. Without the involvement of the Symed, the conspirators could not have submitted claims to obtain reimbursement from Medicare or other federal health care benefit programs.

Perconti, O’Neil, and Anderson each pleaded guilty to conspiracy to pay and receive kickbacks in 2019, July 2020, and January 2021, respectively, and are scheduled to be sentenced at a later date.

Sorensen was convicted of one count of conspiracy and three counts of payment of illegal kickbacks. He faces a maximum penalty of five years in prison on each count of conviction. A federal district court judge will determine any sentence after considering the U.S. Sentencing Guidelines and other statutory factors.

The Fraud Section leads the Criminal Division’s efforts to combat health care fraud through the Health Care Fraud Strike Force Program. Since March 2007, this program, comprised of 15 strike forces operating in 24 federal districts, has charged more than 4,200 defendants who collectively have billed the Medicare program for more than $19 billion. In addition, the Centers for Medicare & Medicaid Services, working in conjunction with the Office of the Inspector General for the Department of Health and Human Services, are taking steps to hold providers accountable for their involvement in health care fraud schemes. More information can be found at https://www.justice.gov/criminal-fraud/health-care-fraud-unit.

The HCF Unit’s 80 prosecutors focus solely on prosecuting complex health care fraud matters and cases involving the illegal prescription, distribution, and diversion of opioids. The HCF Unit’s core mission is to protect the public fisc from fraud, waste, and abuse, and to detect, limit, and deter fraud and illegal prescription, distribution, and diversion offenses resulting in patient harm.

The HCF Unit has a recognized and successful Strike Force Model for effectively and efficiently prosecuting health care fraud and illegal prescription opioid cases across the United States. HCF Unit prosecutors currently operate in 15 Health Care Fraud and Appalachian Regional Prescription Opioid (ARPO) Strike Forces across the country, including the District of Columbia. The Strike Force Model centers on a cross-agency collaborative approach, bringing together the investigative and analytical resources of the Fraud Section, FBI, the U.S. Department of Health and Human Services Office of the Inspector General (HHS-OIG), the Centers for Medicare & Medicaid Services (CMS), Drug Enforcement Administration (DEA), Defense Criminal Investigative Service (DCIS), Federal Deposit Insurance Corporation Office of the Inspector General (FDIC-OIG), Internal Revenue Service (IRS), and other agencies, along with the prosecutorial resources of U.S. Attorneys’ Offices and state and local law enforcement partners. The HCF Unit is a leader in using advanced data analytics to identify aberrant billing levels and target suspicious billing patterns, as well as emerging schemes and schemes that are multi-jurisdictional.

The HCF Unit’s cases are increasingly complex, both in the individual Strike Force locations and the National Rapid Response Strike Force. Specifically, the National Rapid Response Strike Force was created in 2020 with a mission to investigate and prosecute fraud cases involving major health care providers that operate in multiple jurisdictions, including major regional health care providers operating in the Strike Force cities, with a focus on investigations and prosecutions of individuals and corporations. The National Rapid Response Strike Force coordinates with the Civil Division’s Fraud Section and Consumer Protection Branch, U.S. Attorney’s Offices across the country, state Medicaid Fraud Control Units, the FBI, HHS-OIG, and other agency partners in order to identify, investigate, and prosecute significant multi-jurisdictional and corporate health care fraud cases. Examples of the types of matters under this Strike Force’s purview include a large-scale rural hospitals billing fraud matter indicted in the Middle District of Florida; the global resolution with Tenet Healthcare Corporation and related individual prosecutions; the telemedicine fraud and Sober Homes initiatives; and prosecutions of those seeking to criminally exploit the COVID-19 pandemic through health care fraud and related financial fraud schemes. NRRSF chairs the interagency COVID-19 health care fraud working group and, on May 26, 2021, NRRSF led the National COVID-19 Fraud Takedown, in which 14 defendants in seven federal districts across the United States were charged for their participation in COVID-19 fraud schemes that resulted in over $143 million in false billings.

In October 2018, the Criminal Division announced the formation of the Appalachian Regional Prescription Opioid (ARPO) Strike Force, a joint effort between DOJ, FBI, HHS-OIG, DEA, and state and local law enforcement to combat health care fraud and the opioid epidemic in parts of the country that have been particularly harmed by addiction.  The ARPO Strike Force focuses upon prosecutions of medical professionals and others involved in the illegal prescription, diversion, and distribution of opioids, and has partnered with approximately 10 USAO Districts, divided into two main components – ARPO-North and ARPO-South. Since its inception in October 2018, the ARPO Strike Force, which operates in 10 districts, has charged more than 90 defendants who are collectively responsible for distributing more than 105 million pills.