Barry Goldwater was the spiritual founder of the Conservative  Republican movement in the 1960s. His son, Barry Goldwater Jr., will be in Orland Park this Friday, May 20 at 6 PM at Elements Banquet Hall, 16235 S. LaGrange Road in Orland Park. Register for the FREE event at OrlandForward.com. And, Orland Park Mayor Keith Pekau is falsely accusing everyone of personally and viciously attacking him and his friends, but in fact the only mudslinging is coming from him as he desperately tries to replace the Republican Party with a Political Cult that bows to his political idolatry.

The Republican Party in Illinois has been in disarray for the past few years, with a wide range of people pulling it in every direction.

But on May 20, mainstream Republicans who have the true spirit of the Conservative movement in their hearts will gather to solidify their voices to rally their candidates in an effort to reassert themselves in Illinois politics.

And it’s being done in a powerful way.

The Forum is co-hosted by Orland Township Republican Committeewoman Elizabeth “Liz” Gorman and her Homer Township colleague Steve Balich and will be held at Elements Banquet Hall, 16235 S. LaGrange Road in Orland Park.

There will be a lot of speakers but the big name keynote speaker that has everyone excited is former Congressman Barry M. Goldwater Jr., whose father, the late Arizona Senator and Presidential candidate Barry Goldwater was the conscience of the Conservative Movement.

I remember in the 1964 presidential election cherishing a campaign sign for Senator Goldwater that read “Au H2O in ’64” that I displayed in the window of my home. That was the first real election I remember growing up in a traditional conservative Republican family who also rallied for Senator Charles Percy.

I got a chance to speak recently with Goldwater, who served in Congress representing California from 1969 until 1983, and was reminded about what being a Real Conservative Republican is all about.

“I am excited about being out there in Illinois, although the State of Illinois has been hurt by the domination of the Liberal side of the political equation,” Goldwater told me in an interview this week.

“We got too much government in Illinois. We have a huge debt and an unfunded liability in pensions. The state is hurting because of the lack of good quality conservative leadership.”

Illinois ranks as the second worst state when it comes to taxes, and the Republican party has been teetering on the verge of losing its entire presence in Cook County, something that Liz Gorman is hoping to change. She is the leading Republican candidate running in the 17th Cook County District, and for re-election as Orland Township Republican Committee-person, in the June 28 GOP Primary election.

“I don’t like government telling me what to do and how to do it. We need government to provide for safety with police and fire. We need stoplights on the streets,” Goldwater said.

“But I don’t need government to tell me how to educate my children, for instance. I don’t really need the Federal government control my commerce and how I do business. But if you are a small businessman in this country today, you can’t do business without a lawyer, a CPA and people like that. You can’t afford it. There is too much regulation and making it tough for a small businessman to stay in business. So, people in Illinois need to decide what they want. They need to have a balanced budget. They need to eliminate laws of regulations. They need a strong police force and need to crack down on crime. They need leadership, that’s what they need.”

Goldwater stressed that the Republican Party is missing leadership.

“I think the country is in trouble because we don’t have the leadership that we need. It comes from the President all the way down to the Speaker of the House and the President of the Senate down to local government,” Goldwater said.

“You need good leaders who inspire people. We want to be inspired to get out and help our fellow citizens to do charitable work, to be involved in our community. But that takes leadership, leading us to do those kinds of things. Unfortunately, we have too much dependency on government. It’s like an addiction. Once we get it, we don’t want to let go of it. I think the Republican Party has a formula to get the yolk of government off our back, set us free, cut our taxes and regulations, and allow the American people to go to work. We will pull ourselves out of this problem that we are in right now and provide for the next generation.”

He added that there is a difference between Republicans and Democrats, saying, “Democrats are liberal who believe in a centralized government and who claim to be compassionate but with other people’s money. Republicans are conservative and believe man works best when free from government taxes, regulations, and programs. They will provide for himself, his family and community by having more freedom from Government. That man is a spiritual being with spiritual needs to be free.

Also featured are Congressional candidates in the 6th District like Scott Kaspar who has created a powerful Public Safety Task Force that includes one of New York’s toughest crime fighters, former Police Commissioner Bernard Kerik. Congressional candidates also in the 6th District race Gary Grasso, Robert Cruz and Niki Conforti will be there, as will Jefferey Regnier running in the 1st District.

All of the GOP’s responsible and credible candidates will be there.

In politics, the person who screams the most about mud being thrown, ugly anonymous letters and flyers being sent, and vicious robocalls being made, is usually the person who is doing all of the nasty things that are being claimed.

Additionally, Pekau whines that someone has been removing his huge political campaign signs, you know those big Pekau signs which tower over the tiny little “Cindy Katsenes” signs (a Freudian slip reflecting Pekau’s cult-like power over his devout little disciples and sycophants). Pekau says someone has damaged them, vandalized them, and stole them.

That’s not true, of course.

What the non-Republican Political Cult Leader Pekau doesn’t tell you is that vicious letters have been sent anonymously to people that are attacking me, Liz Gorman, Paul O’Grady and pretty much anyone who has ever demanded that he be accountable to the taxpayers who pay his salary.

Anonymous robocalls have gone out attacking the Gormans, and even some of his unhinged sycophants have been posting ugly vicious claims against the Gormans on social media — the Gormans have more Republican credentials and proven history than Pekau and his entire small collective could ever hope to have.

Worse is that the oversized Pekau signs, which are placed next to the itsy-bitsy little Katsenes signs, are also in violation of Placement. Under State Law, these signs cannot be closer than 5 feet from the property line, and they cannot be placed on public property. Many of Political Cult Leader Keith Pekau’s signs are in fact on public property and right up to the property lines.

The Village directs you to the State Law. 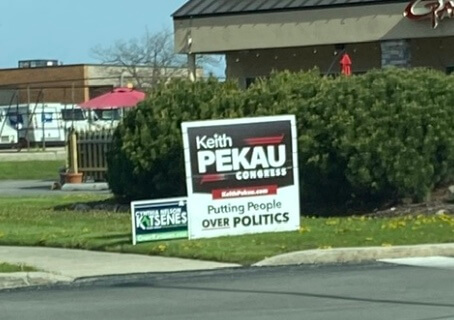 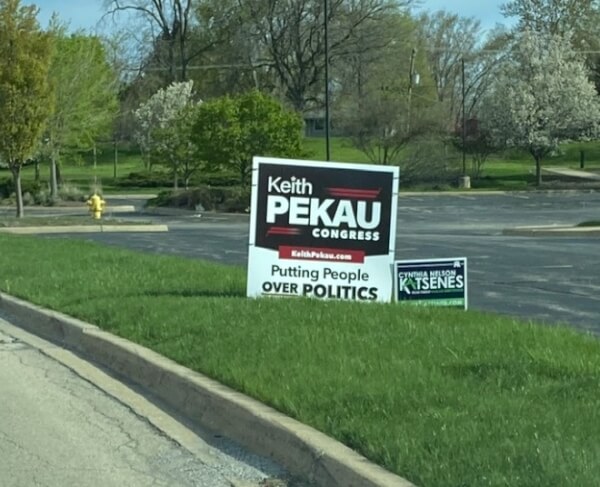 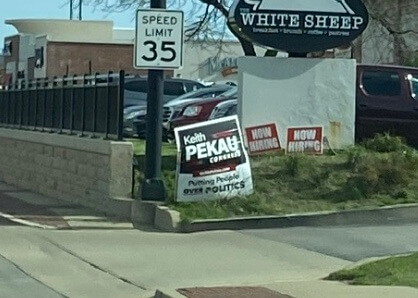 Katsenes is also attacking people personally, like on her website where she attacks everyone including me. She says I am a “hatchet man” — that’s “Award Winning Hatchet Man” to you, Cindy, a former friend who used to whine about how she never could get anyone to take her seriously. That’s what political reporters do, Cindy. We criticize politicians  and candidates who get mad when they are held accountable. Honestly, I doubt Katsenes actually wrote that. Pekau must put all the words in her empty head.

Yes, I used to be “friends” with poor little Cindy and her fearless mudslinger leader, Keith Pekau — until they tried to control me and indoctrinate me into their political cult. Pekau tried to get me to attack people and became angry when I published a press release that had nothing to do with him but that promoted Orland Township Supervisor Paul O’Grady.

When I criticize the worst of public officials, I do it openly and publicly and I sign my name every time. Unlike them.

Imagine that this pathetic ramble of non-Republicans are even attacking Barry M. Goldwater, the former California Congressman whose father is the spirit of the Conservative Republican Movement in America. No one is more Republican than the Goldwaters.

What Pekau and his coterie of schemers, including the do-nothing Cook County Commissioner Sean Morrison, have NOT done is to talk about the real issues. They only throw mud because that’s what candidates do who don’t have a single new or creative idea to protect the interests of taxpayers.

They pretend to be the victims and they throw mud because between them all they don’t have one good idea to help the taxpayers save money. They gerrymander the political system to give the Fearless Cult Leader more power and more control — like eliminating all of the village committees so that one committee that Pekau controls, decides everything.

Pekau is angry because Liz Gorman called him out in a Robocall (in which she identified herself) because after denouncing former Mayor Dan McLaughlin for taking the huge salary, Pekau took that huge $150 a year salary while serving his first term as mayor. Pekau may not be a real Republican but he is a real hypocrite.

Without his lies and mudslinging, Pekau would’t have a legitimate issue to stand on.

The future of the real Republican Party will be reflected this Friday when all of the responsible Republican leaders come together like House Minority Leader Jim Durkin, and all of the serious candidates for governor.

And by the way, Political Cult Leader Pekau asserts that everyone else is a Fake Republican because they have worked with Democrats while in office. The fact is responsible elected officials leader, once in office, work with everyone, “bi-partisan,” to get the votes needed to pass legislation to support the interests of the taxpayers. That’s called bi-partisanship, a word that doesn’t exist in Political Cult Leader Pekau’s lexicon.

And yet, he and his sycophants are supporting Richard Irvin for Illinois governor, not the ones who will be at the real Republican rally and forum this Friday. Irvin was a Democrat for most of his life. I guess the liars don’t want you to know that.

If mud is being thrown in Orland Park, it’s probably coming from Pekau’s sycophants and haters. 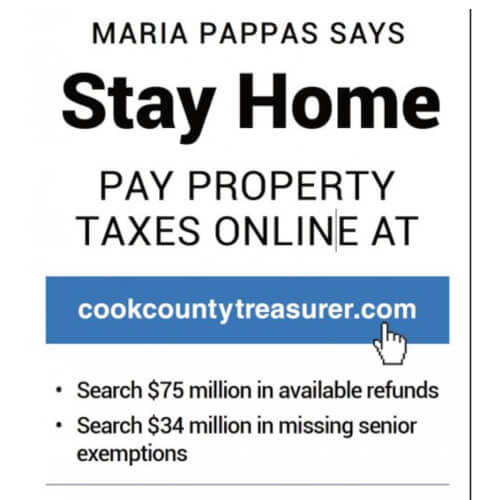