Polarization in America is empowering our enemies

As the political divide in America continues to widen, the enemies of America including Russia, Iran and China are consolidating their efforts to confront us. Instead of bringing us together, President Biden is bringing us apart and empowering those who hate us to come together

The viciousness of the fighting is weakening America’s image internationally and nations like Russia and China are being empowered to challenge our leadership of the “Free World.”

In dealing with international negotiations between conflicted countries, like the tensions simmering between Russia and the United States over Russian dictator Vladimir Putin’s threats to invade Ukraine, you need to define the extreme alternative to doing the right thing.

Biden’s biggest mistake is to take the “Threat of War” off the table in confronting Russia. The Threat of War is a powerful deterrent. History has shown that when appeasement replaces the “Big Stick,” tyrants respond with war, as it did when British Prime Minister Neville Chamberlain failed to confront Adolph Hitler’s expansion into the Rhineland, the military buildup along the Czech border and the threats to invade Poland.

We know where that appeasement led us, but I am not sure many realize we are on a similar path with Russia and China.

If Biden puts the Threat of a War back on the table in dealing with Russia’s threat to invade Ukraine, it might force Russia to back down and have a chain reaction to force China into caution. 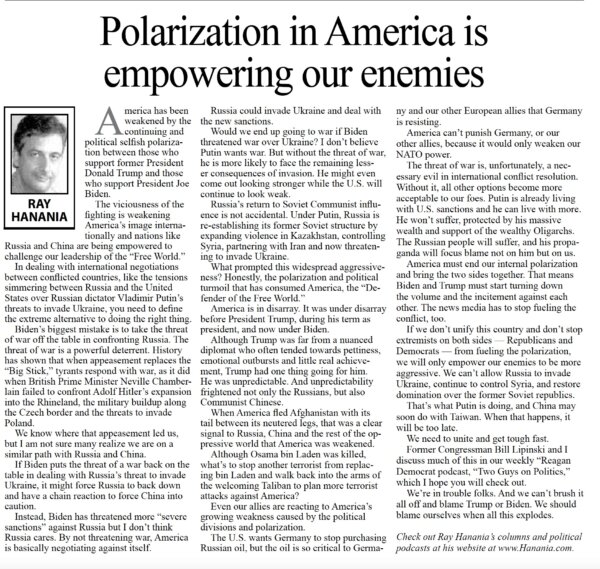 Instead, Biden has threatened more “severe sanctions” against Russia but I don’t think Russia cares. By not threatening war America is basically negotiating against itself.

Russian could invade Ukraine and deal with the new sanctions.

Would we end up going to war if Biden threatened war over Ukraine? I don’t believe Putin wants war. But without the Threat of War, he is more likely to face the remaining lesser consequences of invasion. He might even come out looking stronger while the U.S. will continue to look weak.

Russia’s return to Soviet Communist influence is not accidental. Under Putin, Russia is re-establishing its former Soviet structure expanding violence in Kazakhstan, controlling Syria, partnering with Iran and now threatening to invade Ukraine.

What prompted this widespread aggressiveness? Honestly, the polarization and political turmoil that has consumed America, the “Defender of the Free World.”

Although Trump was far from a nuanced diplomat who often tended towards pettiness, emotional out bursts and little real achievement, Trump had one thing going for him. He was unpredictable. And unpredictability frightened not only the Russians, but also Communist Chinese.

When America fled Afghanistan with its tail between its neutered legs, that was a clear signal to Russia, China and the rest of the oppressive world that America was weakened.

Although Osama Bin Laden was killed, what’s to stop another terrorist from replacing Bin Laden and walk back into the arms of the welcoming Taliban to plan more terrorist attacks against America?

Even our allies are reacting to America’s growing weakness caused by the political divisions and polarization.

The U.S. wants Germany to stop purchasing Russian oil, but the oil is so critical to Germany and our other European allies that Germany is resisting.

America can’t punish Germany, or our other allies, because it would only weaken our NATO power.

The “Threat of War” is, unfortunately, a necessary evil in international conflict resolution. Without it, all other options become more acceptable to our foes. Putin is already living with US sanctions and he can live with more. He won’t suffer, protected by his massive wealth and support of the wealthy Oligarchs. The Russian people will suffer, and his propaganda will focus blame not on him but on us.

America must end our internal polarization and bring the two sides together. That means Biden and Trump must start turning down the volume and the incitement against each other. The news media has to stop fueling the conflict, too.

If we don’t unify this country and don’t stop extremists on both sides — Republicans and Democrats — from fueling the polarization, we will only empower our enemies to be more aggressive. We can’t allow Russia to invade Ukraine, continue to control Syria, and restore domination over the former Soviet republics.

That’s what Putin is doing, and China may soon do with Taiwan. When that happens, it will be too late.

We need to unite and get tough fast.

Former Congress Bill Lipinski and I discuss much of this in our weekly “Reagan Democrat” podcast, “Two Guys on Politics” which I hope you will check out.

We’re in trouble folks. And we can’t brush it all off and blame Trump or Biden. We should blame ourselves when all this explodes.

This column was published in the Southwest News Newspaper Group Jan. 19, 2022