When a team jumps to a 17-0 lead, it’s sometimes hard to keep the focus. It’s easy to lighten up, to let the other team back into the game.

That was not the case when the Argo girls took a huge lead early against Bremen on March 5.

“We wanted to come out fast, be the front runner and establish tempo early,” Argo Coach Dan McCarthy said. “We wanted to be aggressive defensively.”

That defense helped Argo lead 19-4 after one quarter as Guerrero scored 10 points. 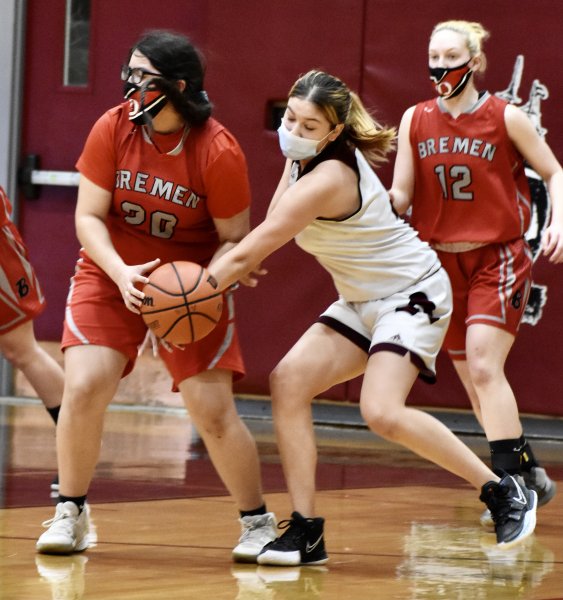 Apple Guerrero, who scored 21 to lead Argo in a 70-19 romp over Bremen, bats the ball away from Jazmin Guerrero as Alayna Morris looks on. Photo by Steve Metsch.

In the second quarter, Bremen trimmed the deficit to 12 points at 21-9 after a three-pointer by Ivy Stella. But Argo soon regained its touch, went on a 15-2 run and led 36-11 at halftime.

“We brought back the press to kind of re-establish tempo again,” McCarthy said. “We pulled the plug on it early after we got a 15-0 lead. To Bremen’s credit, they hung in there, made a little noise there. So, we redeployed full court.”

Argo’s goal was to get its transition game going early on, he said.

“We were able to do that,” McCarthy said. “We held them under 20 points. That’s a good brand of defense.”

Stevenson thought Argo’s defense played very well: “That kept us with the lead.”

Stevenson scored seven of her 16 points in the third quarter to help Argo lead 55-17.

“Sometimes, the score piles up,” McCarthy said of winning by 51.

“That’s the making of a monster and you have to build that mentality,” McCarthy said. “That’s what I’m trying to do with the girls. Tonight, they did a great job of sustaining that over four quarters.”

“It’s impossible to dig out from 17-0, and it takes a little wind out of your sails,” Thompson said. “We struggle to score enough as it is. Once you get down by that (much) then you’re extending out and starting to do stuff that wasn’t in the game plan.”

That includes forcing passes that were often intercepted.

“if it works once, it can turn into fool’s gold,” Thompson said. “They start trapping you into thinking that (pass) is available. But we went a good little run there in the first half, and we got back into the game.”

Bremen was held scoreless until senior guard MeMe Bridgewater hit a layup with just over a minute left in the first quarter.

“When we come out flat, it’s hard,” Thompson said, “I was proud of our girls for bouncing back with some energy once they were down that big. Even to the end.”

“(Argo) played a great game,” Stella said. “We just didn’t have as much energy as we should have. Some of us get really exhausted and we do have a couple injuries.”