One player on the Nazareth Academy girls tennis team has tested positive for COVID-19, forcing the program to quarantine for two weeks.

Hawkins addressed the issue in an e-mail to a reporter on Friday:

“The Nazareth Academy varsity girls tennis team has one confirmed case of COVID-19.  As soon as we were made aware of this, out of an abundance of care and caution, we asked all members of the team to quarantine.

“The quarantine has been in effect since Friday, August 28.  This was probably more than we needed to do as Coach Straface and her assistants are strictly following all IHSA protocols.  The quarantine period is coming to a close and no other members of the team have reported a positive test,” Hawkins wrote.

Benet Academy Principal Stephen Marth on Friday confirmed that Nazareth contacted the Benet school nurse on Aug. 28 with news about a positive testing.

The  Nazareth girls had played a match at Benet on Aug. 25. 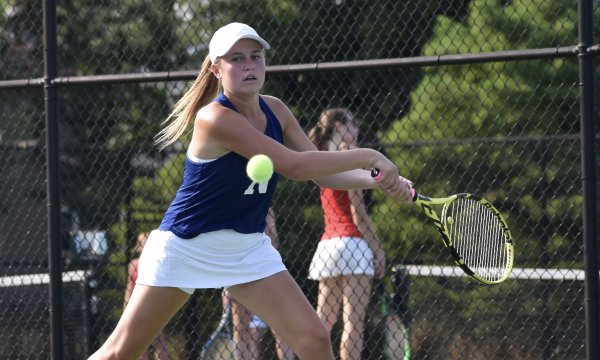 The Nazareth girls tennis team has been sidelined since Aug. 28. Senior Gabby Walsh returns a volley in the Aug. 25 match at Benet. Photo by Steve Metsch.

“It falls into the category of low-risk exposure,” Marth said.

“A letter would be sent home to (players’) families that there was that exposure,” Marth said.  “They would then have to monitor their children, if they come up with any symptoms.”

“We simply notified members of our tennis team in letter form,” he said. “Our nurse took care of that. That’s how we handle these things. It’s a way of keeping the kids safe, but also keeping their parents on guard, to be vigilant.”

As of Sept. 4, no Benet tennis players had shown any COVID-19 symptoms, Marth said. The Benet tennis team has not been shut down.

“As far as I know, it has not impacted any of our students,” Marth said.

“Because it’s considered a low-risk exposure, no mandatory testing is required.”

Workshop to Learn how to Appeal your Property Taxes Nov. 18 Cook County