The call of the sea

Mike Porfirio answers to “Clerk” at the Township of Lyons office. But in his other duties, he now can be called “Commander.”

Last year, Porfirio, who is a graduate of the Naval Academy at Annapolis, was promoted to the rank of commander in the Navy Reserve.

“It’s the equivalent of a lieutenant colonel in the Army, Marines or Air Force,” Porfirio said in his office at the Township of Lyons headquarters in Countryside.

“In the Navy, the next step is captain,” said Porfirio, who had been a lieutenant commander since 2013 when he served in Afghanistan. “It’s like anything. Increased responsibility.” 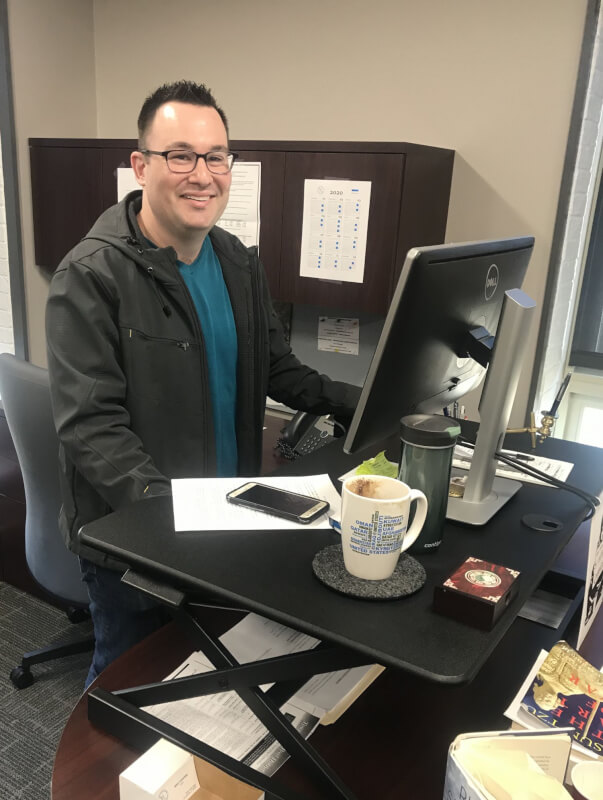 Township of Lyons Clerk Mike Porfirio, a graduate of the US Naval Academy who served in Afghanistan, has been promoted to commander in the Navy Reserve. Photo by Steve Metsch.

The higher level, bigger picture job does not have him at the Great Lakes Naval Base, where he had served as an executive officer and as a commanding officer.

“Now, I drill out of Indianapolis, Fort Benjamin Harrison,” he said. “We support commander fleet activities (at) Chinhae, the only (U.S.) naval base in South Korea. It’s next to Jinhae Naval Base, which is one of South Korea’s major bases.”

He was supposed to be there in March, but was told to stay stateside because of this year’s omnipresent game changer, the coronavirus pandemic.

His duty in the Navy Reserve has seen him work in various capacities. For example, in Afghanistan, he wore a Navy uniform but worked closely with other branches of the service.

“You can be individually called up,” he said. “I’ve done that once while I was in the Reserves. Also, you can be called up as a unit to augment or backfill.”

He expects the coronavirus to have an impact on things much like another big incident.

“The post-911 world shaped us for a long time,” he said. “A lot of our deployments and mobilizations were more Afghanistan, Iraq. As the world’s changing the future of the Reserve will mirror that.”

Korea, he said, has “some remnants of the Cold War, so it’s a good snapshot of how the Reserves function and work.”

Porfirio, 38, of La Grange, entered the Naval Academy in 2000. After graduating, he spent six and a half years on active duty, and has been with the Navy Reserve since.

He stayed in the service because he enjoys it. “I appreciate the opportunities the Navy has given me, whether that’s education, seeing the world, leadership experience.”

“I’ll always want to maybe make sure I’m repaying that debt the best I can,” he said.

“And I think when you spend a good chunk of your life, for better or worse, it becomes a bit of your identity and you want to continue to be around that type of camaraderie, team and atmosphere. I think that’s why a lot of veterans have trouble transitioning.”

“In some ways, you become almost like the old guy,” he said. “The future generation, we’re going to be fine. These kids are hungry to serve.”

He said the Navy “has allowed me to take some risks in my civilian career because I’ve had another source of income … That’s helped, too.”

Porfirio is in his second year as township clerk, starting that role in January 2019.

“We’ve improved the website,” he said. “This one is more user friendly, more navigable, more modern. A lot of times, people’s first impression is your website.”

Voter registration has been improved, too, he said, along with the hiring of election judges.

His Navy training has helped.

“It’s a combination of things,” Porfirio said. “I’ve had a diverse career where life has taken me. I’m able to understand public policy, public administration and infrastructure, and how you can leverage relationships (between government entities) to deliver service to people. I don’t think it’s one piece, but different experience and education helped bring things into focus.”

For the Township of Lyons in the coming year, “we want to continue to be a conduit of public information, when people need to know (information about local government).”

The township’s annual meeting – as for all townships in the state – was put on hold this year because of the coronavirus pandemic. The township office has taken virus precautions, too, with safety measures in place in the building.

Porfirio also serves on the Justice-Willow Springs Water Commission as the county appointee.

“We’ve helped streamline that office. We’ve even done a bit of reorganization. We haven’t passed along any (rate) increases. It’s one of the only places in the area where we have a veterans or military rate (for water). It’s kind of the same deal a senior citizen would get … Good things are happening there.”