Three afternoons each week, you can find Michael Malone sitting on a stool, playing a ukulele in front of his Indian Head Park home.

Malone, 51, plays original songs for anyone who happens to be in the 6400 block of Blackhawk Trail at noon Tuesday, Thursday and Sunday.

He’s been playing the free concerts since late March – “after we’d been indoors for a week or two” – when our shelter at home response to the coronavirus pandemic was in its infancy. 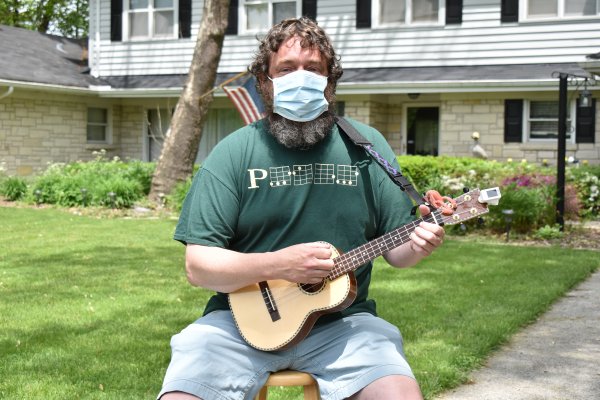 Malone credits a friend for the free concert idea.

“Chuck Wilson is a fellow ukulele player from Kansas City,” Malone said. “He was the first person I knew doing short lawn concerts during quarantine.”

Malone works from home, making phone calls for a general contractor. That permits him to “step away from my desk for a short show.”

How short? Each show lasts roughly seven minutes. Why not longer?

Malone said his original compositions “entertain me, so I hope they entertain other people.”

One big fan and a frequent visitor is swimming instructor Dan Lynch, who lives across the street.

Lynch, on May 26, requested and heard his favorite and “fantastic” Malone original called “Look, Ma, No Hands.” It’s about a kid climbing a tree.

“I ask for it every time,” Lynch said. “You hear it a couple of times, you can see him in the tree. It’s really cool.”

Malone played another original, “You Can’t Get There From Here.” It’s about his driving to Ukulele Station America, a store in downstate Oregon.

Lynch was the lone listener. But Malone has had as many as 10 people hear him play.

“I was pretty impressed with myself,” he deadpanned.

Malone even became a bit of a social media success.

“One day, I was sitting out here by myself playing, and a woman pulls up,” Malone said.

“She said, ‘Oh, I’m so glad you’re here.’ She said she saw a video of me on an Indian Head Park group on Facebook. I had no idea.”

He eventually joined the group.

Malone has played the guitar for more than 30 years, since he was a sophomore at Loras College in Dubuque, Iowa.

“I sought out people better than I and gleaned little bits of knowledge,” Malone said. “Then I picked up the ukulele, and everything came together.”

“My father, for everything he ever did well, was a terrible gifter,” he said.

“One time, he gave my mother a ukulele,” Malone said. “She never wanted it. It never got played. I picked it up one day, Googled the chords, and was playing it in 15, 20 minutes.”

If you’re ever in the neighborhood, look for a little white sign in Malone’s front yard. After Lynch dubbed Malone “The Bard in the Yard,” another friend, Stu Hutchinson, drew a picture of the bearded Malone.

Malone is having such a good time with this, there’s no farewell concert in this musician’s immediate future.

“I’ll play as long as nobody throws anything at me,” Malone said. “I do it for fun.”