Organizers of the 74th annual La Grange Pet Parade, another victim of the coronavirus pandemic, are overwhelmed by the response from the public.

Forced to cancel the parade because of the governor’s ban on large public gatherings, they had asked people to submit video clips that will be pieced together to form a virtual parade.

Molly Price, the event coordinator for Pet Parade Charities, the non-profit which sponsors the parade, said on May 22 that 180 videos have been submitted from different sources.

This year’s theme, which had been “The Roaring Twenties: Then and Now,” was changed to “Together At Home.”

You can watch the parade starting at 9:30 a.m. Saturday, May 30, on Comcast Cable Channel 6, AT&T Channel 99, and www.utube.com/LTTVonline.

The parade will last about one hour. 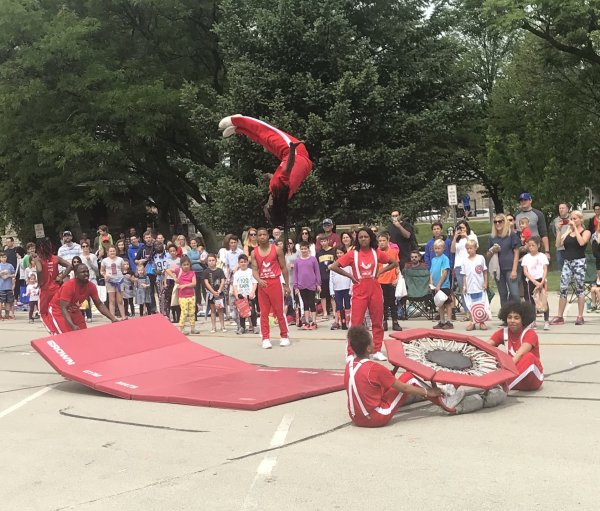 “We’re going to show some historical footage, too, to get people strolling down memory lane,” Price said. “I’m excited.”

Some sports mascots who visit each year will be featured.

“We heard from mascots. We have Tommy Hawk (from the Blackhawks). The White Sox’ Southpaw did a cute (video) with his dog … The third one was Staley the Bear (of the Chicago Bears),” Price said.

Rocker Jim Peterik, the parade’s grand marshal, submitted a video of himself playing his hit song “Eye of the Tiger,” Price said.

More music is from the Nazareth Academy and the Lyons Township High School marching bands that submitted videos via Zoom, she said.

Price called the response “a wonderful outpouring from the community because it’s a beloved tradition.’

Speaking of traditions, you will see The Shriners driving their little cars and the Jesse White Tumblers defying gravity thanks to historic footage “because everybody wants to see those,” Price said.

The first Pet Parade was held in 1947. Arguably the village’s biggest social event, this marks the first year the parade will not be held in person.

The popular Pet Parade Carnival, which includes live bands in a beer tent that weekend, was also canceled.

The parade is always held on the first Saturday after Memorial Day. Planning will soon begin for the 75th Pet Parade scheduled for June 5, 2021.