Going out in style

Glancing around the crowded parking lot filled with classic cars and car buffs of all ages, Kevin Lawrence said he will miss Dukes Drive-In.

Forty-four years of Italian beefs and – more importantly to those there  – 44 years of classic cars screeched to a halt.

Panera Bread has acquired the space.

Dukes’ last night was Aug. 31, the final lap for the longtime Bridgeview business, where car lovers have gathered for decades showing off their shiny metallic wonders and, sometimes, later racing them illegally.

“It’s a little bittersweet. It’s been here a long time. I’ve gotta say thanks to the family for keeping it going this long,” Lawrence, of Palos Hills, said.

“It’s a little bittersweet. It’s been here a long time. I’ve gotta say thanks to the family for keeping it going this long,” Lawrence, of Palos Hills, said.

There was a huge turnout Saturday night with overflow cars crammed onto the parkway two blocks north on Harlem. Police officers were on median, providing safe passage crossing Harlem.

If all goes as planned, Dukes would reopen at the old Browns Chicken site in the 8700 block of Harlem, several car buffs said. But It won’t be the same, many added.

Lawrence recalled how Dukes became THE place to be. He and other car buffs “used to hang out at 79thand Cicero by the Kmart. We got thrown out of there and Wayne, Duke’s son, said we could hang out here. So. we did. We had a place to go.”

They’d start the night at Dukes, chowing down on Italian beef “sammiches,” and often end up racing for money.

Some of the favorite racing spots were 107thStreet, 183rdand Ridgeland, Route 6, and 211thand Sauk Trail. “That was a really good one. It had an all-concrete starting line,” Lawrence said.

A few of the classic cars that came to Dukes one more time.

“Street racing was a lot of fun. I got so many tickets. My dad was a cop, so it was even worse,” said Lawrence, who still races cars for the Midwest Nostalgia Pro Stock Association.

His longtime friend Nick Messino, 79, of Blue Island, was there with his bright red 1957 Chevy named “Shake Rattle & Run.”

He called Dukes “one of the most successful drive-ins in the city.”

“We used to go from drive-in to drive-in. Dog N Suds on 94thand Cicero … the Beverly Drive-in on 95thand Ashland … we had drive-ins everywhere. There was a place in Chicago Heights called Dandy’s. This is one of the few left,” Messino said.

Asked if he had one more beef sandwich for old time’s sake, Messino smiled: “I did have a beef sandwich tonight. It was pretty good. I had hot peppers on it.”

Using a cane to walk around the lot, David Edwards, of Bridgeview, said he’s been coming to Dukes to see the cars there since 1977 when “my oldest son, Brian, and others kind of started this.”

A 50-year resident of Bridgeview, Edwards said, “I like seeing the cars, I like seeing the people I’ve met over the years. And we’ve all aged together. Most of these cars belong to a bunch of old people.”

Rich Chalupa, 39, drove up from Tinley Park with son Jackson, 8. They spent hours checkout out all the cars. A gray Camaro was Jackson’s favorite.

Chalupa said he had to be there for Dukes last night.

Chalupa said he can’t recall what he won racing, adding it was more about being with friends. He had hoped to enjoy an Italian beef sandwich, but the line, which snaked around the building, was too long.

Car buff Kevin Lizik, of Brookfield, stood near his bright yellow 1932 Ford five-window coupe, chatting with any and all curious onlookers.

His father was into cars, he said. And when he saw “American Graffiti,” the movie set in the 1950s that was about cars and drive-ins,  he was hooked.

“I saw ‘American Graffiti’ when I was 6 years old and I said I was going to build a car like that. And, lo and behold, I built as close to a replica of it as I could,” Lizik, 49, said.

Lots and lots of research paved the way. He even bought a 1/18thscale model of the car, and carefully measured each part, converting those measurements to life-size numbers. His homework paid off.

Dukes, he added, will be missed.

“It’s a little sad because these places are dying. They’re going away. No place to hang out. Most of these guys are pretty good guys all of them … It’s about hanging out and having fun and talking … The new place won’t be the same, but, hopefully, it will be fun,” Lizik said.

Kevin Lawrence, of Palos Hills, has been going to Dukes with his cars for decades.

It’ll be hard to duplicate the feeling you had at Dukes, Lawrence said.

“This was it. We’d come back from street racing and Duke would be out here himself, sweeping the place at 5 o’clock in the morning. That was Duke,” Lawrence said.

Nodding toward crowd, numbering around 50, waiting for food at 10:30 p.m., he quipped: “Look at the line. They should close more often.” 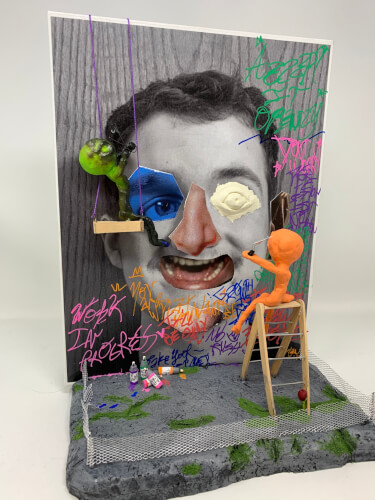