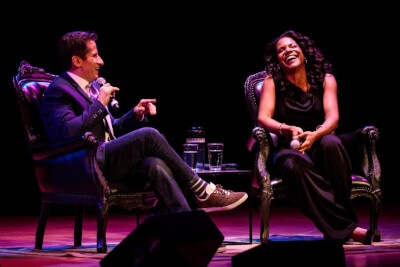 Historic six-time Tony Award Winner Audra McDonald reunites with Sirius XM Radio star Seth Rudetsky direct from their critically acclaimed performances at Town Hall in New York City this past November and the Herbst Theatre in San Francisco this past January. Produced by Mark Cortale, the unique format of this show that differentiates it from any other is a seamless mix of intimate behind-the-scenes stories prompted by Rudetsky’s insightful, funny and revealing questions – and the music from McDonald’s legendary career.

Two concerts in one evening, featuring show-stopping songs with spontaneous and humorous conversation, take place on Sunday, September 15 at 5pm and 7:30pm in the Downstairs Theatre, 1650 N Halsted St.

Following the 7:30pm performance, there will be an intimate Meet & Greet with Audra McDonald and Seth Rudetsky, where guests will have the opportunity to have items signed and pictures taken with McDonald and Rudetsky. Tickets are extremely limited and available for purchase online at steppenwolf.org or by calling Steppenwolf’s Box Office at 312-335-1650.

Tickets for Audra McDonald in Concert with Seth Rudetsky are $85-$150; Meet & Greet tickets are $75. Member pre-sale begins Tuesday, August 6 at 11am; general public ticket sale begins Wednesday, August 7 at 11am. Tickets are available through Audience Services at 312-335-1650 or steppenwolf.org. Members may use their credits for seats in the Balcony and purchase additional single Balcony tickets for $70. Students may purchase a $20 student rush ticket an hour before the show, availability abiding. Student rush tickets are available for in-person purchases only; one student ID must be presented for each ticket. Open Captioning will be available for this performance; visit steppenwolf.org/access for more information. For tickets or more information, visit 312-335-1650 or steppenwolf.org.

Audra McDonald, who currently stars on Broadway with Michael Shannon in the revival of Frankie and Johnny in the Clair de Lune (NY TIMES CRITICS PICK), holds the record for more Tony Best Performance wins than any other actor in history, and is the only person to win all four acting categories. She became a three-time Tony Award winner by the age of 28 for her performances in Carousel, Master Class and Ragtime, placing her alongside Shirley Booth, Gwen Verdon and Zero Mostel by accomplishing this feat within five years. She won her fourth in 2004 for her role in A Raisin in the Sun, a role she reprised for a 2008 television adaptation, earning her a second Emmy Award nomination. On June 10, 2012, McDonald scored her fifth Tony Award win for her portrayal of Bess in Broadway’s The Gershwin’s Porgy and Bess thus tying a record held by Angela Lansbury and Julie Harris for most Tony Awards won by an actor. In the 2014 Broadway season, she made history by winning her sixth Tony Award for her role as Billie Holiday in Lady Day at Emerson’s Bar and Grill. She also maintains her ties to classical repertoire with an active concert and recording career, performing song cycles and operas as well as concerts throughout the US. Audra’s many television appearances include four seasons as Naomi Bennett in Private Practice, as well as Homicide: Life on the Street, Law & Order: SVU, Having Our Say, Mister Sterling, The Bedford Diaries, Kidnapped, the TV remake of the musical Annie, HBO’s Wit with Emma Thompson and more recently as a cast member of The Good Wife. In December 2013, Audra won critical acclaim for her performance as the Mother Abbess in NBC’s live telecast of The Sound of Music with Carrie Underwood. As the host of the PBS series Live From Lincoln Center, she won her first Primetime Emmy Award in 2015. That same year she was named one of Time magazine’s 100 most influential people of 2015 and received a 2015 National Medal of Arts – America’s highest honor for achievement in the arts – from President Barack Obama. In 2018, she joined the cast of The Good Fight for the second season of the CBS All Access original drama series. Her film role include Cradle Will Rock, Object of My Affection, It Runs in the Family, Best Thief in the World, and Seven Servants. Ms. McDonald returned to the Broadway stage in 2016 with director George C. Wolfe and dancer/choreographer Savion Glover in the musical Shuffle Along, Or, The Making of the Musical Sensation of 1921 and All That Followed, a new retelling of an original musical by Eubie Blake and Noble Sissle, for which she was nominated for a Tony Award. On the concert stage, she has sung with virtually every major American orchestra, and internationally with Théâtre du Châtelet in Paris, as well as with the London Symphony Orchestra and Berlin Philharmonic. Of Audra McDonald’s many roles, she notes that her favorites are the ones performed offstage: passionate advocate for equal rights and homeless youth, wife to actor Will Swenson, and mother to her children.

Seth Rudetsky is the afternoon host on Sirius/XM Satellite Radio’s On Broadway as well as the host of Seth Speaks on Sirius/XM Stars. As an author, he penned My Awesome/Awful Popularity Plan and the sequel, The Rise And Fall Of A Theater Geek (Random House), as well as three volumes of Seth’s Broadway Diary featuring inside scoop and hilarious stories from all of the stars he’s worked with. He co-wrote and co-starred in Disaster! (NY TIMES “critics pick”), which also premiered to rave reviews in London. In June 2016, he and his husband, James Wesley, co-produced a recording of “What The World Needs Now” with stars like Idina Menzel, Lin-Manuel Miranda, Carole King and Audra McDonald which went to number one on iTunes and raised more than $100,000 for the Orlando shooting victims (and is still raising money. Buy it!). Seth and James have a foundation called Your Kids Our Kids that presented Concert For America, a series around the country featuring stars like Barry Manilow, Stephanie Mills, Vanessa Williams, Tina Fey, Randy Rainbow and Audra McDonald that raised money for 5 non-profits that have been working relentlessly since the 2016 presidential election. They also present Voices for The Voiceless, a yearly star-studded concert for You Gotta Believe which helps older foster children find families, even if they’ve aged out of the system. If you want to hang out with Seth and James and a bunch of Broadway stars performing up a storm, come on one of their cruises! In March 2019 they sailed to the Caribbean, and in July they sailed to Alaska. More info at SethsBroadwayVacations.com.

Mark Cortale (Producer) co-produced the critically acclaimed new Off-Broadway musical Midnight At The Never Get at The York Theatre this past October, which recently received 3 Lucille Lortel Award nominations including Best Musical and 2 Drama Desk Nominations including Best Score. He produced Deconstructing Patti on Broadway last September at the Nederlander Theatre with Broadway Cares/Equity Fights AIDS starring Patti LuPone and Seth Rudetsky. He created the Broadway @concert series in 2011 at The Art House in Provincetown, where he serves as Producing Artistic Director. The series, featuring creative partner Seth Rudetsky as music director and host, will have its ninth series this summer, and guest artists over the years have included Patti LuPone, Audra McDonald, Sutton Foster, Megan Mulllally, Christine Ebersole and Jessie Mueller. The Broadway @ series also premiered in 2013 in New Orleans, in Australia (Sydney & Melbourne) with Megan Mullally and in London’s West End with Patti LuPone at the Leicester Square Theater. The series has since travelled to cities that include Chicago @ Steppenwolf Theatre Company, Beverly Hills @ The Wallis, Fort Lauderdale @ The Parker Playhouse, San Francisco @ The Herbst Theater and Scottsdale @ Scottsdale Center for the Arts. In the 2018/19 season, the series launched in Boston @ the Huntington Theatre with Chita Rivera and at The Town Hall in New York City with six-time Tony Award winner Audra McDonald. Mark produced the feature film Varla Jean and the Mushroomheads and also produces the singing string quartet Well-Strung, which he co-founded. Info at www.markcortalepresents.com.

LookOut is Steppenwolf’s performance series that presents the work of artists and companies across genre and form, emerging artists and performance legends, quintessential Chicago companies and young aspiring ensembles, familiar Steppenwolf faces and new friends. Greta Honold and Patrick Zakem are the producers for LookOut. For more information, visit steppenwolf.org/lookout.

Accessibility
This performance will feature Open Captioning. Assistive listening devices are available for the performance, and the Downstairs Theatre is equipped with an induction hearing loop. The Downstairs Theatre feature wheelchair accessible seating and restrooms, and Front Bar features a push-button entrance, all-gender restrooms and accessible counter and table spaces.

Visitor Information
Steppenwolf is located at 1650 N Halsted St near all forms of public transportation, bike racks and Divvy bike stands. The parking facility ($13 or $15, cash or card) is located just south of our theater at 1624 N Halsted. Valet parking service ($15 cash) is available directly in front of the main entrance starting at 5pm on weeknights, 1pm on weekends and at 12noon before Wednesday matinees. Limited street and lot parking are also available. For last minute questions and concerns, patrons can call the Steppenwolf Parking Hotline at 312.335.1774.

Front Bar: Coffee and Drinks
Connected to the main lobby is Steppenwolf’s own Front Bar: Coffee and Drinks, offering a warm, creative space to grab a drink, have a bite, or meet up with friends and collaborators, day or night. Open Tuesdays – Sundays, Front Bar serves locally roasted coffee and espresso by Passion House Coffee Roasters and features food by The Goddess and Grocer. The menu focuses on fresh, accessible fare, featuring grab-and-go salads and sandwiches for lunch and adding shareable small plates and desserts for evening and post show service. www.front-bar.com

Year of Chicago Theatre
Steppenwolf Theatre Company is proud to be part of the 2019 Year of Chicago Theatre, presented by the City of Chicago and the League of Chicago Theatres. To truly fall in love with Chicago, you must go to our theatres. This is where the city bares its fearless soul. Home to a community of creators, risk-takers, and big hearts, Chicago theatre is a hotbed for exciting new work and hundreds of world premieres every year. From Broadway musicals to storefront plays and improv, there’s always a seat waiting for you at one of our 200+ theatres. Book your next show today at ChicagoPlays.com.

Steppenwolf Theatre Company is the nation’s premier ensemble theater. Formed by a collective of actors in 1976, the ensemble members represent a remarkable cross-section of actors, directors and playwrights. Thrilling and powerful productions from Balm in Gilead and August: Osage County to MS. BLAKK FOR PRESIDENT—and accolades that include the National Medal of Arts and 12 Tony Awards—have made the theater legendary. Steppenwolf produces hundreds of performances and events annually in its three spaces: the 515-seat Downstairs Theatre, the 299-seat Upstairs Theatre and the 80-seat 1700 Theatre. Artistic programing includes a seven-play season; a two-play Steppenwolf for Young Adults season; Visiting Company engagements; and LookOut, a multi-genre performances series. Education initiatives include the nationally recognized work of Steppenwolf for Young Adults, which engages 15,000 participants annually from Chicago’s diverse communities; the esteemed School at Steppenwolf; and Professional Leadership Programs for arts administration training. While firmly grounded in the Chicago community, nearly 40 original Steppenwolf productions have enjoyed success both nationally and internationally, including Broadway, Off-Broadway, London, Sydney, Galway and Dublin. Anna D. Shapiro is the Artistic Director and David Schmitz is the Executive Director. Eric Lefkofsky is Chair of Steppenwolf’s Board of Trustees.

Steppenwolf’s Mission: Steppenwolf strives to create thrilling, courageous and provocative art in a thoughtful and inclusive environment. We succeed when we disrupt your routine with experiences that spark curiosity, empathy and joy. We invite you to join our ensemble as we navigate, together, our complex world.

Please send us your press releases, event notices, photographs and Op-Eds for consideration to be included on our Suburban Chicagoland Community Newspaper website.