Congresswoman Robin Kelly, chair of the Congressional Black Caucus Health Braintrust, released this statement following the introduction of the Health Equity and Accountability Act in the U.S. Senate:

“Today, we took another important step toward expanding access to healthcare with the Senate introduction of theHealth Equity and Accountability Act. This important bill is based upon one simple premise that all Americans can support: your health should never be determined by the zip code in which you were born.

Tragically, we know the stark and shocking statistics. For the vast majority of Americans, you can predict their longevity, health and wellness based on the zip code in which they were born. In the richest, most powerful nation in the history of the world, that’s simply wrong.

While education, hard work, dedication, persistence and luck can help families move up the economic ladder, our health is deeply and fundamentally linked to the location of our birth. It’s past time for that to change and the Health Equity and Accountability Act is the first step in that much needed change.

I want to thank Senator Hirono for her continued leadership on this issue. She has always been a steadfast advocate for healthy families and communities. I know that under her leadership, this important bill will continue to receive important and necessary attention as we build towards passage.

I’d also like to thank my Senator, the Honorable Tammy Duckworth, for her leadership as an original co-sponsor.” 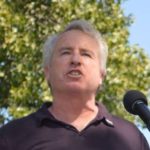