Argo has a new football field

Striding onto the new football field at Argo Community High School, there’s a noticeable “give” to each step taken.

That’s because there’s a pad that lies beneath the new Mondoturf field recently installed by Kiefer USA, based in Lindenhurst.

“We’re not calling it a concussion pad, but it’s a shock absorbent pad that’s meant to maintain the playability and the softness of the field. And, it will last two lifetimes of the top surface, Moran said.

School board member Dallis Anderson said the pad will go a long way in terms of players’ well-being.

“The one thing we were most concerned with has been addressed, and that’s the concussion factor. There’s been so much emphasis on kids in high school being hurt and not being able to take their careers any further,” he said.

“Now, we are compliant. When teams come to Argo, they know they’re playing on a safe field and that’s the most important thing to me,” Anderson said Tuesday. 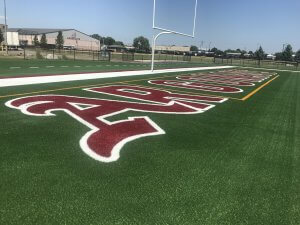 The Argonauts name is in both end zones. Photo by Steve Metsch. 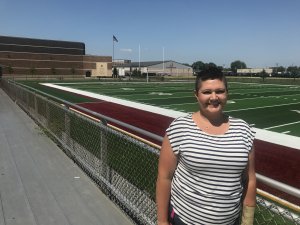 The same company has installed fields around the country, with clients including St. Charles North High School, the University of Kentucky, and the Minnesota Vikings.Photos of the new field at Argo are featured at www.kieferusa.com. Work began in late May and finished the first week of July, athletics director Becky Moran said Monday.

The school’s logo is at the 50-yard line. “Argonauts” is written in large maroon and white letter in each end zone.

“It’s beautiful,” Moran said while giving a tour. “We’re very happy with it. It turned out great.”

Anderson agreed: “It’s something Argo can be proud of, absolutely.”

Moran, her left wrist wrapped in an elastic bandage after an injury she received as a soccer goalie Sunday, said the football and soccer teams, along with PE classes, should enjoy the new field.

The turning point came last August when the field was deemed unsafe to play on. More fill – those tiny black rubber pellets – was brought in so future games were played. But the first Argo home game had to be played at Reavis High School.

Football won’t have those worries this year. Nor will soccer.

“Diehard soccer people, they want to play on grass. Having the artificial surface is beneficial for our teams, but you’re also looking for playability and this field’s going to play a lot more natural than the turf we had in the past and some of the other turf fields in the area,” Moran said.

The community will benefit: “Now, we’re not going to call the local soccer club and say ‘It rained last night, you can’t use the field’,” she said.

The use of green Ecofill pellets in the field have been deemed safer than the black rubber pellets often found in such fields. The company’s website said Ecofill “has a proven history and unsurpassed performance resume as a safe alternative to crumb rubber infills.”

Anderson considers that a bonus, not having the black rubber pellets and fibers kick up in players’ faces. “They’re not breathing that in when they’re on the field,” he said.

A bonus, compared to real grass fields, is the playing surface won’t be torn up between the 30-yard lines.

“That’s one of the nice features. This happened to me a couple years ago at a former school. We got awful rain before the last game, and we tore up our field so badly I thought it was unsafe to play on. That won’t happen here,” Moran said.

You can get your first peek at the new field when the annual Maroon and White game is played the evening of Aug. 17 as part of a grand reopening of the school year.