In a move aimed at cutting costs, Lyons is switching its water allegiance to McCook.

Lyons had been part of the Brookfield-North Riverside Water Commission to McCook for decades, but rate increases persuaded Lyons to act.

The move has been approved by the Lyons Village Board, and work is progressing on connecting Lyons’ water system to McCook’s water system.

“It got too expensive. That’s why we are switching,” Lyons Mayor Christopher Getty said of ending the longtime partnership with the BNRWC.

Lyons uses approximately 1 million gallons of water per day, according to the village, and has 3,100 customers.

The Brookfield-North Riverside Water Commission is in the process of completing improvements that will give it two connections to Chicago water. But the price tag of $17 million translates to what Lyons considers too hefty of a price increase.

The plan calls for paying an extra 8 cents for every 1,000 gallons of water used. And that 8 cents will be added each of the next seven years. Getty deemed that too costly and opted for an agreement with McCook instead.

“We will not have a rate increase and this allows us some breathing room in our rates, which we will not have to pass on to our customers, our residents and our businesses,” Getty said. 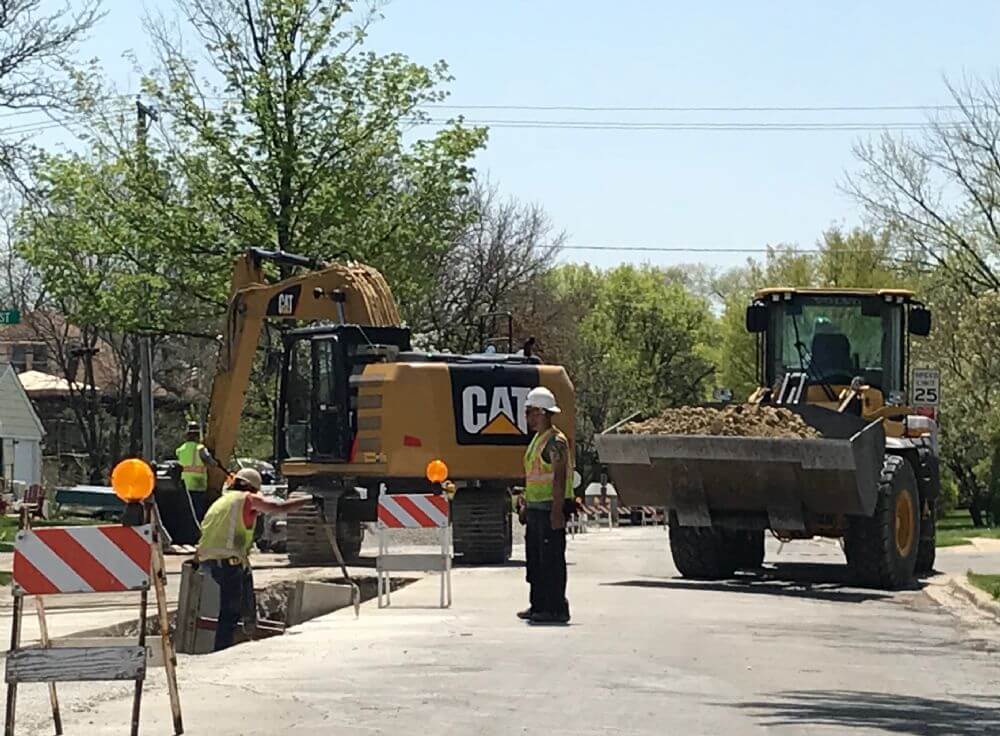 Workers from Unique Plumbing in Brookfield have been busy connecting the Lyons and McCook water systems. Photo by Steve Metsch.

Work is nearly completed hooking up Lyons’ water system to the McCook system at 47th and Custer.

The departure of Lyons leaves the water commission with the Brookfield Zoo, Brookfield, North Riverside and La Grange Park as members.

In the summer, the zoo uses an average of 500,000 gallons per day and the village of Brookfield uses about 2 million, Supt. Robert Novotny said.

Losing Lyons was not a surprise, Novotny said: “There’s always been that possibility. We saw it coming.”

Asked if it would hurt the commission, Novotny said “somewhat.”

But it also frees up 1 million gallons a day for current and potential future members of the water commission.

It will not result in an added price hike for customers, Novotny said.

Lyons has been part of the water commission since the late 1950s, when the village then blended lake water with well water before eventually going all lake water.

The change “is something that makes sense financially and makes sense geographically. Since we’ve recently made a large investment in our infrastructure, especially water, we’ll be able to execute this very easily,” Getty said.

Connecting to the McCook system will cost Lyons about $1 million, he said. That includes a new water main along Plainfield Road and connecting with McCook. Unique Plumbing, of Brookfield, is doing the work.

Meanwhile, work is rapidly nearing completion on a new line for the water commission along Fillmore Street from Chicago through Oak Park to Forest Park, Novotny said.

That will give the water commission a key second incoming line from the Chicago water system to go along with the original line that dates back to when FDR was in the White House.

The original, built in 1938, is along 39th Street and runs west from Cicero Avenue, Novotny said.

“It’s a 1938 vintage. That’s why we have to start looking at new lines. What we’ve done is, when this main was put in, they used to run it at 90 pounds of pressure. We dropped that to 83 pounds, and have since knocked it down to 70.

“That prolongs the life of the main. Less pressure. Less degradation. It extends the life of it, or we’d need a total replacement of the pipeline,” Novotny said from the commission’s headquarters in Brookfield.

Many municipalities rely on one pipe as their source for lake water from Chicago, he said. That could be risky with aging infrastructure.

“So, what we did, since 1990 we have been investigating bringing a second pipeline out from Chicago and we are talking with other agencies about joining us,” Novotny said.

A low-interest loan of 1.64 percent from the state, teamed with money saved over the years, and the rate increase is helping pay for the project, Novotny said.

“We may recapture some of our money if other agencies buy in,” said Novotny. “There will be some revenue lost with Lyons, but we’re talking with others who may be interested in joining the commission.”

He declined to name them, other than “those interested are up in the area of the pipeline,” Novotny said.

Pfleger publicity stunts do nothing to stop violence Blogger