In case you missed it, the Wolves season came to a sudden conclusion at 12:08 a.m. Friday.

That’s when Rockford’s  Victor Ejdsell scored on a blast from the right circle, the puck beating goalie Max Lagace, finding the back of the net and thus ending the 2017-18 season for the Wolves.

It came in Game Three of the division semifinals with just 2:38 remaining in the third overtime as Rockford swept the series. Yes, three overtimes, which means those in attendance – or watching at home on TV – were treated to just less than two entire hockey games at Allstate Arena.

The Wolves website said it was the longest game in franchise history, and eighth-longest in American Hockey League playoff history. It ended one minute shy of being a five-hour game.

I was among those at Allstate Arena Thursday night/Friday morning. And, yes, I stayed until the bitter end. Or is that bittersweet? It’s always a bummer to see the local team lose, but it’s even worse when that loss means the season is over. There’s no heading to Rockford for Game Four on Sunday, which I had planned to do. There’s no returning for the ultimate Game Five on Monday night, a game for which I had tickets. That’s it. Over. Done. See ya next season.

It’s not that the Wolves didn’t have their chances. Heck, they took 55 shots on goal. But consider that Rockford took a whopping 76 shots on goal. The two combined for 131 shots on goal and only seven scored. The goalies – as our friends in the Great White North sometimes say to show their appreciation for a great effort – “were standing on their heads.” 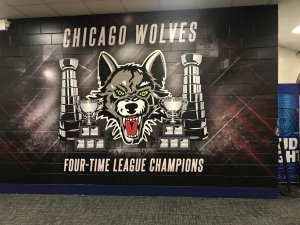 Now about that winning goal.

I was floored, as was the camerman shooting from the handicapped section where I sat, that the ref called a high-sticking penalty in the waning moments of the third overtime. What happened to that time-honored playoff rule that you don’t call a penalty unless you see blood? Evidently, it was not the case for this game. With the man advantage, Rockford managed to find the net. Seconds before, the Wolves nearly scored to win the game. In fact, both sides had numerous chances to end the game in the first, second and third overtime periods.

Now about those overtimes, I’ve got a beef with the Allstate Arena. There was no food to be found. One vendor told me “they are selling pizza” at the north side stand, so I wheeled there on my knee scooter – recovering from foot surgery – only to find the stand closed.  A worker had a huge pile of what I’m guess were pizza slices wrapped in foil. I offered him a couple of bucks for a piece. He didn’t even respond. Just looked at me. Trust me, folks, he didn’t need the extra calories.

I did mange to find some free popcorn between the second and third periods in the very cool Budweiser Brew House, a new addition to the arena, located near Section 116 the southeast corner. It’s a great place to relax between periods and kick back a few libations. It’s a place I could see watching an entire period one game thanks to what I’ve dubbed The Wolves Wall, a wall of HDTV sets.

But I digress. Back to the game.

The Wolves started the scoring and led 2-0 in the second period. That’s when Rockford reeled off three goals. The Wolves’ Wade Megan managed to tie the score early in the third period, setting up the marathon.

When that game ended, it was a weird feeling. I fully expected a fourth overtime.

My first thoughts were “that’s it, season over.” A wave of sadness swept over me. I’ve been going to Wolves games for 24 seasons. They’re easy on the wallet, fun,  and the team traditionally puts a great product on the ice. You don’t make the playoffs 19 of 24 seasons without having a good system in place.

Losing stinks. But I’m glad I was there. It’s a game fans will long remember.

Silence is not golden when eating at the movie theaters Blogger