The weed-covered former boat launch along the Chicago Sanitary and Ship Canal, once an extremely popular site in Summit, may be resurrected for boaters, fishermen and lovers of the great outdoors.

Mayor Sergio Rodriguez, at the Oct. 2 meeting of the village board, announced that he had received a letter from the National Park Service saying Summit has received a grant of “technical assistance for a recreational project” along the canal.

“This is a great opportunity for the village to really expose one of the assets we here,” Rodriguez said. 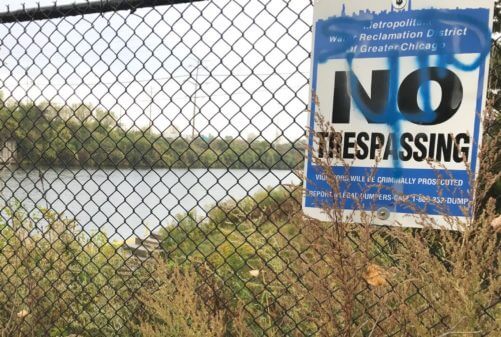 With a grant for technical assistance from the National Park Service, Summit is looking at ways of reopening its boat launch on the canal. (Photo by Steve Metsch)

When a reporter visited the boat launch on Oct. 3, he was greeted a large, empty gravel lot. The ramp leading to the water was broken up several years ago after the launch was closed to dissuade boaters from still using it. The area is fenced off. Weeds tower overhead. “No Trespassing” signs are prominent.

A Summit police officer on patrol there said that “each week, about 20 people ask about the boat launch.”

The launch is tucked away behind a towing company in the area commonly called Deep Summit. Far overhead stands an entrance ramp from First Avenue to the Stevenson Expressway .

Village Administrator Mike Porfirio said the federal grant was not monetary but would offer advice on how to bring back the boat launch along with ideas on how to best develop it.

Fire Chief Wayne Hanson said the “Port of Summit (boat launch) was a private club here and it was one of the most treasured jewels” of local waterways. Now, he said, it is “overgrown and really sad.”

Rodriguez said the site “is overgrown and gated, so you can’t get to the launch.”

The National Park Service will come back with guidelines on how to go about opening this up, he said.

“We really want make it useful resources and recreational area for the community, and for people coming around,” the mayor said.

“Our goal is to have it up and running, but really make it a recreational area where if you don’t have a boat, you can just go there and hang out. You can go fishing in canal, but I wouldn’t recommend eating what you catch. That’s another story,” Rodriguez said with a laugh.

He noted that redeveloping the area could offer access to a trail that’s back there, too.

“You can go all the way to Willow Springs. I used to ride my bike on it when I was younger. If you go north, you can connect with Lyons. So, I think it would be beneficial for the region. We have a prime location in Summit because we have the Metra (train) station. We want to see what the potential is here,” Rodriguez said.