With a laundry list of restrictions and requirements, what had been called the Presidential Inn in Lyons has re-opened under strict surveillance by the village.

The plans were unveiled at the village board meeting on May 5,  13 months after the village ordered the motel – which had a seedy reputation – closed in April 2019.

Since then, the village has been working with hotel owner Shashank Bhatt to hammer out a plan that would allow him to reopen, bring the village in much-needed tax revenue and offer a more respectable place of businesses.

Mayor Christopher Getty recalled how the village revoked the business license of SMP Hospitalities, LLC, which owned the motel.

“We revoked the business license because of incidents that occurred,” Getty said at the meeting.

After a hearing, it was determined the owners “failed to take care of people on the property,” Getty said. But in talks since, “we now feel they are in position, with a binding agreement, that they can reopen.” 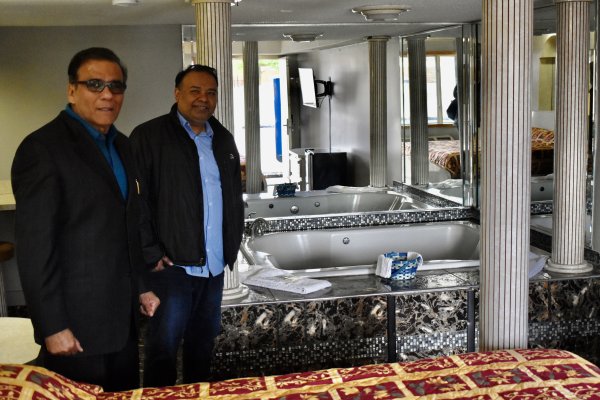 Owner Shashank Bhatt, left, and manager David Shah in one of the newly remodeled rooms at the former Presidential Inn, now called the Welcome Inn & Suites, in Lyons. Bhatt and village officials hope the motel’s checkered past is not repeated with new restrictions. Photo by Steve Metsch.

Getty wants “a very clean establishment that does not put people in harm’s way,” and “provides a safe and positive business atmosphere in our community.”

“We have a few guests,” Bhatt said as he and manager Dave Shah gave a quick tour.

Bhatt has agreed to pay $1,200 for a six-month business license, which will be renewed for another six months at another $1,200 if the agreement is adhered to. After that, a license would cost $1,200 for one year, Getty said.

After the meeting, Village Manager Tom Sheahan said “we put together some pretty strict guidelines.”

One of the managers on duty, for example, is Bhatt’s wife, Sheahan said.

“Based on negotiations and the belief that they demonstrated that they can run a safe, proper establishment, we agreed to make an attempt to reopen,” Sheahan said.

He’s confident the safeguards in place will prevent the new motel from falling into old ways. Rentals, for example, have to be for 24 hours. “No more (four-hour) naps,” Sheahan said.

Some of the restrictions are:

Bhatt said he will do whatever is needed to keep the new motel open for business.

“Everything is good,” Bhatt said. “We hope to get off to a good start.”

A new sign will be installed on Harlem Avenue, Bhatt said. There will not be a sign on 39th Street, as there was for the Presidential Inn.

Asked about the ban on using recreational marijuana, which is legal in Illinois, Bhatt said: “If they want us to keep it that way, that’s fine.”

After the board meeting, Getty said “this is a really good agreement.”

Getty especially likes the security camera system required for the parking lot, with tapes kept for seven days, and how the village can revoke the license for any violation in the first two years.

Getty hopes being shuttered for 13 months “sent a strong message” to the ownership.

CHECKERED PAST FOR PRESIDENTIAL INN

Last year, Lyons police said there were more than 500 emergency calls made from the Presidential Inn or on the premises since Jan. 1, 2013. Included were:

Podcast: The Politics of Massacres, race in America and are we great? Blogger