Mike Grace – who has spent the last 10 years learning all about wastewater, sewers, huge rainstorms and overflows – wants to bring his expertise to the Metropolitan Water Reclamation District.

Grace, 52, of La Grange, is one of 12 candidates running for three seats on the board. He is listed first on the ballot that has nine Democratic candidates.

He’s spent the last decade on the board of the South Lyons Township Sanitary District that’s in charge of sewers for Countryside and most of La Grange.

If elected, he plans to make sure the district does all it can to reduce the amount of nitrogen and phosphorus that enters the local waterways.

He’d also pay close attention to updated the infrastructure, as he did with South Lyons Township.

“The Chicago River is the biggest project now,” Grace said. “there’s going to be more activity because as soon as we get the phosphates and pollution down, that’s when you’re going to see a change and that’s my focus. Every year the river gets better, but there’s a long way to go.”

Grace, in his 26th year as a member of the Chicago Board of Trade, bought a SERVPRO franchise based in Des Plaines. After the technology boom hit, “I had to reinvent myself and got my mitigation company together,” he said.

Grace said he is comfortable telling people what he is thinking, and believes that has been an asset on the campaign trail that saw him networking at four events over Feb. 8 and 9.

“I thought that could be a problem with all this. Now, it’s my strongpoint. (People know) ‘This guy isn’t going to be forced to make decisions. He’s going to do what’s right’,” Grace said. “I’d rather do this for good than bad.”

He enjoys the South Lyons District, but want to move on to tackle the bigger MWRD. “I want to do it, because if I can make a little something good. I’m okay with that,” Grace said.

Grace recalled that when he first joined the local district, “we had callouts and flooding everywhere.”

“They had been putting Band-Aids on problems. I said, ‘You know you can apply for grants.’ I reached out to the EPA, I spoke with the engineers, and we came up with a project to do more than 80 percent of the sewer infrastructure of the South Lyons Township Sanitary District.

At the time, the district was running at a deficit. “The bills were terrible,” he said.

The district not only redid the sewer infrastructure, but wound up making related street improvements from 2012 through 2014.

“Our district is now fully funded, running at a surplus and fully funded in the IMRF retirement fund. MWRD reached out and used us as a blueprint for how a district should be run through infrastructure, through billing, the whole nine yards … Now we’re not only more efficient in preventing flooding but we’re reducing costs to taxpayers.”

“That’s really where I decided to start my campaign,” Grace said.

He notes that the district is urging installation of permeable pavers – like those installed last year at two public lots in downtown La Grange – for any new repairs.

“Not only do they bring water naturally into the ground, but they filter it,” Grace noted.

His experience for 10 years is the key, he said.

“I’ve seen what I can do with our district and the changes we’ve made and I think I’m ready for the next level. I know the issues. I know the problems,” Grace said.

And, as are many, he is concerned with the threat of Asian carp on the ecosystem should them get into Lake Michigan. He’d work directly with the Army Corps of Engineers to address the problem. 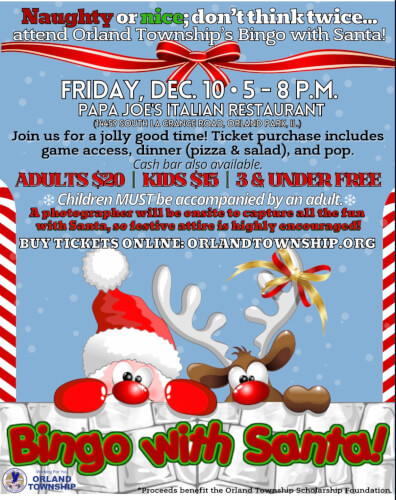