Andrew Hammond stopped all 26 shots he saw to lead the Iowa Wild to a 2-0 victory over the Chicago Wolves in Game 3 of the Central Division Finals on Sunday afternoon at Wells Fargo Arena.
Chicago (5-3) had four power-play opportunities but could not convert despite a multitude of near-misses. Goaltender Oscar Dansk (4-2) saved 18 of the 19 shots he faced, but the Wolves’ lead in the best-of-seven series has been cut to 2-1.
“We gave ourselves some opportunities to come back in the game,” said Wolves head coach Rocky Thompson. “It’s disappointing, but this is playoffs. It’s going to be a hard, tough series. We knew that. We give credit where credit is due. They played well tonight and we’ll be ready for Game 4.”
Luke Kunin scored the winner for Iowa (4-4) in the first while Matt Read added an empty-net insurance goal in the final minute. Hammond (4-4) earned his second shutout of the playoffs.
Kunin gave Iowa a 1-0 lead late in the first that would hold for almost two full periods, scoring at 17:05 after Matt Read passed the puck from behind the net to Kunin in the high slot.
The Wolves will stay in Iowa for Game 4 at 7 p.m. Wednesday on AHLTV (TheAHL.com/AHLTV). If necessary, the Wolves will host Game 6 on Monday, May 13. For the best ticket deals, visit ChicagoWolves.com or call 1-800-THE-WOLVES. 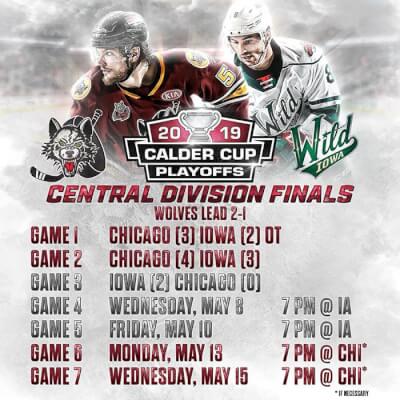