A vacant building at 8121 W. Ogden Avenue in Lyons will be the new home of Signature Cabinetry.

Owner Jay Riordan is moving his business from 7657 w. 100thPlace in Bridgeview.

He has been making cabinets for about five years. “I make them from scratch. It’s all custom,” said Riordan.

The Lyons location offers nearly three times the space as he had in Bridgeview, Riordan said. 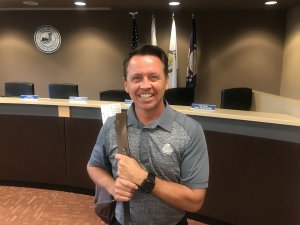 Jay Riordan, a successful home builder, is moving his cabinet store from Bridgeview to Lyons. He builds the cabinets on site. This is the currently vacant building, 8121 W. Ogden, that will be renovated for Signature Cabinetry. Photos by Steve Metsch. 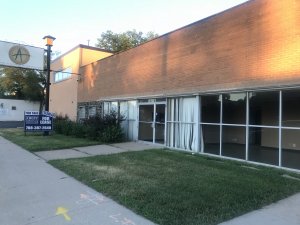 “He obviously has a very successful business, and we’re happy to welcome him here to Lyons. I think it’s going to be a good use of the building.

“It’s nice to hear he’s going to invest a substantial amount of money to bring the building up to modern standards and make it aesthetically pleasing. I think it’s a win-win all around,” Getty said.

Riordan’s business was in Bedford Park before moving to Bridgeview.

The Lyons building had been home to Specialty Game and Artisan Meats. “That building has been for sale for quite some time,” Getty said.

Riordan told the board he’s “looking forward to seeing you in town. We’ll re-do that entire building. It’s going to look beautiful when we’re done with it.”

Riordan found the Lyons site by working with Dan Chopp, of Chopp Commercial Properties in Brookfield.

Chopp said the village had been looking for a retail type business for the building “and that’s been a challenge.”

“Then Jay came along with this hybrid where he can sell retail and make the cabinets in the back. It’s a big plus between what the village wanted and what he was looking for,” Chopp said.

Riordan likes the location on busy Ogden Avenue. The move would not be possible, he said, without help from the village board

At its July 17 meeting, the board approving an application from Riordan for a Cook County Class 6B Property Tax Assessment, which he said will save him considerably in property taxes over the next 10 years. The board voted 5-0.

When a customer comes in for new cabinets, it’s a step by step process.

“We’ll gut out the existing cabinetry. We’ll do a custom design for you. You’ll bring some inspiration for what you want. I’ll finalize the design for you,” Riordan said

Riordan may look familiar. He was featured in 2014 on the “American Dream Builder” a reality TV series on NBC. Riordan finished second.