Lyons now has funding needed to pay for the demolition of vacant and abandoned houses the village has acquired.

The village board, at its May 15 meeting, unanimously approved a $180,000 grant from the Illinois Housing Development Authority to pay for demolitions of such properties.

“We’ll be able to demolish them using funds from the state. So, this program is up and running,” Getty said.

Getty said the village, at this time, won’t be using the full grant, this year, but would have those funds available when needed in the future. 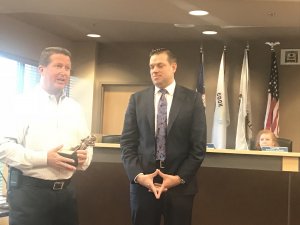 In other business, the board approved another two-year contract with Hayes Mechanical, 5959 S. Harlem Ave., Chicago, for maintenance of the village hall’s heating and air conditioning systems.

The contract will not exceed $6,000 per year, Getty said. The previous agreement was also for two years, he said.

“Suburban General was the lowest of three bidders. They came in $103,000 lower than the next bidder and more than $30,000 less than our engineer’s estimate, which is good,” Getty said.

Work on Leland will run from Salisbury Avenue to Ogden Avenue, behind Washington Middle School, and won’t start until school is out for the summer, Getty said.

The board approved spending no more than $4,000 for Getty to attend the International Council of Shopping Centers in Las Vegas this week, May 20 to May 23.

“I think it will be very positive for our community, to network and grow from,” the mayor said.

The board authorized selling scrap metal, most of which are retired water meters – many at least 25 years old or older – that have been replaced with new meters village-wide.

The board also approved spending no more than $90,000 for two new vehicles, with additional uplifting ability, for the public works department.