Who let the dogs in?

When you can’t give thumbs-up to a movie, do you wag a tail instead?

There were plenty of tails wagging in the parking lot of Bridgeview’s SeatGeek Stadium the evening of Oct. 22.

That’s when Chicago Drive-In, the outdoor movie theater located in the parking lot, welcomed dogs and their owners to a screening of an animated movie, “The Secret Life of Pets.”

Humans paid $30 per carload. Dogs? They got in for free. 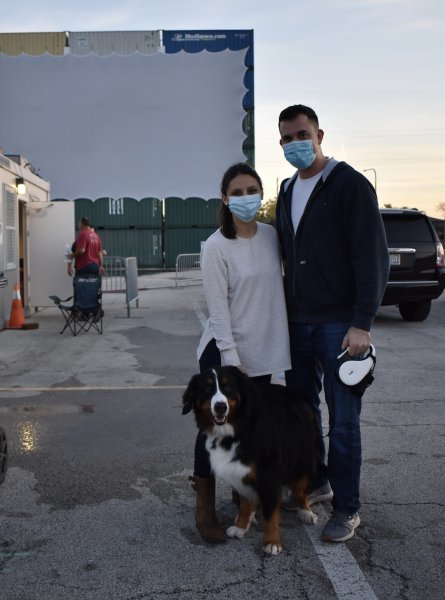 Jon Mariscal and girlfriend Sam Rezny, both of Tinley Park, brought Mowgli – named after a “Jungle Book” character – a Bernese mountain dog, to the movie night for pooches. Photo by Steve Metsch.

The unusual event was designed to offer a way for dog owners to get out with their pets during the coronavirus pandemic, and to raise money for One Tail at a Time Rescue, a Chicago based no-kill shelter for animals.

This night, the focus was on dogs like Nora, a pit bull-hound mix adopted by Tran in 2016.

The event was sponsored by Chicago Drive-in and Bark Box, which offered a free box of canine-related goodies to each vehicle.

Dozens of pet owners showed up for the movie, bringing with them a wide variety of breeds, ranging for tiny lap dogs to canines that tip the scales well over 100 pounds.

Julie Schultz, of Oak Lawn, started volunteering for One Tail three years ago.

“I love it,” she said. “Aside from helping animals, it’s a community. Everyone is there to help each other out.”

Mariscal said that the event “is fun for (Mowgli) to see other dogs and play,” adding “we’ve been wanting to come here and see a movie.

Scott Fisher, of Chicago Drive-in, was pleased by the turnout: “We appreciate everything the village has done for us.”

The drive-in will be open Friday through Sunday this weekend, and go to a Friday-Saturday schedule starting Nov. 6, he said.

“This is our first dog as a family. My kids are 22 and going to be 25. Now that the kids are older, we have time to have a dog,” Jennifer said. 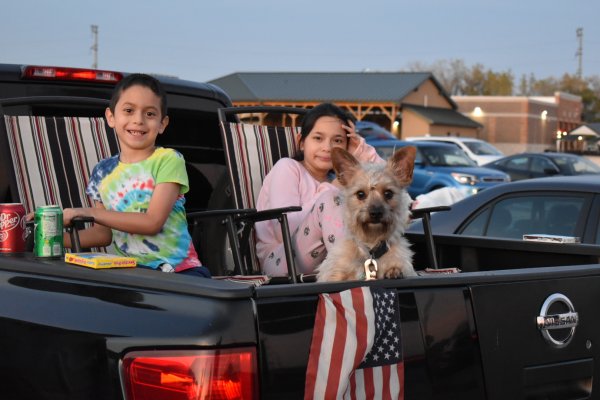 Who is more excited for their first drive-in movie,  Noah and Isabella Palafox or their terrier Teddy? Photo by Steve Metsch.

Sitting in the bed of a pickup truck, Noah and sister Isabella Palafox, of Cicero, were ready to watch their first drive-in movie with their terrier named Teddy.

Their uncle, Daniel Palafox, said he “thought it would be a good time” for the family.

“I hope she enjoys it many more times,” Uncle Daniel said.

“Back in the day, you’d get into the trunk. It was funny. You show up alone. They’d say, ‘Come on, you’re going to the drive-in by yourself? Open that trunk.’ And you’d see all these people come out,” Daniel said as he and David laughed.

Before the movie, comedians Tyler Fowler and Vik Pandya provided laughs by performing routines on a loudspeaker for the crowd.